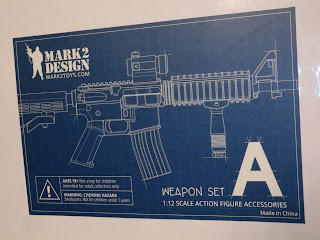 I've always been loved the accessories that come with an action figure. Honestly, cool accessories are probably the biggest selling point for me when it comes to attracting my attention to a new toyline. When I was in middle school and even into high school, I had a big plastic case that I stored lots of loose accessories in: G.I. Joe gear, the fantastic weapons from Coleco's Rambo line, the cool extras from McFarlane's Metal Gear Solid series, the spy gear from Tradewinds Toys' Mission: Impossible line, and anything else I had from random toylines. Me and a couple friends would create a "mission" and then take turns selecting which gear our agent would use to carry out the mission. It was more like role-playing as we'd discuss why and how our chosen gear would work to help us complete the objectives using our extensive knowledge of video games and spy movies. Anyways, that's a long way to preface the fact that I love picking up more accessories and weapons for me action figures and we're in a golden age of 1/12th scale accessories. Mark 2 Design is a new small business from Mark, the guy who contributed weapons sculpting to Valaverse's Action Force line. Those figures have some fantastic weaponry and now Mark 2 Designs is selling some of their own sculpts in very affordable packs. I ordered both sets available and they arrived very quickly. Today I'll start with Weapon Set A which includes eight 1/12th scale firearms to use with a variety of 6 inch scaled action figures. Let's take a look after the break.... 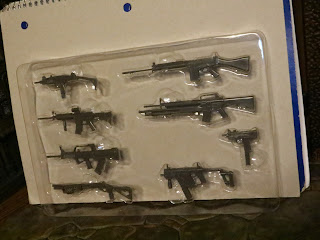 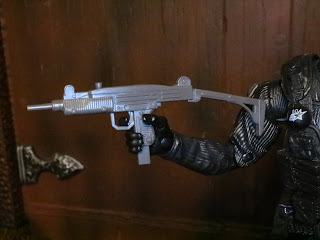 * First up is a standard Uzi with an extended folding stock. The folding stock is a permanent piece and doesn't really fold, but it's really cool to see it sculpted here. This is a wonderfully detailed sculpt of one of the most recognizable weapons in the world and it makes a great supplement to many figures. I've got it it here in the hands of Snake Eyes and he seems pretty happy with it. The extended stock can be a bit of a hassle in some poses but I do like that it was included here, as it really helps this sculpt to stand out. 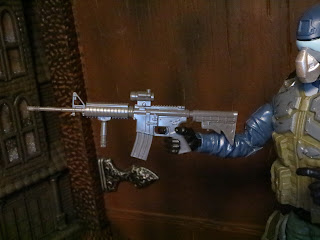 * Another weapon that could be very much a standard issued weapon for any army builders you might have is what looks to be a M4A1 rifle with an optic scope and a vertical forward grip. The sculpts are very sharp and very accurate on all of the weapons from Mark 2 Design and this rendition of the M4A1 has some fantastic detail. I'm not sure why the weapons were molded in grey rather than black. Perhaps it makes them easier to customize with paint? 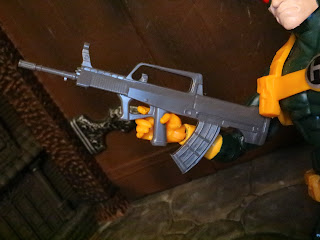 * The most unusual weapon in this set might be the Norinco QBZ-95, a Chinese bullpup styled rifle with a rather modern look to it. The design is quite impressive and since it's a bit larger, it fits figures like Marvel Legends quite nicely. The angular design of the trigger guard and the forward sight is just really cool looking and unusual. 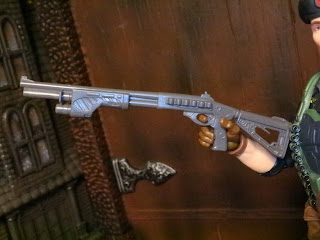 * I believe this is some version of a Benelli shotgun, maybe an M4? It's a sleek looking weapon though it does seem a little small for a standard 1/12th scale figure. The design is great, though, especially the more ornate stock and the rack for storing extra shells. 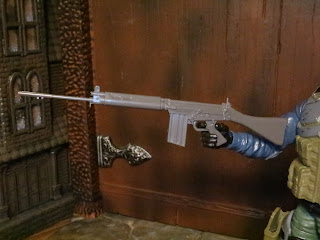 * The L1A1 SLR, the British version of the FN FAL is an older rifle but some folks may want to use it with their British members of Action Force for old times; sake. It's a very long rifle with a long, thin barrel, so be careful. I always assumed that Crankcase from the vintage G.I. Joe line came with a version of an FN FAL, so if you're making a custom Crankcase for your6 inch collection this might fill in or you nicely. 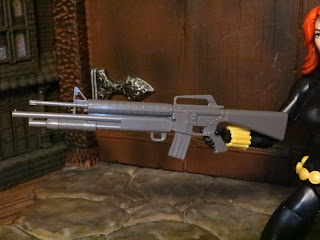 * Another very standard weapon included with the set is an M16 series rifle with an underslung shotgun. Weapon Set B has two more M16 variants, so there are quite a few options for outfitting a squad of troops with matching rifles with different attachments. 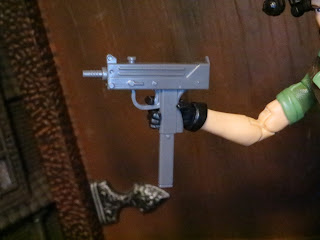 * The MAC-10 is another recognizable submachine gun from multiple movies and video games and it makes a great weapon for your figures. I love the big, boxy look of this piece and that extended magazine. 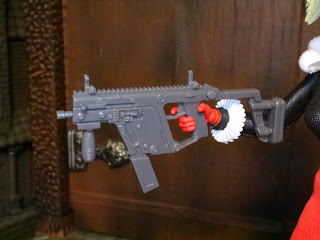 * Last up is a TDI Vector, a compact and ultra modern submachine gun. This think looks perfect with the more modern G.I. Joe Classified Series figures, Action Force, or anyone you want armed with something that looks pretty fearsome. This might have the most detailed sculpt of any accessory in this set and it's probably my favorite from Weapon Set A. 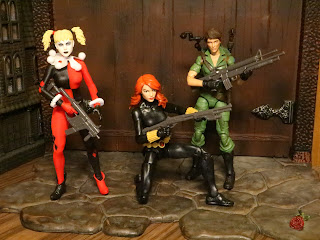 * While a few of the weapons can be on the smaller side for some 1/12th scale figures, they would really well with most women. Here's a Mezco Harley Quinn, a Marvel Legends Black Widow, and the G.I. Joe Classified Lady Jaye, all armed with weapons from this set. They look fantastic, right? It sounds like Mark 2 Design has plans for more weapons and firing effects in the future and it's always nice to see more options for 1/12th scale figures on the market. The price on these is quite reasonable (less than $2 dollars a weapon) and the sculpts and detail are top notch. My only complaint is that a couple of the weapons feel a bit too slender and the light grey plastic, while showing detail nicely, could stand to be a bit darker. Still, I'm loving these and Weapon Set A definitely earns a Good and a 1/2 from me. There's some nice bang for your buck here if you decide to order a set or two.

This is the first set from Mark 2 Design I've reviewed.