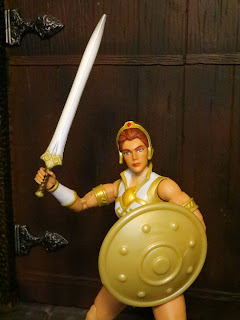 Mattel really supported Masters of the Universe: Revelation in Masterverse (or did MOTU: Revelation really just support Masterverse?) and we're still getting figures from the show. Today I'm checking out the "Classic" version of Teela from Masters of the Universe: Revelation. This is how Teela appears in the first episode and in the flashback segments. Mattel released the "Modern" Teela last year but since she's such a popular character she's definitely deserving of two figures. I feel like I said everything I wanted to say about Teela's role in MOTU: Revelation in that review so no need to retread old ground, right? This is a cool figure and definitely captures a classic Teela look with a few new elements thrown in for fun. Let's take a look at Teela after the break... 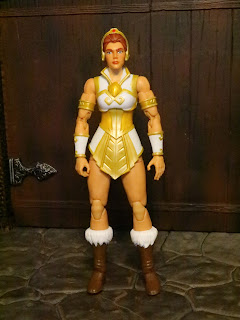 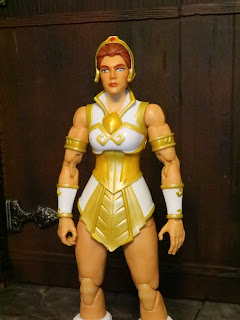 The Positives:
* Teela is a completely different figure from last year's "Modern" Teela from MOTU: Revelation. The only shared parts are her hands. Teela's outfit honestly reminds me more of her 200x outfit versus her vintage or Filmation appearance, but it's still a very recognizable look for Teela. It features a mixture of white material and gold armor that sort of sets Teela apart from your standard Eternian soldier. She's the Captain of the Guard and supposed to be promoted to the rank of Man-At-Arms so her father, Duncan, can retire, so it's perfectly acceptable that she stands out. The sculpt and paintwork are pretty nice and I really like the shiny gold used here. 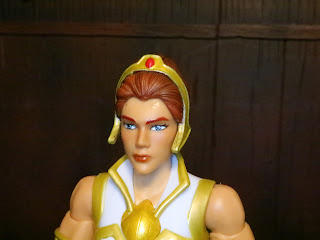 * Teela's classic headsculpt is really good. Her face is lovely, the color of her hair is perfect, and the tiara/ headpiece matches the rest of the outfit. 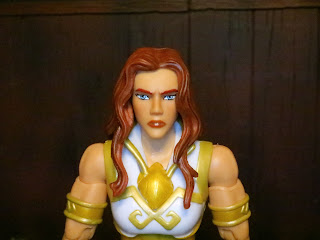 * I love that Mattel included a portrait for Teela based on this specific look. It's a pretty key scene in the show and definitely a key Teela moment. 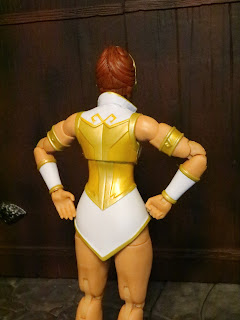 * The back of Teela's outfit is also nicely detailed with lots of fine work on the details of the armored pieces. 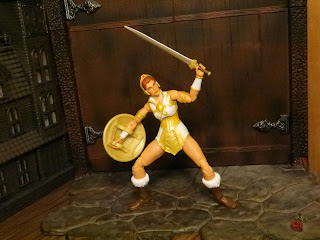 * Overall I'm still a fan of the articulation in this line. It's probably one of the best lines in terms of the quality of the figure builds and articulation scheme that Mattel has put out. Teela moves nicely and has plenty of useful joints with a great range of motion. She's plenty sturdy and looks great in battle. 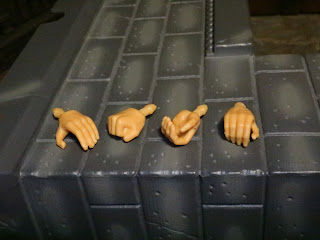 * This version of Teela comes with the same four hands as the previous release, and you can swap them out easily. She has a right fist, a left gesture, and a pair of standard grips. 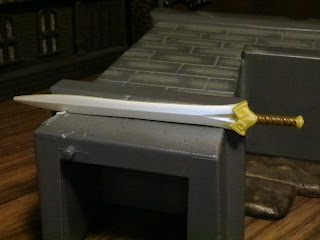 * Teela's sword is pretty sweet. It looks really sharp and has some nice paint applications to bring out the detail in the hilt. It's a pretty lethal looking blade. 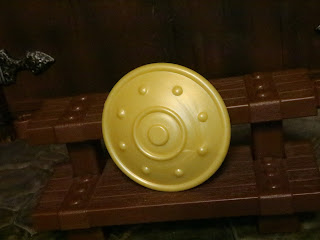 * Teela's shield is rather basic and could definitely use a few paint applications but it does have functional straps on the back rather than a wrist clip. She can hold it quite easily. I'm pretty sure it's the same shield that Stinkor comes with, just molded in gold instead of blue. 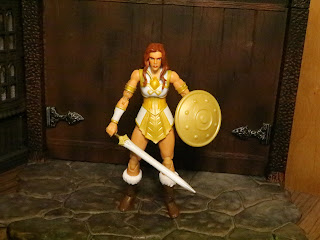 I like the Classic version of Teela a but more than the Modern version, particularly because of the alternate portraits. It's pretty cool to get two unique headsculpts for Teela, especially the absolutely crushed and furious looking Teela from the show. Her shield could have a bit more detail but her sword looks fantastic and the figure overall is really well done. Teela gets a Great and a 1/2 from me. I'm always excited to add another Teela to my collection and this one is a real gem.

I've reviewed so many toys of Teela that she has her own review archive. Check out Teela: Warrior Goddess for all of my Teela reviews.