Something Has Survived!: Mini Dino Multipack from Jurassic World by Mattel 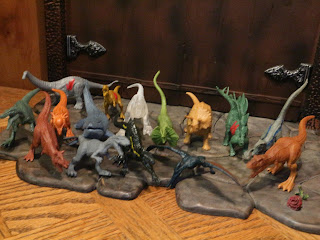 For Father's Day I got some great cards from my daughter and wife and two really cool gifts. The first gift is this very cool 15-pack of dinosaur minifigures from Mattel's Jurassic World line. Sold in a package with each figure in a plastic tray, this set gives you fifteen nicely sized dinosaurus (they're a bit larger than what you might think of as being minifigure sized, but they work really well for dinosaurs) for $10 bucks. That's a heck of a value! They feel very solid and just a bit rubbery, kind of like a M.U.S.C.L.E. figure, which I love. Mattel has some great Jurassic Park product out right now and this Wal-Mart exclusive set is pretty impressive. My daughter and I had a blast with these Sunday afternoon and I anticipate them making their way to playtime quite often. Let's check out this Mini Dino Multipack after the break. 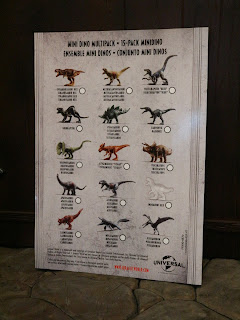 Articulation: Mosasaurus has a hinged lower jaw, no articulation on the rest. 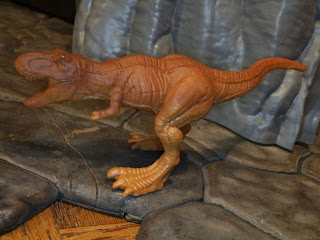 * A Tyrannosaurus Rex has appeared in every Jurassic Park film and is undeniably the star of the franchise. This T. Rex greatly resembles "Rexy" from Jurassic Park and Jurassic World and even has a nice bit of color shading to give her the brownish-red skin tone she is known for. 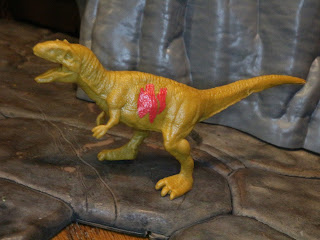 * Metriacanthosaurus is a dinosaur that we have yet to see in a film although the species was one of the embryos Dennis Nedry was supposed to steal in the original film. This carnivore from the late Jurassic Period is molded in a mustardy yellowish-tan and has some painted on "battle damage" on its left side. 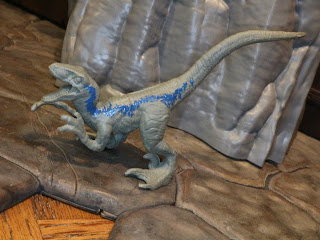 * Blue has become a well know character thanks to her significant presence in Jurassic World and you're going to find her appearing on most merchandise available. I love the pose here and the presence of the painted on blue stripe. She looks pretty fierce, as if she is just preparing to pounce on her prey. 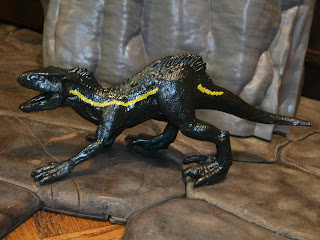 * The big baddie from the upcoming Fallen Kingdom, the Indoraptor is positioned in his "down on all fours" pose which makes him look kind of like a dragon. The yellow stripe across the side is also quite terrifying, almost like the coloring on a venomous snake. 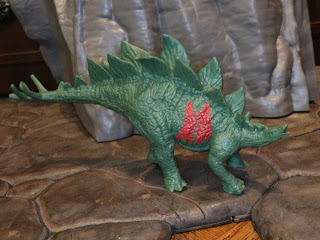 * The stegosaurus is one of the most popular dinosaurs but didn't show up in the Jurassic Park series until The Lost World (it was one of the embryos Nedry attempted to steal, however). I love the sculpt here and the powerful looking tail. The Stegosaurus also has some battle damage on its side which, again, is simply painted on. 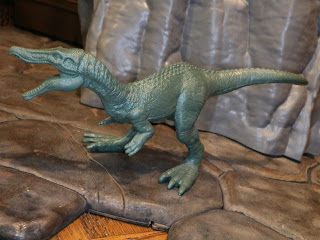 * The Baryonyx should be appearing in Fallen Kingdom, and to this I say "Finally!" The Baryonyx was listed on park maps for the original Jurassic Park and even gets a mention in Jurassic Park III. I'm looking forward to seeing one onscreen, aren't you? The long, crocodile like snout is wicked! 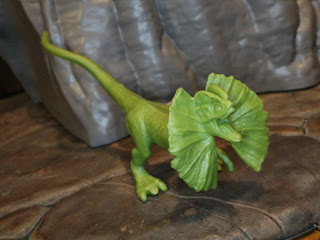 *The Dilophosaurus is another of my favorites thanks to owning a few of the Kenner versions of the dino as a kid and the creature's prominence in both the novel and the original film. The pose on this one is great: I love that she's in mid-spit with her crest fully extended! This is a pretty detailed mini in a lovely shade of green. 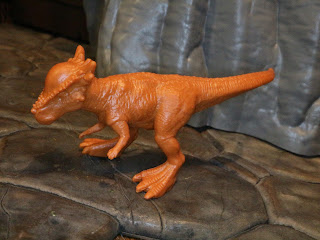 * The Stygimoloch has a pretty sweet name, meaning "demon from the river Styx" and resembles a Pachycephalosaurus quite a bit.  Whether it's an entirely different species from the Pachycephalosaurus or a younger version of the species is still up for debate. The Stygimoloch, called "Stiggy" here, appears to play a fairly significant role in Fallen Kingdom as she appears in toy form quite a few times. 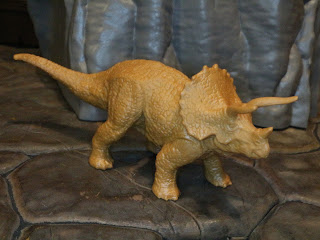 * The Triceratops is another impressive sculpt (although I would have preferred a bluish-green color) of a dinosaur that appears in some way in all of the Jurassic Park films thus far, most memorably in the original film. My kid calls this one "the one who got sick because she ate the rocks" due to the illness of the Triceratops in the first film. 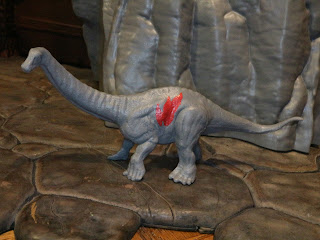 * Not to be confused with the Brachiosaurus from the original film (which Tim mistakes for a Brontosaurus) the Apatosaurus first appeared in Jurassic World. This Apatosaurus has some painted on "battle damage" which is quite fitting, as the Indominus Rex slaughtered a bunch of these in the film. 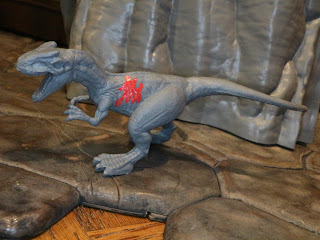 *  The Allosaurus is another pretty cool larger predator that hasn't appeared in a film yet. Yeah, there is a hologram of the Allosaurus in Jurassic World, but I'm not sure that counts. This one is supposed to appear in Fallen Kingdom and I, for one, am excited. The sculpt is quite nice here and we get another damaged figure with painted on blood. 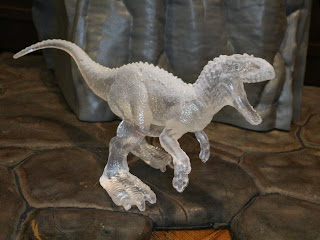 * A genetically created dinosaur and the primary antagonist of Jurassic World, the Indominus Rex is pretty darn frightening. Able to camouflage itself due to its mixture of different types of animals, Mattel has given us the Indominus Rex in translucent plastic with a frosted stripe along its back. This is a pretty cool model and a treat for lovers of clear minifigures. 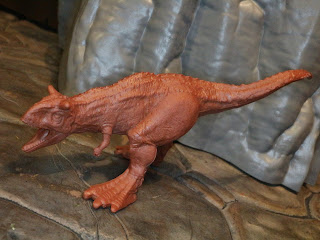 * Here's another species that will be new to the Jurassic Park franchise in Fallen Kingdom. I really dig the look of the Carnotaurus and I'm excited to see it cause some havoc in the new film. Fallen Kingdom seems like it is going to be quite the treat for fans of dinosaurs, doesn't it? This mini has some great sculpting and a cool, snapping pose. The coloring is nice, too, and fits the devil-bull look of the dinosaur. 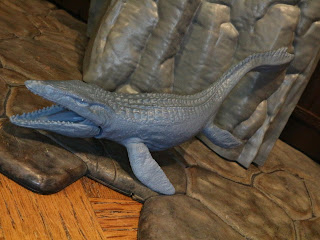 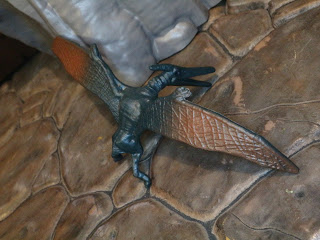 * Last, and maybe kind of least, is the Pteranodon. I dig the actual dino (the aviary scene in Jurassic Park III is incredible and I love their appearance in Jurassic World) but the figure can't really stand. I guess that's cool for "flying" poses, but how do you display this? The multicolored wings are a nice tough, though. 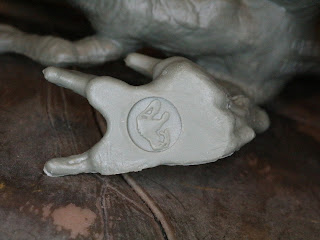 * On the bottom of a foot (or wing, or flipper) on each dinosaur is the little Jurassic Park logo. Considering how many "generic" dinosaur toys are out there, it's always cool to see official Jurassic Park merchandise branded in some way. 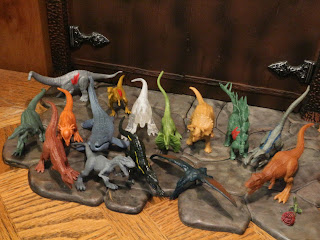 Again, I want to reiterate that you are getting 15 fairly large dinosaur minifigures, some with a paint application of some sort, for $10 dollars. That's a heck of a deal. These are way better than anything you'd find in a gumball machine or at a dollar store. A few more paint applications would have been welcome or even a few more articulated jaws, but overall it is tough to argue with this set. There is a lot of play and display value here for kids, collectors, and fans of minifigures alike. $10 is a steal and this is a Great and a 1/2 set.

If you're a fan of Blue, I have also reviewed the Battle Damage Velociraptor "Blue." I have reviewed one other generic Velociraptor, too: The Jurassic World: Legacy Collection Velociraptor.


If you're interested in the Indoraptor check out my review of the super-articulated Indoraptor from the regular Jurassic World line.


Do you dig the Carontaurus? If so, check out my review of the Jurassic World Carnotaurus.