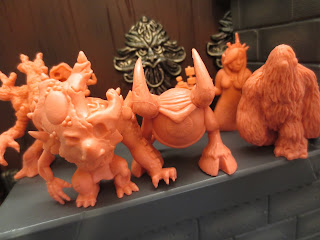 It's been almost two years since I originally reviewed OMFG series 3!  It's taken some time but October Toys has finally counted to 4 with their signature Kickstarter backed minifigure line. While there are many toys originating on Kickstarter these days, OMFG! is the first line I remember showing up there and succeeding. Can anyone recall anything else? Anyways, if you've ever held a M.U.S.C.L.E., a SLUG Zombie, or a Monster in My Pocket minifigure, you should know what to expect: These guys are small (around 2 inches, give or take depending on the characters) solid plastic unarticulated minifigures. They're all the same shade of pink, like M.U.S.C.L.E., but are available in different colors from different sources. They come packaged together in a very cool little blister pack that's very evocative of 1980's styled packaging. Fans submit these designs and then vote on who was included. Ready to see who showed up? Then join me after the break... 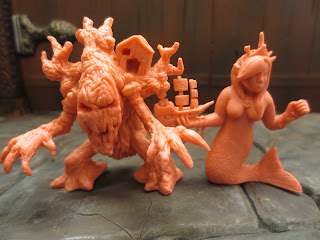 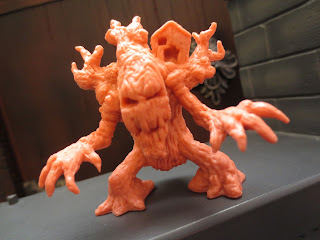 I'm always in the mood for killer trees. Always! This guy is pretty large and has some wicked sculpting. I love the detail on his bark and his terrifying face. Also, what is up on his shoulder? A shed or a barn of some sort? It seems larger than just a treehouse. Is this guy an entire forest come to life? That's awesome! Tree Witched is like the crazy friend that the Ents conveniently "forget" to tell about upcoming Entmoots because he's a total  jerk, never brings refreshments, and always wants to talk about nothing but his sex life. 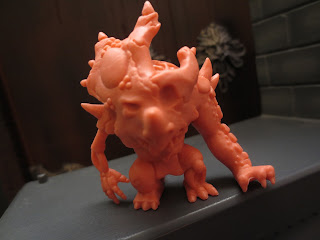 Fossil Freak is really creepy. He's kind of like the result of a really bad Pokemon experiment. Remember in the original Blue and Red Pokemon games when you collected the fossils and used some machine to turn them into an ancient Pokemon? Well, here's what would happen in real life. You'd get a half flesh, half fossilized bone creature running around. This guy is quite hideous which means he's also really fun. I'd love to see an army of dinosaurs like this in a future Jurassic Park sequel! 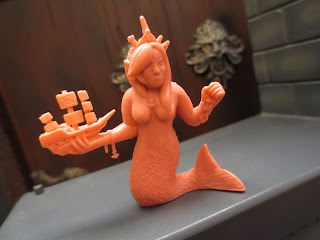 The Siren
designed by Corwin Webb
sculpted by George Gaspar

I'm really intrigued that the Siren was chosen as she doesn't seem nearly as extreme as the typical characters that win the OMFG! fan votes. What's cool, though, is she does appear to be a giant. If that's a real ship she's holding, as opposed to a model ship, then she's massive. She's also using various nautical items as jewelry. 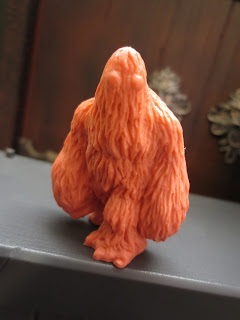 For some reason this guy reminds me of the rat creatures from Bone. The eyes are very prominent, somehow peeking out from under all of that fur. Interestingly, he also reminds me of Stroll from OMFG1 series 1. This guy is the least unique figure in the set, but he's still pretty well done and fun. I like the lumbering pose that has Wooly Wisp's foot stepping forward and his head cocked to the side a bit. It'd be interesting to have a few of this guy and make a small army of him. 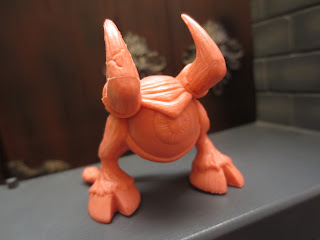 This is an eyeball. With horns. And hooves. And a tail. Oh, he's got bull-like features! I get it! He's a creepy fellow and would probably go well with Cuddlehard from series 2. Bullseye does the seeing while Cuddlehard does the talking. Now we just need a nose and an ear OMFG figure. Someone design those and get right on that! 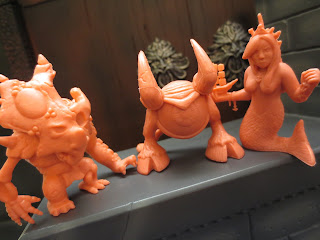 In order of most favorite to least favorite, I'd rank these: Tree Witched, Bullseye, the Siren, Wooly Wisp, and Fossil Freak. This is a pretty nice set of minifigures and, for about $2 each, that's a great deal. Even though I'm not sure I have any figure in this set that surpasses my past favorites from previous sets like Grim Gourd, Barbarianaut, Fruit Punch, Phantom Outhouse, or King castor, they're still all really fun. Overall I'm giving this set a Good and a 1/2. OMFG fans and minifigure collectors in general should be pleased to scoop these up. Plus, October Toys usually throws some extra little goodies in when you order such as art prints or posters, so why wouldn't you add these guys to your collection?

I've reviewed plenty of other October Toys minifigures, including: