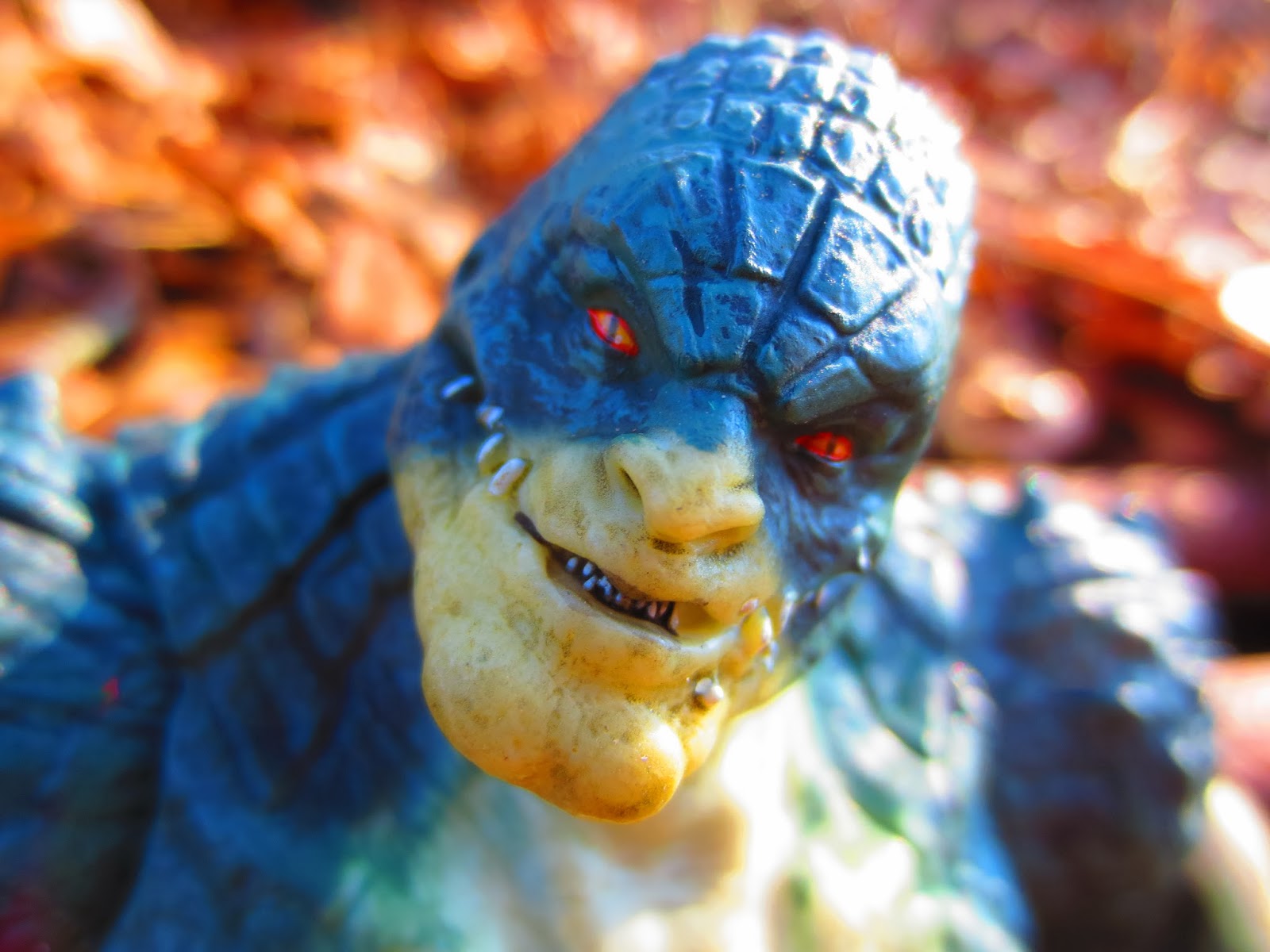 Arkham Week continues at ThEpic Review with a look at Killer Croc from DC Collectibles' Batman: Arkham Originsseries 2. Killer Croc, A.K.A. Waylon Jones, is one of the eight assassins hired by the Black Mask to kill Batman on Christmas Eve in Gotham during the events of Arkham Origins. Croc's appearances have always waivered between two looks: a more humanoid look with no tail and a more human face and a truer crocodile like appearance with a longer snout and a tail. While Arkham Asylum and Arkham City (which in continuity take place after the events of Arkham Origins)feature a more crocodile like Waylon Jones, Arkham Origins presents him in his more humanoid form. He's still massive and scaly with reptillian eyes, but he isn't yet the full blow beast that we know he'll become. Ready for a look at Killer Croc? Then join me after the break... 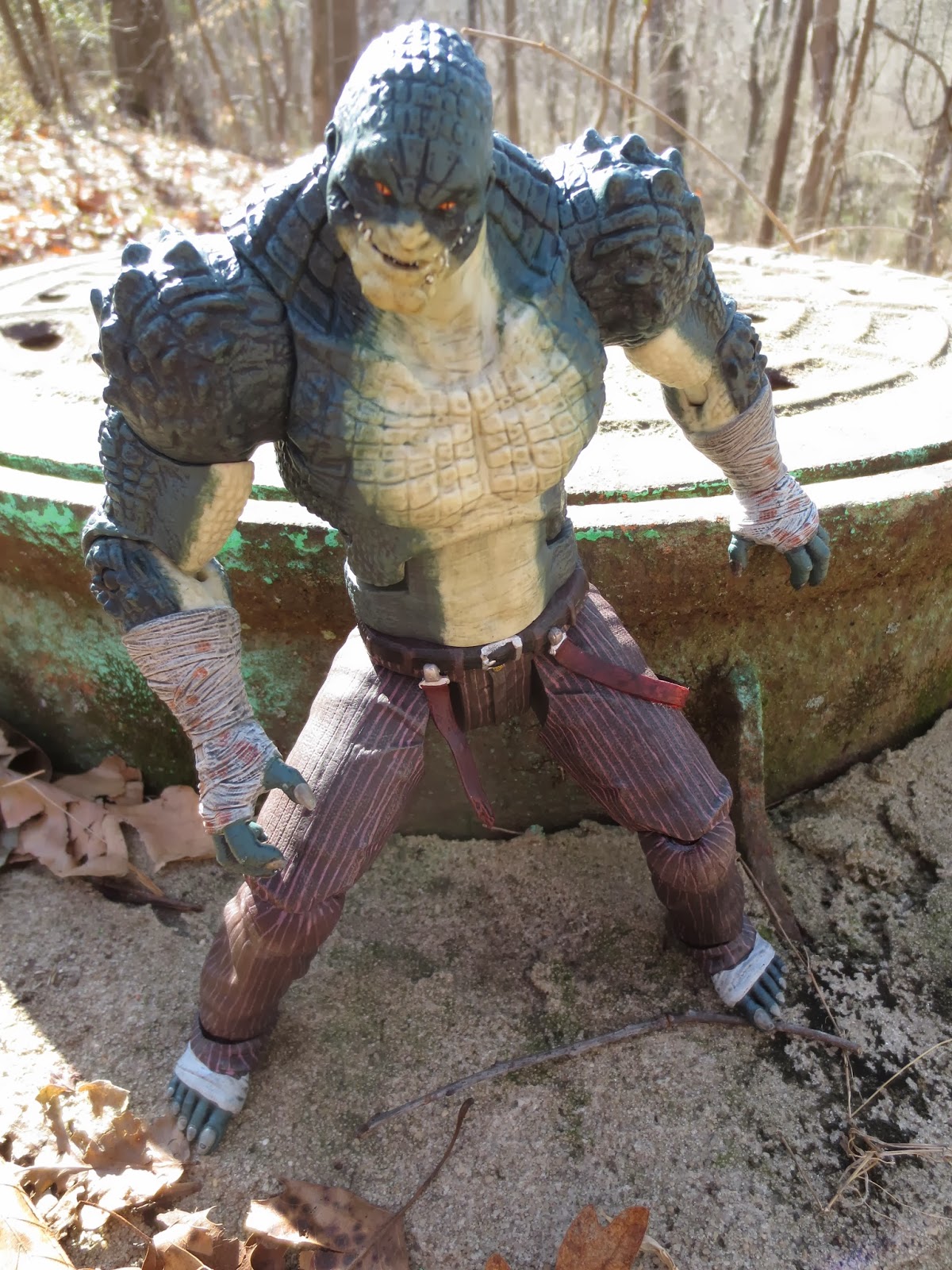 DC Collectibles advertises this figure as being 10 inches and they're absolutely right. He towers over most of the other normal sized Arkham-verse figures, but guess what? He doesn't cost any more than the rest of them. He's quite heavy (he weighs around 2 lbs.) and is definitely one of the largest and most imposing figures you can purchase for the money. Much like Banefrom series one, Croc comes in a box rather than one of the easily openable clamshells that DC Collectibles is using for most of this series. He has a great look to him that while capturing the in-game character model still wouldn't look out of place with any comic based Batman line. As seems to be the case with a number of larger super heroes and villains, Croc rarely has one set size. That means he'll look good with any of your larger DC lines (or any toyline where you need a giant crocodile man). 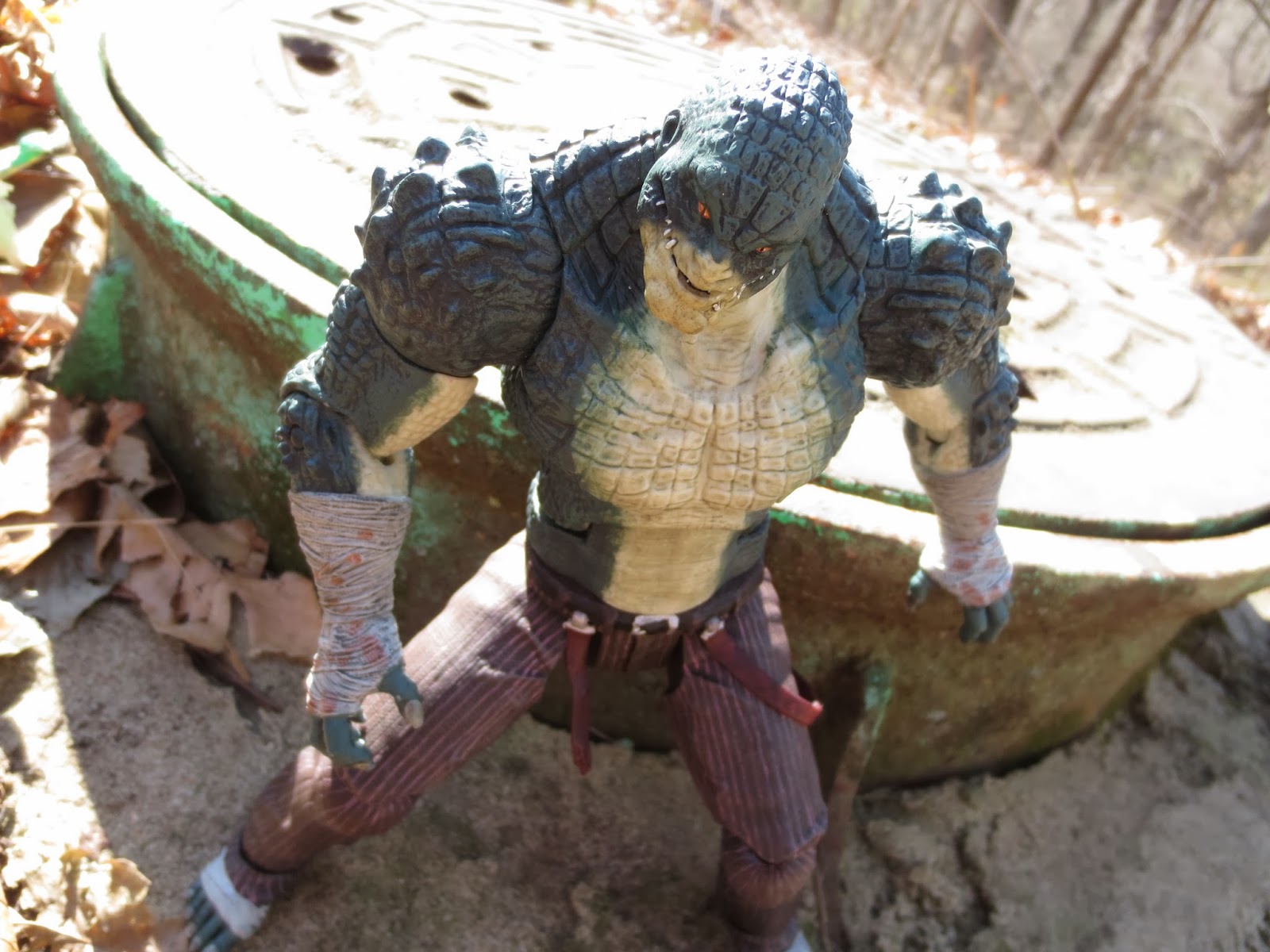 The DC Collectibles Killer Croc from Arkham Asylum was a beautiful figure, but it was notorious for breaking at the arms. I'm glad to report that this Killer Croc has no such issues. His joints are nice and sturdy with no brittle plastic in sight. He features the following points of articulation: swivel/ hinge ankles, swivel/hinge knees, H-hinged hips, a swivel waist, a hinged torso, swivel/hinge shoulders, swivel biceps, hinged elbows, swivel/ hinge wrists, and a ball-jointed head. Everything works great and you'll be surprised by the range of movement you can get from Croc. He's a little stiff at first but carefully work with him and you'll find his articulation well thought out and nicely implemented. 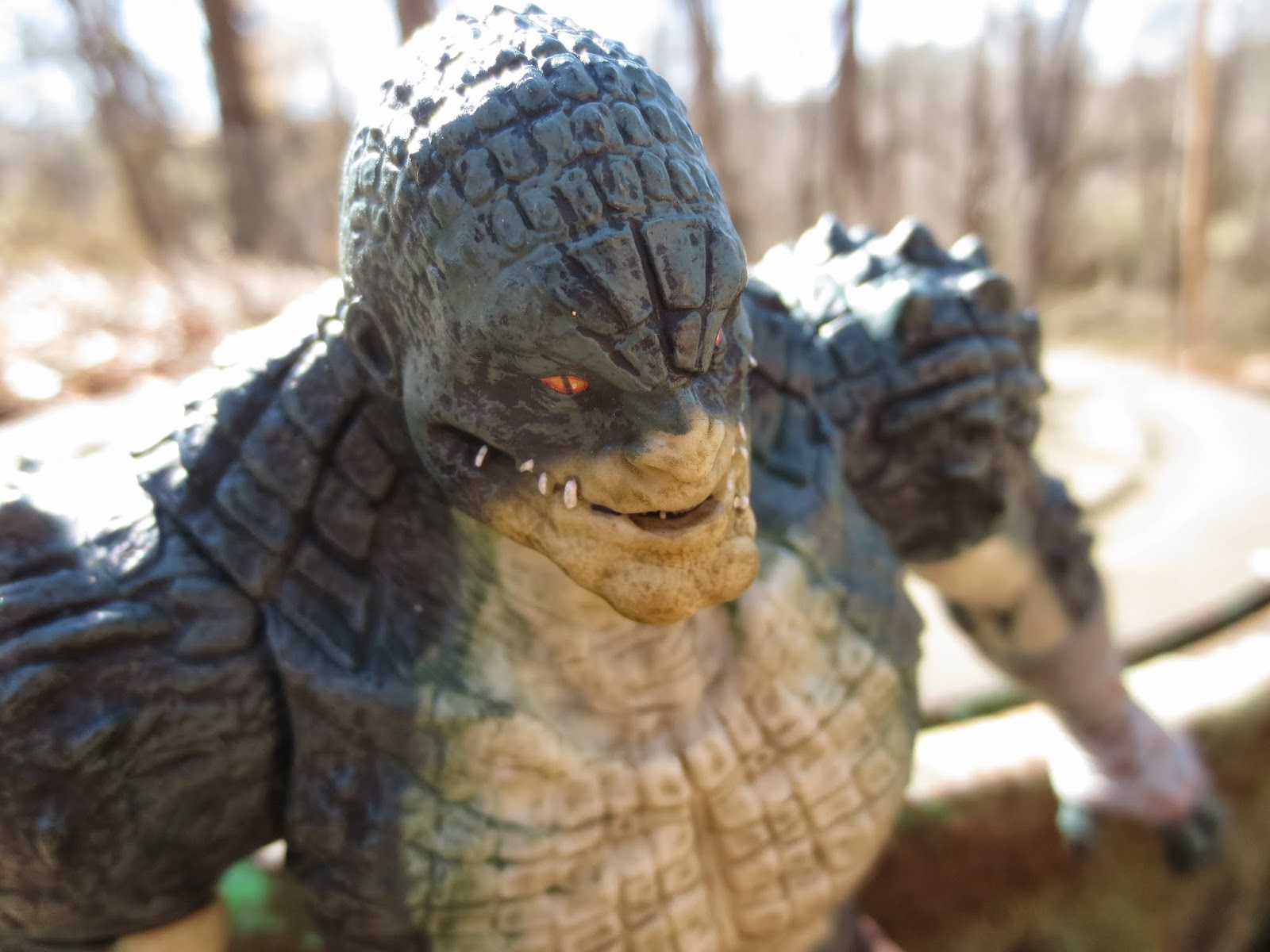 Killer Croc is really a figure that at first I wasn't completely sold on. For some reason, he looked rather flat and lifeless to me when I first got him out of the package. Don't get me wrong, he looks almost exactly like the in-game character (well, the forehead might be a bit to large) but he just didn't wow me. Then I took him outside and started posing him and phoographing him and found myself floored by how great this guy is. The scales, the creepy grin on his face, the bandages wrapped around his hands and feet; this guy is just amazingly well done. I'm going to let the pictures do most of the talking here, so just enjoy his menacing glory! 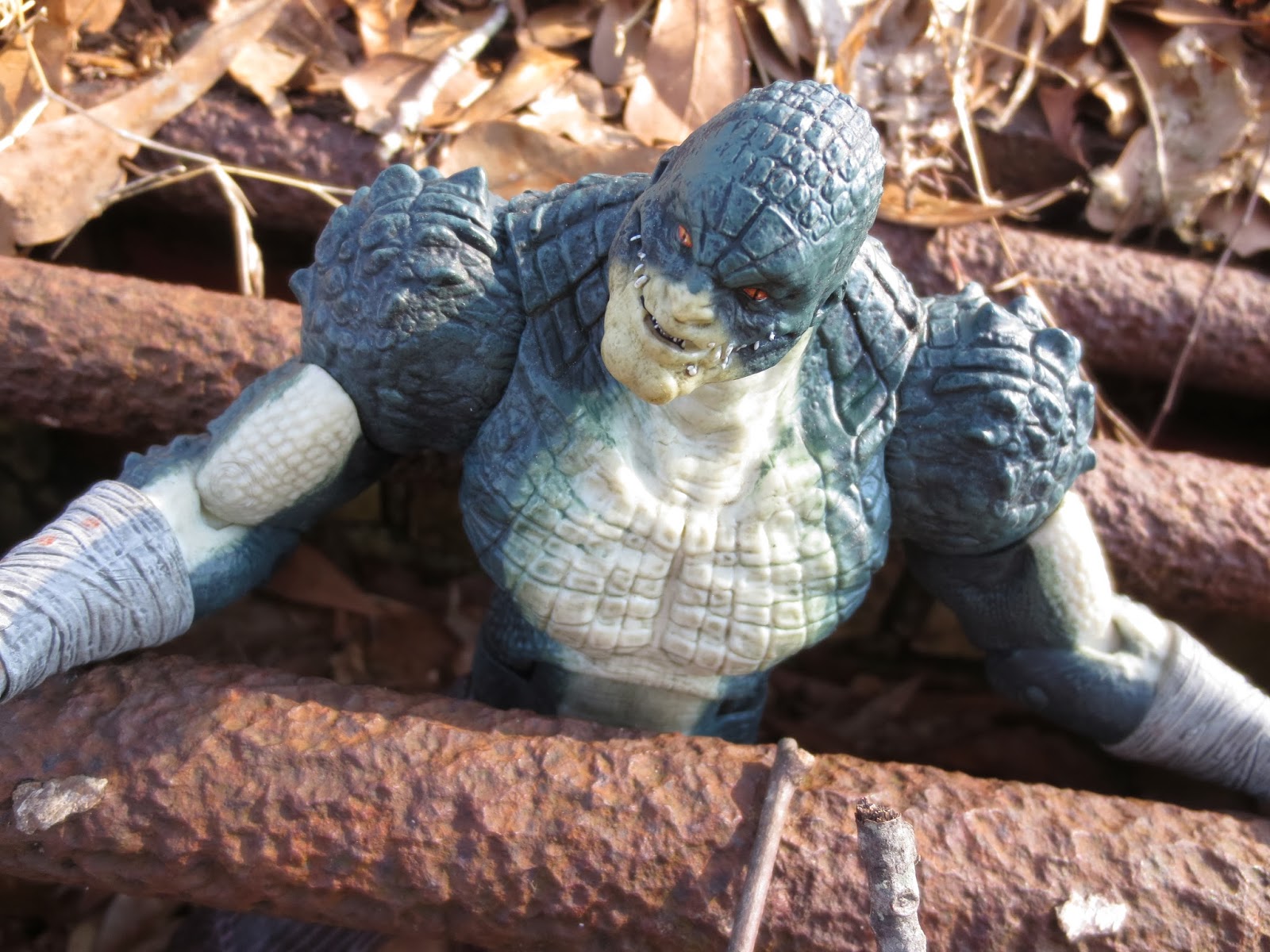 The paint just beautifully brings the excellent sculpt to life. The body is a mixture of dark greens with lighter green on the belly and arms. Everything is cleand and neat while still retaining the gritty, grimy Arkham-verse vibe. Croc looks like he shops at the same store as the Joker since has some wild purple pin-striped pants. I love the dangling suspenders which have some nice dry-brushing on them. The wraps on his arms look really good, too; they're even speckled with something reddish brown. It could be some nastiness from the sewer. It could also be blood. The blood sounds cooler, so I'll go with that. 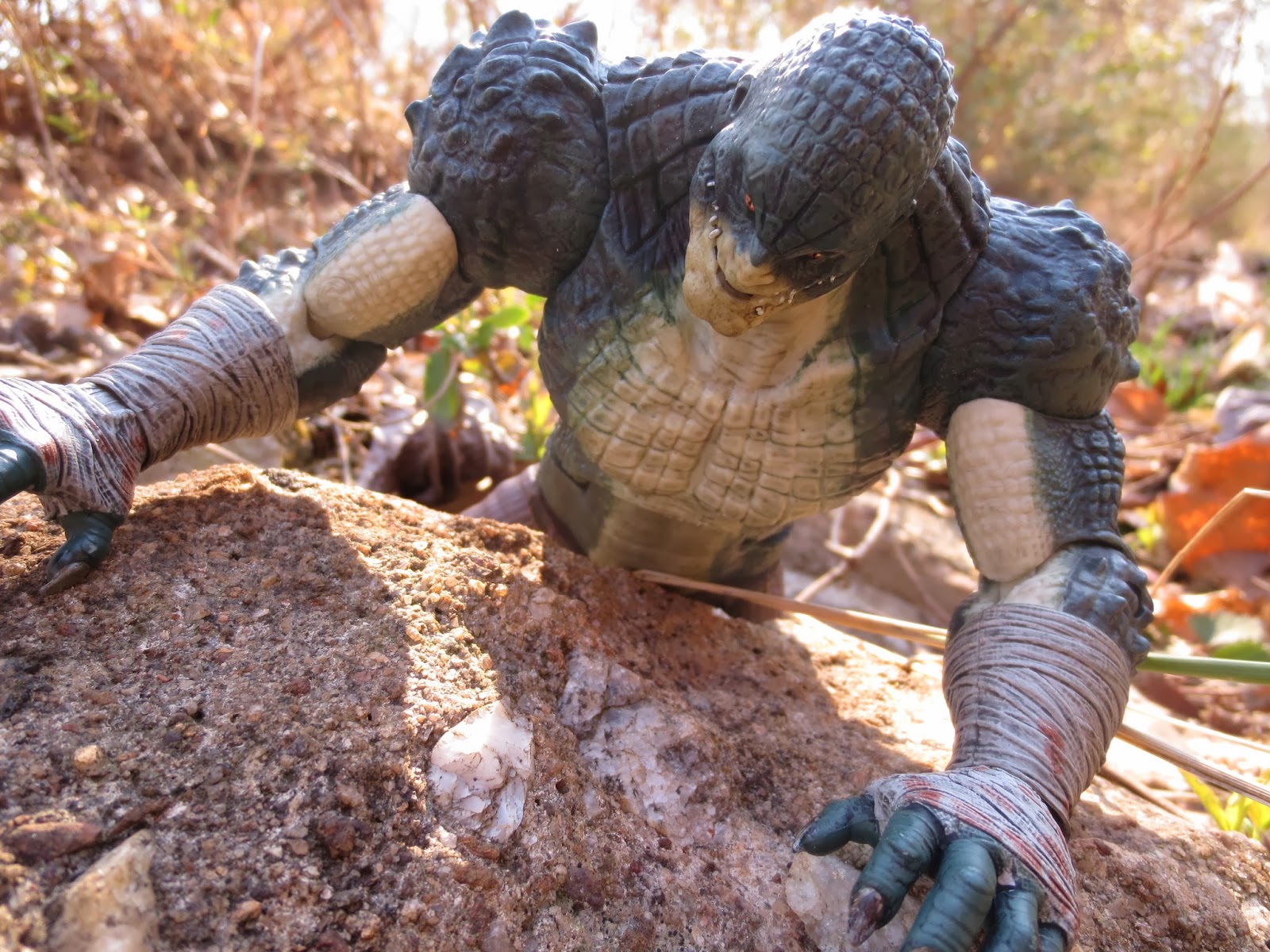 Croc doesn't come with any accessories, but considering how big he is I can't really blame DC Collectibles. This guy is so massive that you can tell that all the budget went into his size. 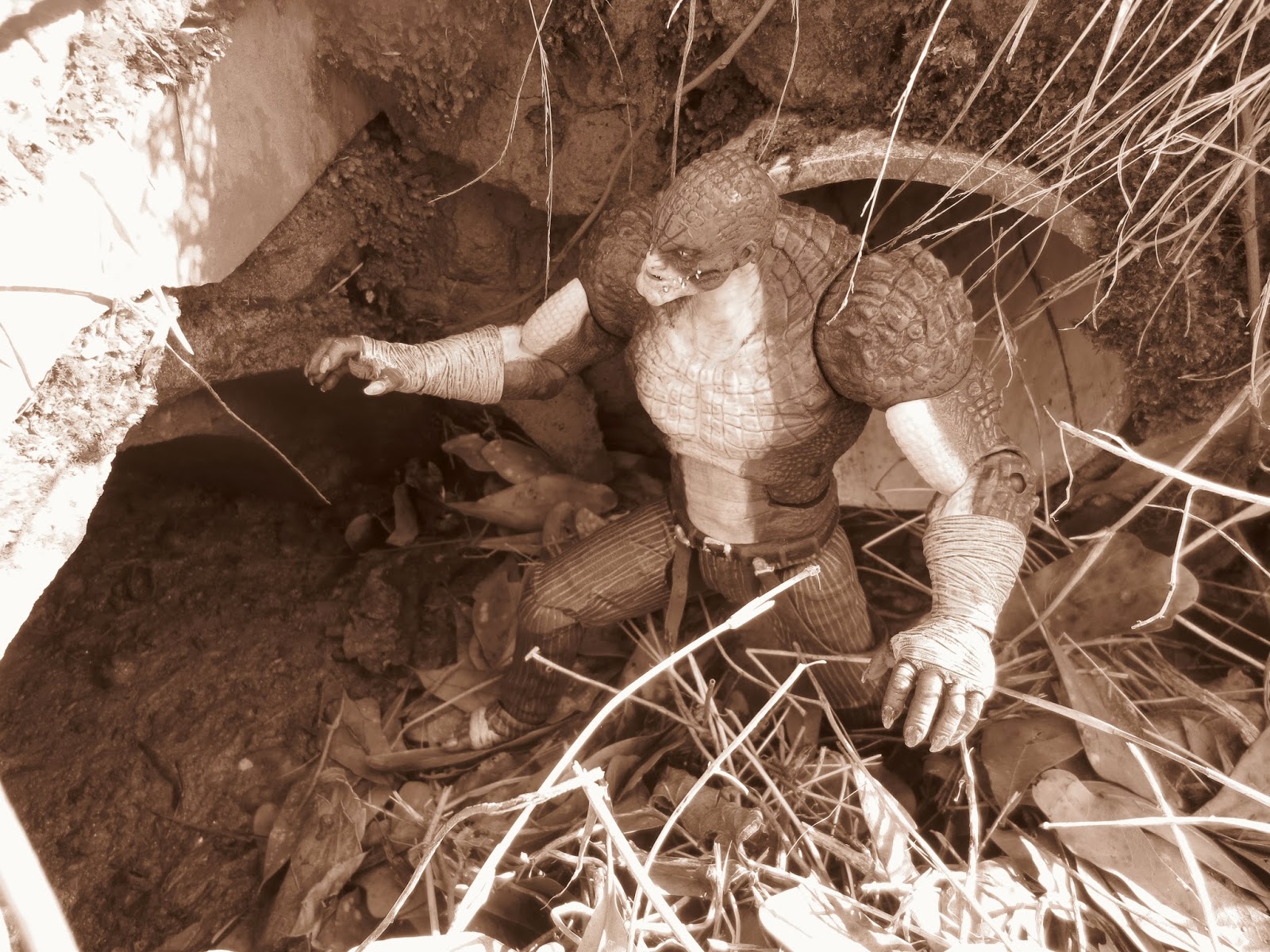 Action figure pricing is one of those crazy things that in all honesty, unless you're working in the industry and crunching the individual numbers I'm not sure anyone can wrap their minds around. I'm actually really impressed that DC Collectibles can sell this 10 inch, uniquely tooled figure for an MSRP of 24.99 (I paid less than that through Big Bad Toy Store). Are they using the old McFarlane tactic of taking a hit on a larger figure in a series to reward and impress customers while making their money back on the smaller guys? Who knows? All I know is that this guy is truly a marvel. Great sculpting and paintwork coupled with fun articulation on a huge figure just brings a smile to my face. I had a blast with this guy and I can't imagine any other Bat-fan not loving him either. Due to all the positive I mentioned, I have no problem giving this guy an Epic. He's just really well done and quite possibly the greatest Killer Croc figure ever made. Even though I prefer the more crocodile inspired Killer Crod (snout, tail, etc.) this guy still owns the rest of the Crocs out there. Great job, Waylon!
Posted by Barbecue17 at 11/25/2014