My First Zombie, A.K.A. The Zombie Monster from The Real Ghostbusters: Monsters by Kenner 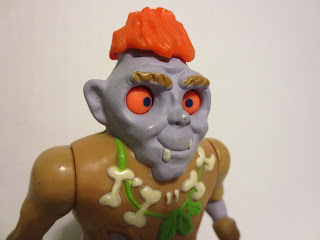 As some have celebrated and others have lamented, we live in a time when zombies are known to everyone and have become a dominant part of popular culture.  Anywhere I go, I can find books about zombies, zombie themed toys and video games, zombie candy and food, zombie clothes; you name a product and a zombie version of it can probably be purchased.  While younger readers might be shocked to learn it, older readers will most certainly remember that this was not always the case.  Today I'm looking at probably the only zombie toy I owned as a kid until Toy Biz's Resident Evil line was released in late 1998: The Zombie Monster from Kenner's The Real Ghostbusters Monsters sub-line.  While most of the ghosts from the toy line were wild, often silly monstrosities made up for the toy line, the Monsters were based off of more recognizable and classic movie monsters such as Dracula, Frankenstein, the Wolfman, the Hunchback, the Mummy, and of course, the Zombie.  More zombie goodness and cathartic thoughts after the break.... 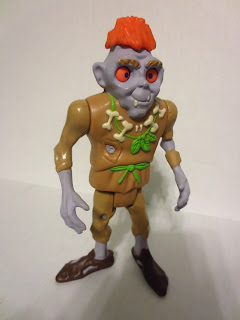 Receiving this figure was probably the first time I ever encountered a zombie.  I knew all about vampires, werewolves, Frankenstein's monster, and mummies, but the zombie was something new.  Frankly, he creeped me out as a kid.  Released in 1989, I probably obtained the Zombie when I was only five or six, and he shortly became the subject of a reoccurring nightmare I had for quite sometime.  When I was fairly young (still in kindergarten) we moved from outside of Cincinnati, Ohio to outside of Chicago, Illinois.  Our new house was larger and had a lower level that was built half underground (you could look out the windows from both the front and back of the house and be staring into a flower bed). This also meant that it had the problem of excess moisture and thus we had a room with a sump pump. I don't remember it too clearly, but it was a small room with a door that was right off of our family room.  Obviously, the sump pump made weird noises from time to time and eventually began to creep young Barbecue17 out.  Eventually, the nightmares came.  I would be sitting downstairs in the family room when the door would fly open, and standing there would be a zombie.  He had purplish skin, was fairly short (probably about my size), and would begin to walk slowly towards me. I remember feeling like I was entranced and unable to move as he crept closer and closer. Then I would wake up screaming.  If I remember correctly, this dream recurred for quite sometime.  I don't think it was until a few years ago when I snatched this guy up at a toy show that I ever realized that my nightmare zombie sure reminded me of this toy.  The only other zombies I think I ever knew of as a young kid were the zombie from Monster in my Pocket (but I only had the trading card set and not the actual figure), a zombie from a Mighty Max set, and the zombies that showed up in the 1989 Nintendo horror game Monster Party.
It would be quite a few years before I really ever encountered zombies again. Sure, I remember Billy the zombie from Hocus Pocus and the Zombie Jamboree from Fright Fest at Six Flags Great America, but my real second encounter with zombies came in 1997. It was a late night showing of the 1990 remake of Night of the Living Dead on the late night program MonsterVision with Joe Bob Briggs that a friend and I found, and we watched it both times that it aired that night.  I was in 7th grade and suddenly was nuts about zombies.  A trip to Blockbuster video over the next week netted a VHS copy of the original Night of the Living Dead, which I assume is the true gateway drug for most zombie fans.  It would still be another year until I first played Resident Evil,which sent my zombie fandom into full on addict mode, but I'll cover that experience later today. Let's get into looking at my first zombie, the Zombie Monster from The Real Ghostbusters. 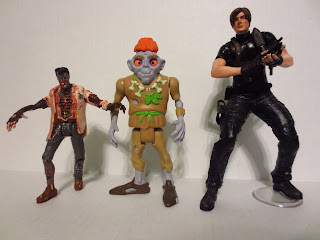 The Zombie stands right around 6 inches tall, so he's definitely a good bit taller than your average Real Ghostbusters figure.  Like most "ghosts" in the Real Ghostbusters line by Kenner, the Zombie is fairly animated looking, and also somewhat humorous.  He definitely fits in better with more animated toy lines than anything fairly realistic in the 6 inch scale. 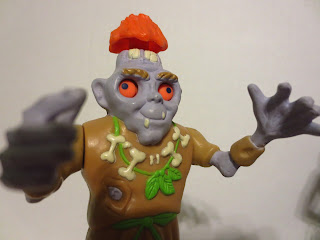 Due to his action feature, the Zombie doesn't even feature the Kenner five. He features swivel hips and swivel shoulders.  The hips can move independantly of each other, but the arms can't unless you apply some force (which I don't think I'd recommend).  They're part of the action feature and are designed to raise up (as if the Zombie is reaching out) when his left leg is squeezed in.  The figure's eyes also rotate outwards, and his tuft of orange hair lifts up a bit, revealing some of his exposed skull. It's a fun feature and, while definitely not what we expect with modern toys, it worked well in conjunction with the play mechanics of the Real Ghostbusters line. 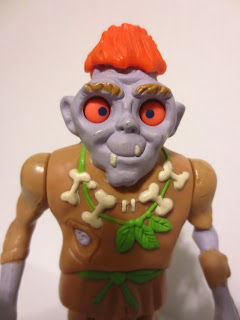 The sculpting features some fun details, especially considering this toy was released in the 1980s.  First, I have to say that I've always liked his stance.  While the left foot is posed fairly regularly, the right ankle is twisted at a 90 degree angle from where it should be, a nice allusion to how zombies are traditionally depicted as walking.  While the figure creeped me out as a kid, he does have a fairly friendly looking face.  The oddly shaped head, oversized googly eyes, and friendly smile with two snaggle-teeth make this seem more like a character who may have aided the Ghostbusters in some way than a villain who wanted to eat them. He's got some big eyebrows, too, and the messy tuft of hair on his head just adds to the silliness. There are definitely some details on the skin that show this guy isn't alive, such as various nicks, dents, and tears in the flesh that are exposed through holes in his brown tunic-styled outfit.  The outfit is pretty simple and looks like some basic handmade pants and an oversized shirt tied with a simple rope belt.  There are lots of rips in the suit, including part of the left sleeve that's completely detached form the rest of the outfit.  Around his neck he's wearing two necklaces--one carrying four bones and two teeth, and one carrying three mysterious leaves. He's definitely based on the Vodou idea of a zombie as a corpse magically reanimated by a bokor, as seen in films like the 1932 Bela Lugosi film White Zombie, and described in books like Wade Davis' The Serpent and the Rainbow, which was published in 1985 and became a Wes Craven horror film starring Bill Pullman in 1988. Was Kenner influenced by that book and the film it spawned? Perhaps! 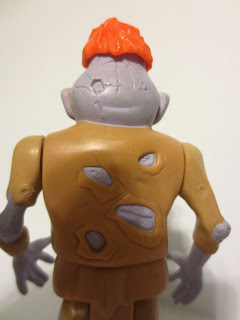 The paint is simple, but effective.  He's mostly molded in a tan plastic (the hair and eyes are bright orange) that serves as the color for his outfit.  The skin is painted a very pale purple. It's not overly grotesque, but it does enough to present this guy as dead.  There's lots of places where his skin shows through the tattered clothes, and these receive a paint app as well. The necklaces and their adornments are either a bone white or bright green, so there's definitely a bit of color to him. Everything looks like it was painted neatly when the figure was first produced, and has held up fairly well over almost 25 years.


The Zombie doesn't come with any accessories. No dice here. 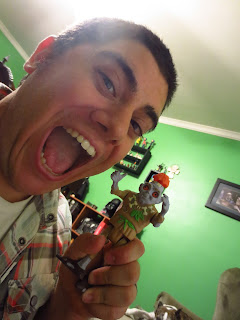 While I (stupidly) sold all of my Ghostbusters at a yard sale at some point during my childhood, the only one I've actively sought out to rebuy was this zombie because A.) I like zombies and 2.) Looking at him reminded me of the vivid nightmares I had as a kid. He's a decent, fun figure. He's not well articulated, but the sculpting and paint are fair and the action feature is fun. I'm not sure he works too terribly well with The Real Ghostbusters due to his size, but he'll look great nearly anywhere else.  I'd give him a Great. If you're looking for a zombie figure that hasn't been made recently, this might be one of your best options.