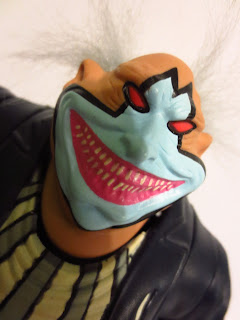 I've already said it in many other reviews, but I think it's impossible to overstate the influence McFarlane toys had in action figure history.  Like a more ultra-detailed Helen of Troy, McFarlane launched a thousand ships of other small companies who wanted to get into the action figure industry.  While Spawn.com lists the figures as being released in December of 1994, they really began to hit shelves in mass in 1995.  1995 was a year when Spawn toys were out proclaiming the birth of the Ultra Action Figure, Toy Biz was really starting to diversify and expand their Marvel offerings, and Kenner released Star Wars: The Power of the Force 2. Despite whatever age the package might have suggested, action figures were starting to not just be for kids anymore. Just take a look at the Clown here. He's an evil clown that can shape-shift into a demon. Not exactly standard kids fair, huh?  Let's take a closer look at another figure from Spawn series 1.... 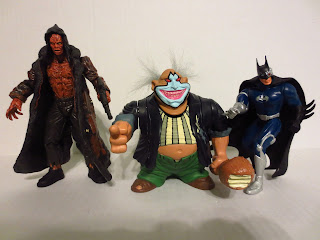 The Clown is right around 4 5/8 inches tall. It's tough to get a good sense of scale in the early Spawn figures since figures like Tremor and Overtkill are supposed to be massive, and the Clown is bulky but short.  I guess Spawn would be the basic 6 inch tall guy, but I don't have my childhood Spawn figure anymore.  While he has a more comic-bookish look to him than figures like Tremor and Overtkill (at least in my eyes), he still could fit in with other comic and cartoon based lines of the period. Actually, while he's the least articulated figure in the series, the sculpt is so good that he could fit in with more modern comic book based lines. I could see him looking decent next to some of the DC Direct Batman figures, if you wanted him to be a toady for the Joker. 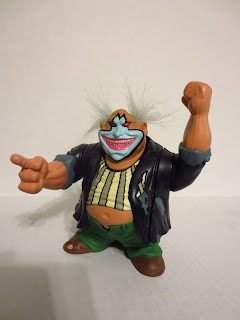 When it comes to articulation, well, Clown has little.  His arms swivel at the shoulder, but the right arm is actually part of his action feature.  Similar to the morphing Mighty Morphin Power Rangers, the Mask, and the Doctor Derange figure from James Bond Jr., Clown can change from one head to another. While you'd speculate this would impede the articulation of the right arm, you'd be wrong; the right arm is actually detachable so you can reposition it in the pose you choose with little effort. It's a decent action feature--it doesn't change too quickly, but it does give the figure two distinct looks. The Clown can stand just fine on his two (unarticulated feet).

I bragged on the sculpt earlier, and I will do so again. The sculpt on this figure is really nice. It's not overly detailed, like we'd see from McFarlane later on, but it's not as toyish as some of the other figures in the early line. It's very stylized and nicely matches the art of the comics, perhaps better than any of the other series 1 Spawn figures.  The figure's large and chunky, perfectly portraying the unrealistic proportions of the character.  While the figure does have the included action feature and minimal articulation, this perhaps helps to provide a sculpt that's largely unbroken. He's just standing--nothing too dynamic, except for the way this guy pops out of his pants (they're unbuttoned since it appears that's the only way they're going to fit), and his jacket has a few nice rips and tears, as well. The head sculpt is what always impresses me with this figure, though: It's really wicked. There's so much character in his face; those wicked little teeth, the multiple chins, the slightly uneven ears. He's a perfect corruption of the traditional without going overboard. To really finish the look, McFarlane chose to use tufts of hair (hopefully not real hair) to give the clown his weird little do.  The second head that shows him transforming into the Violator is also cool, but nowhere as awesome as the Clown. It looks like an evil cone head with a crazy laugh and a very veiny dome. 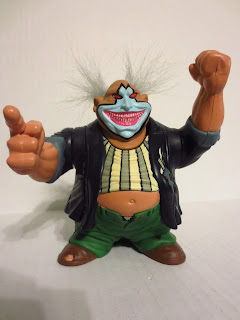 I think the sculpt here is greatly aided by some fantastic paint work.  The Clown probably has the best paint work of all the series 1 Spawn figures.  The face, even all of the little teeth, are neat and clean.  His shirt stripes look clean and neat themselves, although I speculate some paint from the jacket has bled over onto them.  The colors are bright and mimic 90's comic art coloring nicely. 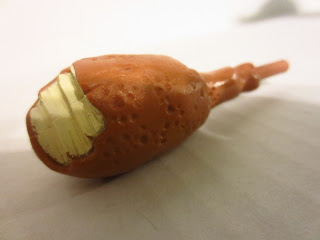 All of the first series of Spawn figures came with a comic book. It's a pretty decent book, especially for one included with an action figure, and was really a nice way to expose kids and collectors just buying these figures to the Spawn series, as I'm sure many folks had no clue who these guys were.  As far as traditional accessories go, the Clown comes with a giant turkey leg. Maybe he's been hanging out at the Renaissance Fair?  It's a solid plastic drumstick with a bite taken out of it. It fits pretty easily into his left hand and has a fried and battered texture to it.  The bite mark also has a paint app to look like meat. Definitely one of the most delicious accessories ever made. While I mentioned earlier that the arm is removable, I'm not really counting that as an accessory. 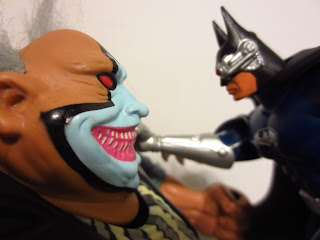 While I have some childhood nostalgia to the Clown figure, I will agree that he isn't the most exciting figure ever made. In fact, he's kind of dull without much of a purpose unless someone knows who the character is. I mean, did that many kids want a figure of a fat clown with a drumstick accessory?  I think some of McFarlane's figures were in a weird place: they understood that toys had articulation and action features, but wanted to also focus on the sculpting and the paint. With Clown, they were on their way to where they wanted to go, but hadn't gotten there yet. If you're going back and rebuying the Spawn figures, I'd give clown a good rating: if you're a completist or love the character of the Clown, snag this figure. While the sculpt and paint are strong, he's mostly going to just stand around gnawing on the turkey leg. 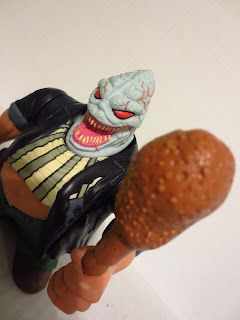