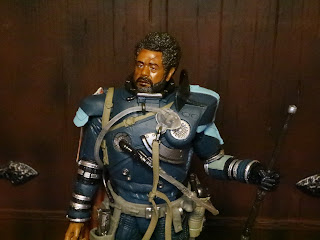 Since I'm using November to do some review miniseries, it's time to look back at another Star Wars: The Black Series action figure I received for my birthday way back in September but just haven't gotten around to reviewing yet: Saw Gerrera. Saw is the only Black Series figure I have sitting in my queue, so he's flying solo instead of being part of a miniseries. While it's been sometime since Hasbro has released any Sequel Trilogy based figures (other than repaints in the Christmas/ Holiday series) they have been slowly yet steadily getting around to Rogue One characters that were missed the first time and redoing the main cast with the photo-real face printing. After last year's release of Bodhi Rook, the next most anticipated figure from Rogue One had to be Saw Gerrera, right? Well, we got him this year (along with Galen Erso and Anton Merrick) Besides being pretty memorable in Rogue One (as played by Forest Whitaker), he's also a beloved Clone Wars character from a very memorable story arc and has continued to show up in shows like Rebels and Andor. Saw Gerrera has one of the most elaborate outfits of any Star Wars character that I can think of and, honestly, he does kind of feel more worthy of the "deluxe" treatment than so many of the other figures Hasbro has been releasing as deluxe releases. I've really been cutting back on my Black Series purchases due to the price hikes and the release of fewer characters I really want, but Saw Gerrera definitely made the cut. Let's take a look at Saw Gerrera after the break... 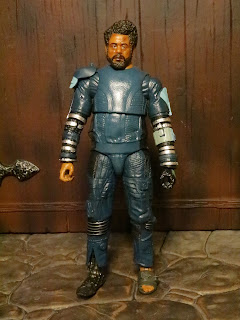 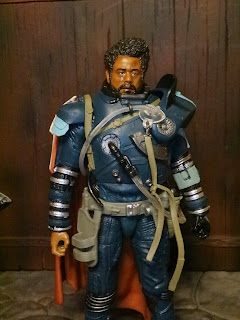 * Saw Gerrera is a sporting a ton of gear. After more than 20 years of fighting, he's showing his age and the toll that constant conflict has taken on him. He's gone full Col. Kurtz; Paranoid, unstable, and physically broken, Saw seems to be held together within a pressure suit outfitted with all kinds of life stabilizing gear. His right leg seems is cybernetic and, due to severe damage to his lungs, he's forced to carry a ventilator to aid him in breathing. He's kind of like a parallel of Darth Vader in so many ways, isn't he? I'm really not sure there's a more complex Black Series figure that has been released yet and the number of paint applications and separate pieces on Saw Gerrera's outfit is quite impressive. I would have liked more weathering but there aren't any clearly absent paint applications and the fact that so many pieces of the outfit are separate parts and removable is pretty impressed. 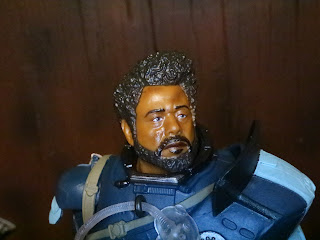 * The portrait is quite good. There's no doubt as to who this is and the Forest Whitaker is really strong. He looks very haggard and worn, which fits his character. You can almost hear him yelling about Bor Gullet. Just curious: Has anyone picked Saw up to use him for a custom Zuri from Black Panther yet? Just smooth the hair down. If Hasbro had included a young Saw portrait from Rogue One (where he's bald) that would have probably helped them sell way more units a some folks would want to and some would use that headsculpt for Zuri. 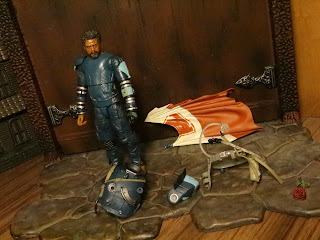 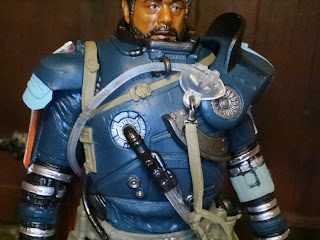 * The chest is covered with stuff. The plug for the ventilator air tube can unplug from his armor while the breathing mask can come up so he can hold it. Most of the various ports and greeblies are given paint applications, too, and everything does look pretty swell. 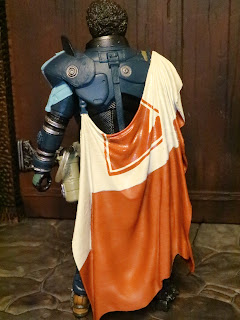 * Saw's cape is actually a banner from his homeworld, Onderon. It's a removable piece made from a somewhat flexible plastic and there's a nice print on the back. It's a cool detail showing Saw's attachment to his homeworld, even as it's fallen under Imperial control. 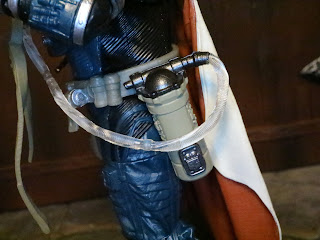 * The ventilator on his left hip isn't removable but it is a cool and well detailed piece. The breathing tube and various wires running from the portable ventilator to his armor do have some sculpted wires on them that should be painted a bit more (black and yellow) but they've been left unpainted here. 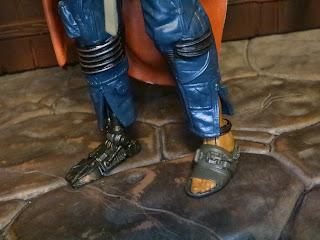 * Saw's right leg is cybernetic so he's not wearing anything to cover it. Since he's just chilling out at the Partisan base on Jedha, he's wearing some comfortable space sandals. 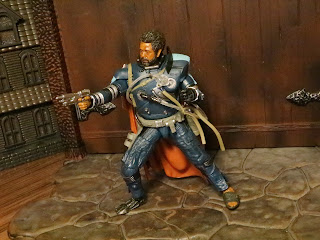 * Despite having lots of bulky armor on him, Saw's articulation is fantastic. Yeah, the movement of the chest joints and such are restricted a bit but everything else moves fine and has a great range of motion. He's a completely unique sculpt with all pinless joints and a solid build. Can't ask for much more can that, can you? 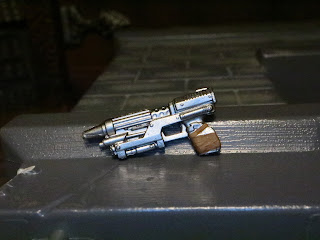 * I'm not exactly sure what model of blaster Saw Gerrera is packing but it definitely is a pretty cool design. Great detail with a nice wrap on the handle, too. It looks fantastic. 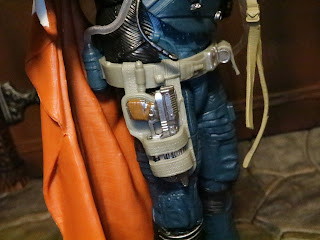 * It also fits perfectly in the holster on Saw's belt. 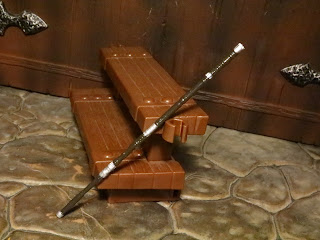 * Saw's second actual accessory is his walking stick. According to the Rogue One Visual Dictionary, it's carved from dxunwood. Maybe that's a type of tree from Dxun, one of the moons of Onderon? The sculpt is strong and there are some silver paint applications to show off the metal bits of the staff.

* I really only have one negative, and that's the fact that Saw Gerrera's hair doesn't have any grey in it. That's a huge part of the character's look and it seems like Hasbro just missed it. I can understand them not painting little wires or stuff here and there but when the man has hair that is very clearly graying, give it to him. He's earned it! 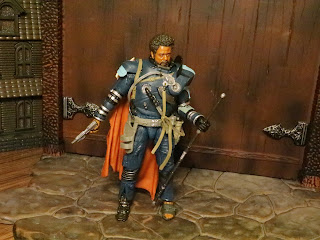 Saw Gerrera is an impressive figure. Most impressive, really. As I said earlier, he really might be the most complex figure in the Black Series to date. His costume is made from multiple separate pieces, nothing is symmetrical, and there are so many different elements that can't just be sculpted on, such as the breathing mask or the ventilator tube. There are some missing paint applications till, even though he's a deluxe figure, but the only one I consider really worth complaining about is the lack of grey in his hair. Considering he's a deluxe figure at a higher price point, not getting that right definitely seems off. It also would have been nice to have received a younger head for Saw from when he rescues Jyn Erso. Overall, though, I'm quite happy with how he turned out. He's a impressive figure worthy of a Great rating.