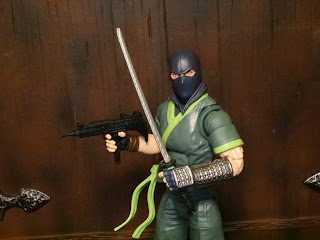 My G.I. Joe: Classified Series review miniseries continues with a look at another new figure: Kamakura! Kamakura didn't have an action figure in the vintage G.I. Joe: A Real American Hero line as his only appearances during the 1980s and 1990s were as a kid in the Marvel comics. Kamakura's real name is Sean and he's the biological son of Fred Broca, the original Cobra Crimson Guardsman. After his death, Fred Broca, was replaced by an identical Crimson Guardsman, Fred II, who stepped into the family. Fred II was actually Wade Collins, an old army buddy of Snake Eyes, Storm Shadow, and Stalker. Fred II/ Wade got out of Cobra and raised Sean as his own. During the Devil's Due G.I. Joe relaunch of comics Sean Collins was reintroduced as Kamakura, an apprentice of Snake Eyes and a new ninja for the Joe team. Kamakura has received a number of figures since his 2003 action figure debut, many from the Sigma 6 line where he was a major part of the team. I'm glad to see Hasbro pulling from multiple eras of G.I. Joe in the Classified Series and Kamakura is a great choice. He's an Amazon exclusive (who's currently not even listed on the site) and, oddly, a deluxe release. Why is he deluxe? Well, he does have two portraits, but it's probably because of the extra weapons Hasbro included with him. They're not unique, though, and he doesn't have storage for most of them (holsters, sheathes, etc.), so it feels like he just has a bunch of extra stuff. Is he worth tracking down? Let's find out after the break... 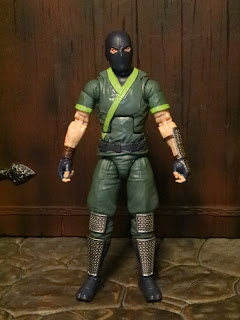 * Kamakura comes in the new plastic free packaging, so you can't see the figure or accessories until you open the box and all of the included paper bags. The package art is cool, if not a little silly and not quite reflective of what is actually in the packaging. There's also a cardboard weapons crate included. They're handy, but they're just thin cardboard, though Kamakura's name and figure number are printed on the box. 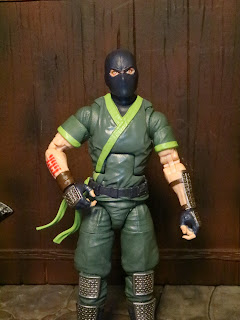 * Kamakura really seems to be based on his original 2003 figure from the Spy Troops line. He shares a lot of parts with Storm Shadow, but there's plenty of new stuff here as well. Honestly, he feels pretty unique in hand. Probably due to the shades of green on his outfit and the unique armored greaves and bracer. The sculpt is excellent and the figure walks a nice line between ninja and commando, taking after his master Snake Eyes. 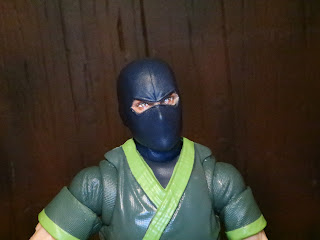 * Kamakura's wearing a hood that seems to go down underneath his outfit. It's a unique portrait and you can see all of the details of his facial features underneath the material. There's great paintwork and detail on his visible eyes, too. He's pretty intense and focused looking. If you were to be trained by Snake Eyes I imagine you'd have to be a pretty driven individual. 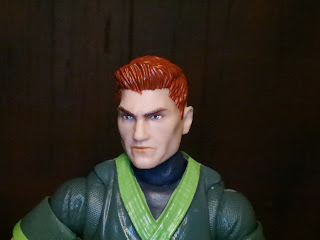 * Kamakura also comes with an unmasked portrait, something we haven't seen on any other figures in this line. It looks quite close to how Kamakura was portrayed in the comics and it's a solid sculpt, though I do wonder why Kamakura was considered to warrant an unmasked head when other previous releases like Beach Head and Barbecue didn't include one. 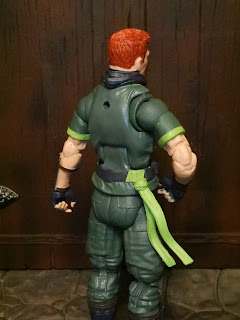 * Since Kamakura's torso and belt piece are reused from Storm Shadow, he has the same tassels on his belt. It's a separate piece which attaches to a peg so you can move the tassels around. If you want them flowing out dramatically to the side when he's in an action pose, you can do that. he also has the same "collar" that represents his hood worn down. It's fully removable in case you want him to remain hoodless, too. 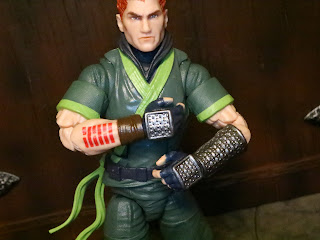 * Kamakura is sporting some rather unique armored bracers on the back of his gloves and on his left forearm. The sculpt is really unique with an interesting texture on the metal pieces. Since he's part of the Arashikage clan, he's also sporting the iconic tattoo. 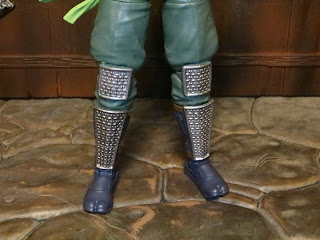 * Kamakura's unique armor also protects his shins and his knees. Flip him around and you can see the straps sculpted on to show these plates "attached" over his pants. 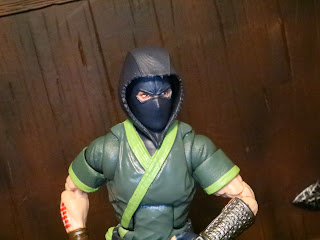 * The separate hood fits over his either the masked or unmasked head fairly easily. Just pop off Sean's head, stick the head inside the hood, and push down. It works quite well and does allow for some more variety when displaying Kamakura. 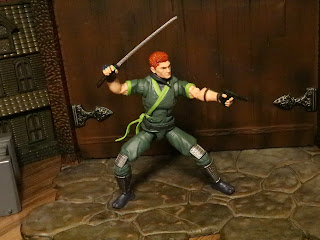 * Kamakura is really well articulated, just like the rest of the figures in this line. He's posable, durable, and has a great range of motion in his joints. He's also largely unencumbered by anything that would impede his movement, so he poses easily. 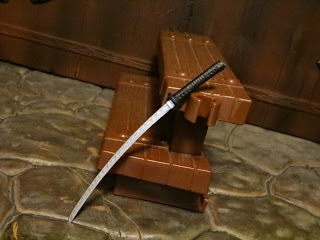 * I never picked up the Storm Shadow figure from the Snake Eyes movie as I just wasn't impressed with him (his outfit looked too yellow), so I can't be 100% sure but I do believe that Kamakura comes with his swords. This sword is more curved and has an interesting design sculpted as part of the blade; kind of a zig zag pattern. 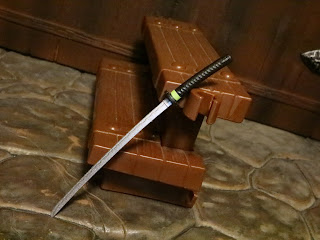 * I believe the second sword is also from the movie version of Storm Shadow. It's also a perfectly fine sword, straighter than the other sword and with a green stripe on the hilt that matches Kamakura's outfit highlights. 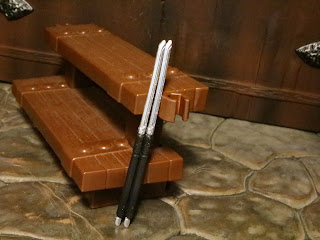 * It seems like Hasbro has been determined to reuse the accessories from the movie based figures and the next bit of gear included with Kamakura is from Akiko. These are two bladed weapons (they're identical) with a smaller blade at the base. I did pick up Akiko a few months ago on a GameStop clearance but I never reviewed her. These are kind of cool and are actually meant to be the separated halves of a bladed staff. 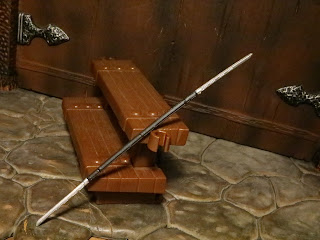 * The halves of the weapon don't truly attach. Instead, an additional bladed staff is included which shows both ends of the weapon together. It's a solid ninja weapon and adds another tool to Kamakura's repertoire. 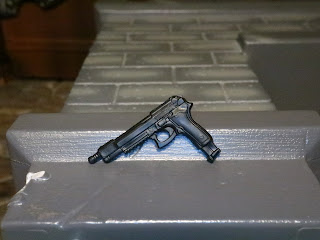 * Kamakura also comes with three of the weapons from the original Snake Eyes release ("00"). First up is this pistol, which was also included in the Alpha Commandos set. While the suppressor isn't included with Kamakura, this pistol still has an extended magazine and a modified barrel. 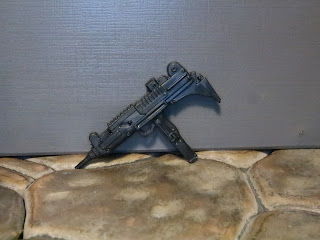 * The Uzi is reused from the original Snake Eyes as well. It was a commonly included accessory with the 1/18th scaled Kamakura figures so it makes sense to see it here, too. 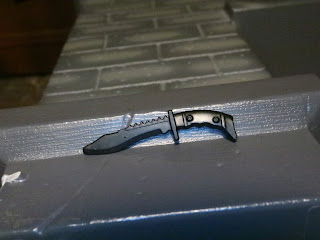 * Last up is the knife included with the first two versions of Snake Eyes. It's still a solid accessory and makes for another piece that seems to skew towards Kamakura's commando side. 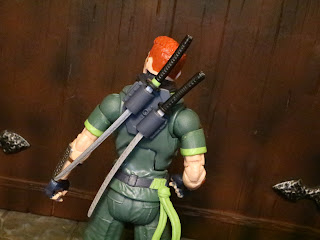 * This weird backpack sheathe kind of fits the figure awkwardly and it just looks weird. The blades are simply exposed at different angles. This is another piece reused from the movie version of Storm Shadow but it's a disappointing accessory with very little coo factor. 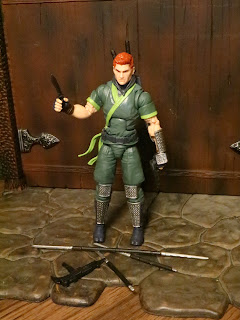 * Besides the sheathe/ backpack, Kamakura doesn't have anywhere to store his weapons. I'm fine with figures coming with more weapons than they can carry but why not include a holster for the pistol or a sheathe? It's a decision that makes the figure feel kind of half-baked despite the thought and care put into the new parts of Kamakura and his two portraits. 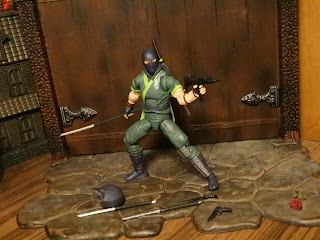 Kamakura actually is a pretty solid figure. There's really not that much reuse on the figure itself and the new elements and portraits are really well done. He just looks very, very cool. He does have a lot of accessories though all of them are reused and there aren't many places to put them since he's lacking a holster and sheathe. Does Kamakura feel like a deluxe release? Not really. Still, he is a Great 1/2 figure and I'm glad to have him. I can't say he's worth the new price but he is quite well done. Some storage and a few unique accessories would have sent him over the top for sure.


This is the first figure of Kamakura/ Sean Collins I've reviewed on the site. For more G.I. Joe Classified Series reviews check out the following: