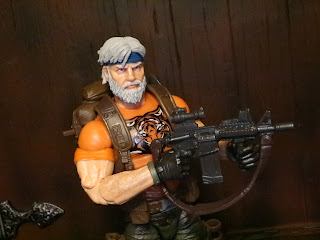 For the last figure in my G.I. Joe Classified Series miniseries I've got another extremely new release: The Target exclusive Tiger Force Stuart "Outback" Selkirk. It's interesting that we're getting the variant version of Outback before the standard version, but since Target is now focusing on a Tiger Force/ Python Patrol theme it makes sense. Outback is probably recognizable to most G.I. Joe A Real American Hero fans as a red headed, white t-shirt wearing, Chuck Norris looking guy, but this version is based off of the Tiger Force version of Outback that wasn't released in the US but in Europe and Brazil. Tiger Force Outback was released in Europe in 1991 and then in Brazil in 1993 as Forasteiro. He definitely developed a bit of a cult following due to his kind of silly tiger T-shirt, and ended up getting a modern release in the fourth series of the G.I. Joe Collector's Club Figure Subscription Service. Now he's in the Classified Series and, in my opinion, he's never looked better. Let's take a look at the Tiger Force version of Stuard "Outback" Selkirk after the break... 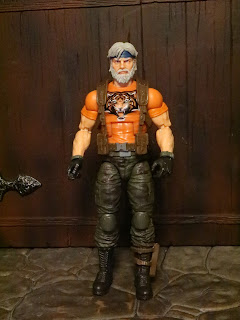 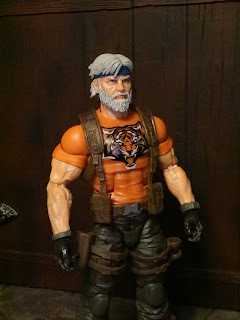 * Outback looks awesome here, particularly because Hasbro redesigned the Tiger Force logo on his shirt to look more fearsome. It's a great redesign and definitely improves the figure. I'm loving the color scheme here; a bit of orange, a bit of green, and a bit of brown. It does the job and looks pretty amazing. Outback's web gear is a separate piece though it's not removable unless you somehow disassembled the figure. It's really detailed with lots of the little tabs and straps you'd find on the actual thing. The camouflage pants are also well done. 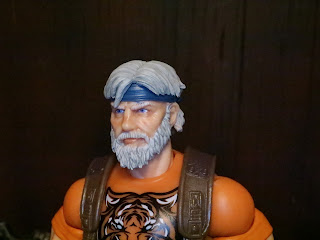 * I really think that Hasbro's best headsculpts are coming from the Classified Series and I'd wager that Outback's portrait is one of the top five. They really just keep getting better and better, don't they? While it will drive me crazy as to why Outback has whitish-gray hair here versus red hair in his standard look, I can't complain because he looks so freaking awesome. He's grizzled, haggard, and just looks like a tough dude. He kind of reminds me of Kris Kristofferson. If any company has out a cooler portrait of a regular dude this year, I'd love to see it. 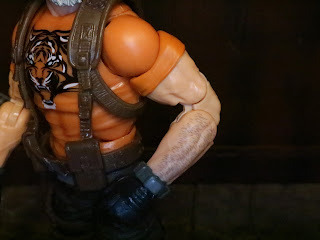 * Guess what else Outback has got? Hairy arms. That's pretty manly, right? Outback definitely needs them, especially considering his tendency to  wear a t-shirt in situations where it's really not appropriate. 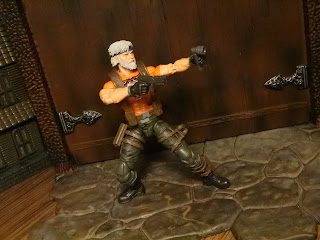 * There aren't any surprises here articulation wise, but that's a good thing. The articulation in the Classified Series is consistently excellent with sturdy construction and joints with a great range of motion. With all of the accessories this guy comes with you'll have lots of fun posing him utilizing them in a variety of ways. 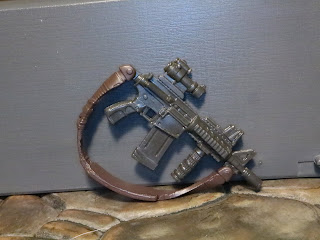 * Outback's primary weapon look to be a carbine of some kind, maybe based on an M4A1 or something similar? There's no stock but there is a vertical forward grip, a scope, and a sling for toting the rifle around. The sling gets a brown paint application as well, so it stands out nicely from the rifle. It's a nice modernization of the vintage Outback's rifle. 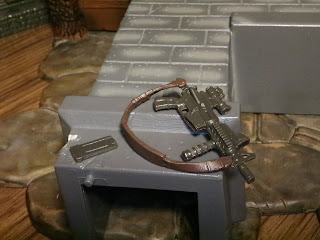 * Like most of the weapons in the Classified Series this year, Outback's rifle has a removable magazine. It doesn't fit a tightly as the magazines on most of the other rifles but it still stays in place and provides a nice feature for the gun. 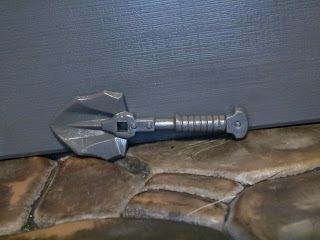 * Outback comes with a shovel/ entrenching tool that actually looks like one of those survival multi-tools. It's probably capable of all kinds of tasks, including use as a self-defense tool if the need arises. 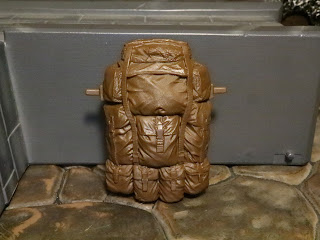 * Outback has always carried a huge backpack filled with gear and that's what he gets hear. It's big, bulky, covered in pouches and pockets, and it has a really long peg to keep it securely on the figures back. 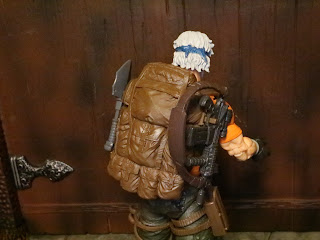 * There are two pegs on the sides which allow you to hang the entrenching tool and the rifle from them. The peg fits through the hole on the shovel and through the trigger guard on the rifle. 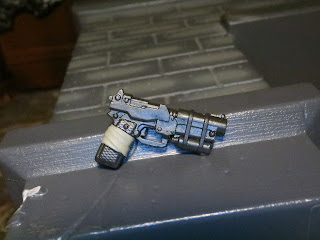 * I'm loving Outback's pistol, though I'm not exactly sure what type of pistol it is. It looks like it's maybe been customized, perhaps based on an older model? The barrel is unique and very round with a flashlight mounted on the bottom. There's also a strip of cloth around the handle. Maybe it's to improve grip or maybe just to make the gun easier to find if he accidentally drops it in the foliage? It's a fantastic looking accessory and fits perfectly with the character. The barrel is also hollow, so you can place firing effects in it. 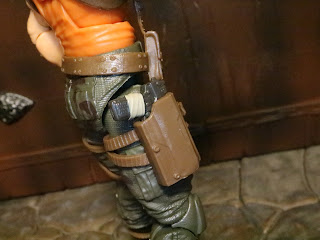 * There is a removable holster on Outback's right hip that keeps his pistol close at hand and safe during long treks through the jungle. 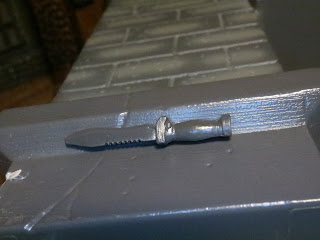 * Outback just has to have a knife with him too, right? It' a simple grey knife without too many features. Just a sharp piece of metal for use out in the jungle. 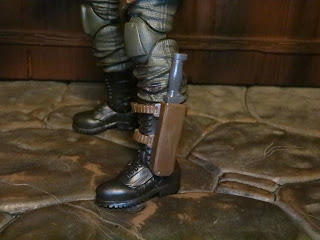 * The knife can be easily stored on this sheathe wrapped around Outback's left boot. It's not removable (it's very tight) but it is a separate piece. 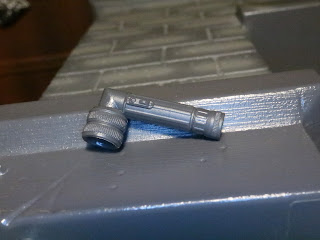 * Last up is this really cool flashlight. It's a standard military flashlight with the lens positioned at a right angle. A splash of red paint on the lens would have been awesome but I love this little accessory. I lost the flashlight from my vintage Outback as a child (it was probably eaten by some 1980s carpet) so I'm keeping a careful eye on this one. 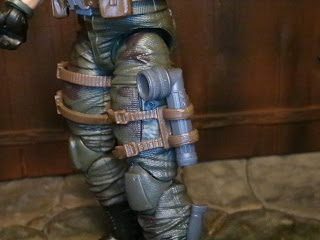 * Rather than just plugging into a hole on Outback's leg, the Classified Series has a sheathe for the flashlight to slide into. It's a removable piece that holds it firmly in place thanks to two straps. 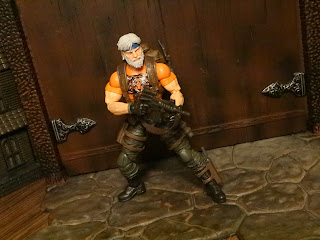 Every time I think the Classified Series can't get any better Hasbro releases a new masterpiece. Outback is an incredibly cool figure and is definitely one of the highlights of the line. He has one of the best portraits in the line overall, lots of cool accessories, an excellent color scheme, and a cool Tiger Force t-shirt. What's not to love here? He's a grizzled veteran who's keeping up the fight against Cobra.. He's also an Epic figure. This guy is easily one of the standouts of the year in this line. Don't miss him. He's worth hunting down.