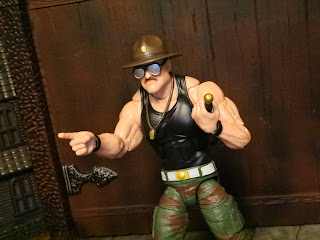 Sgt. Slaughter's appearance as the spokesman for the G.I. Joe brand was a pretty big deal in the 1980s. During that era Sgt. Slaughter was one of the most recognizable wrestlers in the world and his gimmick of a tough as nails drill Marine Corps drill instructor fit in perfectly with G.I. Joe. I'm not going to say I was shocked when Hasbro revealed a Classified Series Sgt. Slaughter but I was a bit surprised, especially coming so closely after the Valaverse Action Force Sgt. Slaughter figures. I tend to feel the two lines complement each other, but when you hop on social media or various forums you'll find there is often a pretty harsh rivalry between the two brands. The release of the Classified Series Sgt. Slaughter definitely really is causing some debate. While both based on Sgt. Slaughter, the two figures are fairly different with the Action Force figure representing a contemporary version of the Sarge and the Classified Series figure representing Sarge in his prime as part of the Joe team. I believe this figure is a Fan Channel exclusive, so look for it from select e-tailers and places like GameStop. Let's take a look and see if Hasbro's Sgt. Slaughter outworks the Action Force Sgt. Slaughter... 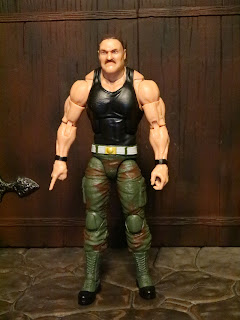 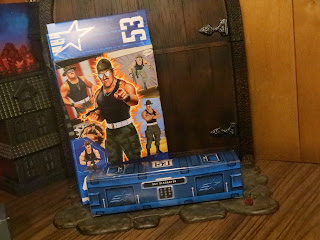 * Sgt. Slaughter comes in the new plastic free packaging, so you can't see the figure or accessories until you open the box and all of the included paper bags. The package art might actually be the best I've seen in the plastic free range as it shows multiple appearances of Slaughter over the years. I actually like it quite a bit. There's also a cardboard weapons crate included. They're handy, but they're just thin cardboard with Sgt. Slaughter's name and figure number printed on the box. 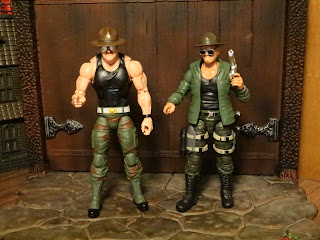 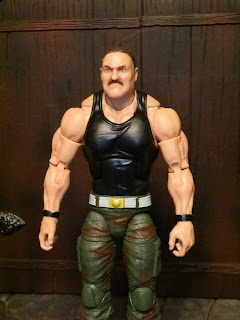 * Sgt. Slaughter has a pretty basic costume and Hasbro didn't really do any redesigning of his look. Usually I like redesigns for this line but Sgt. Slaughter is a bit different and going straight up classic and recognizable was the right move. He's sporting a black tanktop, camo pants, and a snazzy white belt. He's pretty muscular and looks imposing, which seems to match his character in the comics, the movie, and the in-ring performance of Robert Remus. It's a bit idealized/ stylized, but it works well for the Classified Series. 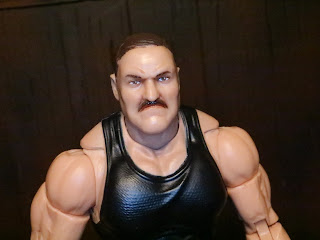 * The biggest improvement of Hasbro's Slaughter over Valaverse's is the portrait. This is an excellent looking classic Sgt. Slaughter portrait from his prime, which coincided with the time he was affiliated with the G.I. Joe brand. The sour look on his face and the raised eyebrows works perfectly and he isn't overly caricatured. He looks like a tough customer and fits in perfectly with the rest of the line. 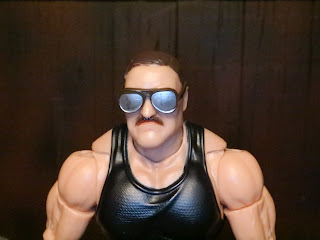 * The "mirrored" sunglasses not only look fantastic but they fit on the figure really well, too. Like a glove. They stay on and in place way better than so many other glasses I've seen in this scale. 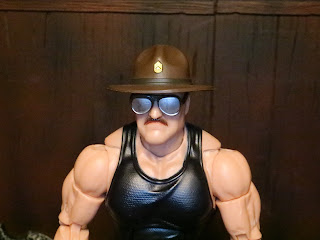 * And the campaign hat? It fits perfectly, too. It's a bit rubbery so it clings to the head just right and looks fantastic on Sgt. Slaughter. Hasbro really engineered the accessories well here so that they don't fall off. That was one of my disappointments with Valaverse's Slaughter, so it's nice to see it wasn't repeated here. 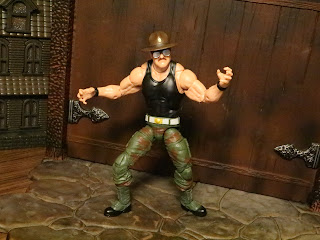 * Slaughter's a big dude but he sure can move. The articulation is excellent with a fantastic range of motion. If you're familiar with the Classified Series it's probably not a huge surprise, but Hasbro continues to impress. 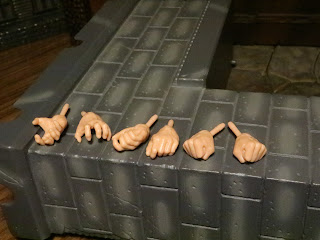 * Only a few figures in the Classified Series have came with additional hands (the Cobra Commander variants, the "00" Snake Eyes, and the new Snake Eyes and Timber set), so Sgt. Slaughter definitely is ahead of everyone else here. He overall comes with eight hands. To the left you can see six of them: A pair of grappling hands for wrestling, a pair of trigger hands for shooting, and a pair of fists for punching Cobra's lights out. What's the final pair? 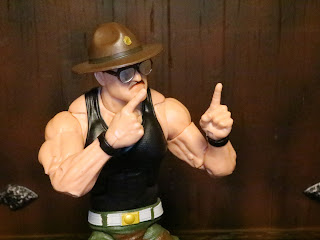 * Pointing fingers! Yes, you can have him point out all of the flaws in your other figures with these two awesome pointing hands. Or he can show you how big the fish he caught is. Your choice, maggot. 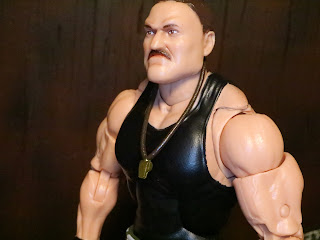 * Sgt. Slaughter comes with a whistle, too. It was a common part of the character's appearance and here it is. It's small but it's a pretty decent sculpt. 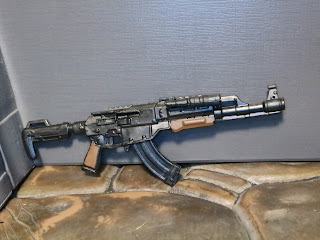 * Next up is an AK styled rifle. It's a great sculpt (it's the same piece that came with the Cobra Officer) though at first I did find it a bit odd that Sgt. Slaughter came with a very "non-American" weapon. I'm wondering if the intention was that he "liberated" this from a Cobra solider and is now using it to fight for freedom. 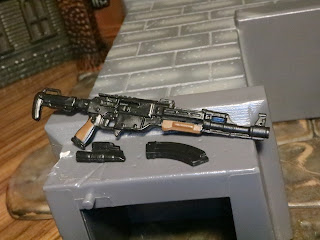 * This weapon also has a removable magazine and target designator. 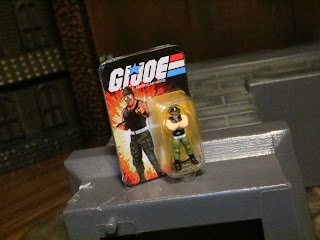 * Since Sgt. Slaughter was the pitchman for the G.I. Joe: A Real American Hero action figures, Hasbro included a packaged miniature action figure for him. The package looks like a classic ARAH figure and features a removable cardboard backer card, a plastic blister, and a tray to hold the Sarge. 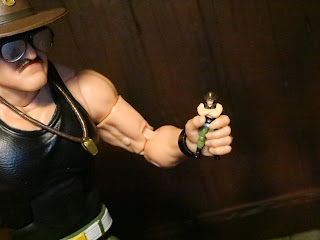 * The little mini Sgt. Slaughter is pretty cool. No articulation or anything but he's painted up real nice and shows off the Sarge crossing his arms and looking tough. 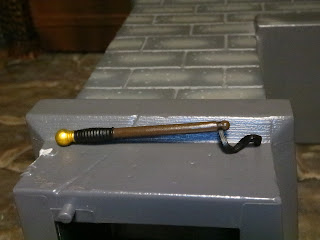 * Last up is a baton, an accessory that came with most of the vintage Sgt. Slaughter figures and which the real Sgt. Slaughter often carried to the ring and used in plenty of press photos. It's a nice accessory with a few paint applications on it. 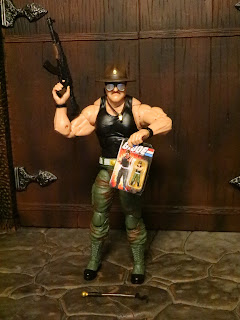 I'm really happy with how Sgt. Slaughter turned out. He's big, tough, and comes with some really cool accessories. The headsculpt is fantastic and the way his glasses and Smokey the Bear hat stay on him is excellent. I'm also a fan of the additional hands. What I'm not a fan of is him being sold as a deluxe figure. Why? Additional licensing right? Because he has six extra hands? The Classified Series is my current favorite action figure line but it feels like Hasbro has gotten a little crazy with their pricing. Sgt. Slaughter still comes with a nice complement of stuff, but definitely not anywhere near what feels like deserving of the "deluxe" moniker and pricing. He's a Fan Channel exclusive, so the odds of finding a deal on him are less likely. He's still a Great and a 1/2 figure, though, and I imagine the price won't keep most Joe diehards from picking him up. He really is fun to mess around with and looks great with the rest of the Classified Series Joe team.
For more of Sgt. Slaughter check out my reviews of the Action Force Sgt. Slaughter, Mattel's WWE Elite Collection Hall of Fame Sargent Slaughter (and yes, that's really how the package spelled it) and the M.U.S.C.L.E. Sgt. Slaughter from Super7.