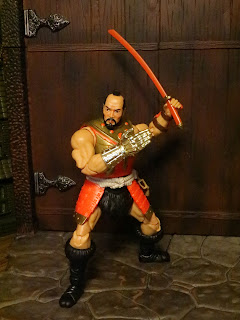 For me, the New Eternia subset has been the most exciting of the Masterverse subsets because it's definitely doing some unique things with the classic Masters if the Universe characters. There haven't been many New Eternia figures released yet but getting Jitsu so early in the subset was a cool surprise. Jitsu's a character figure that everyone remembers due to his figure but that never seems to get any attention in MOTU media. It sounds like New Eternia is going to end up having a comic book tie-in, which should be interesting as there seem to be a number of changes to the mythos. For instance, the back of Jitsu's packaging tells us that he's now allied with He-Man. The packaging states: "Rescued from Point Dread Prison by Prince Adam to aid in the search for the Isle of Grayskull, Jitsu – the mysterious man from Gretori – knows more about the legends than anyone in Eternos. Mistrusted as a thief, the master of Martial Arts shows his true colors, aligning with He-Man in the fight to protect Eternia and the Universe."

A heroic Jitsu, huh? I can dig it. Fisto actually had some villainous origins in some of his appearances, too, so maybe these guys will swap? This Jitsu figure can still function as a great "vintage" faithful stand in for your collection but he can also be spiced up with some new details to stand out on your shelf. Let's check out Jitsu after the break... 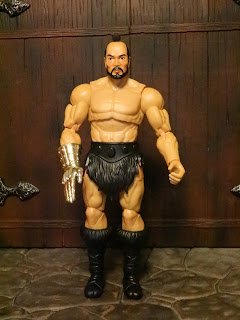 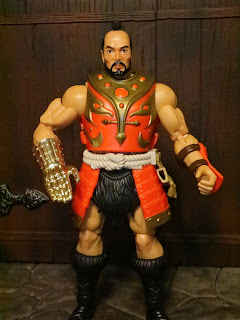 * The overall costume design for Jitsu doesn't really take anything away from the classic look of the character; in fact, it adds quite a bit. He's got waist armor and a bracer on his left arm, kind of like the NECA Staction from the 200x era. The red and golds of armored bits standout nicely from the black details of the rest of his outfit, making for an impressive look. He's has a very ornate aesthetic to him, despite still being only a little bit more clothed than your average MOTU barbarian/ fantasy character. 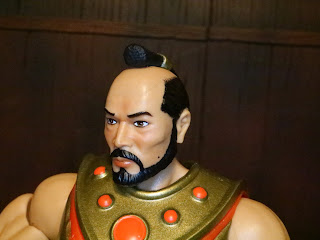 * Since Jitsu isn't a bad guy in New Eternia, his headsculpt doesn't make him look perpetually and ready to kill. Instead, he looks calmer and more wise. it's a really good portrait with some excellent paint, especially on the eyes and facial hair. His top know is well sculpted, too. 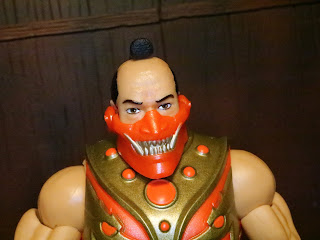 * That's not to say that Jitsu can't "bring it" when it needs to be "brought." He comes with an oni mask with super sharp teeth that can be placed around the lower half of his head which makes him look significantly more frightening. You just pop off his head to slip it over his chin. This is a really cool detail that believe is completely new to this depiction of the character. 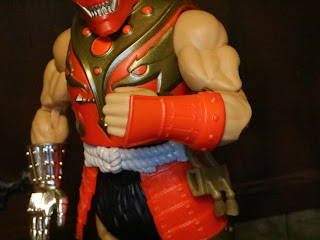 * On his left forearm Jitsu is wearing a removable bracer to give him a little extra protection. 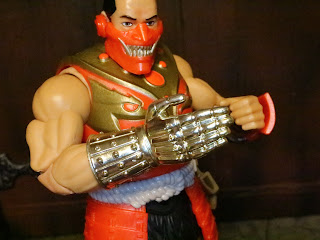 * His right arm doesn't need any extra protection as it's mostly comprised of his massive gold hand, posed in a vicious karate chop. This is a vacmetal piece, not diecast metal like Fisto's was. It looks darn cool, though, and is all nice and shiny. 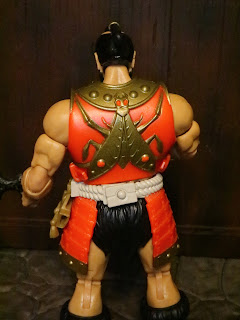 * There's some really nice detail on Jitsu's armor, particularly on the back. I love the insect-like wings design. 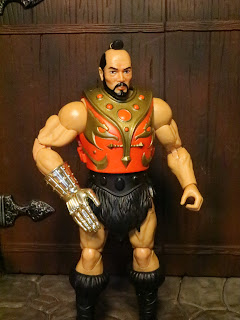 * Want a traditional looking Jitsu? You got it. Just pop off the bracer on his left arm and the belt and you've got a Jitsu that looks pretty close to his vintage look. I know that the Masters of the Universe Classics Jitsu has gotten pretty pricey, so this might make a good fill in if you missed out on him in MOTUC or if you started collecting that line after it ended. 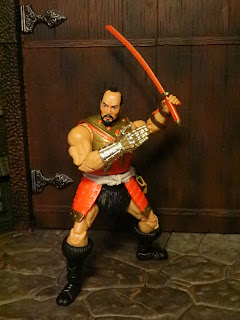 * Materverse has very solid articulation and Jitsu is one of the best in the line. The line really does have some of the best articulation I've seen on a Mattel action figure. He moves freely, has a nice range of motion, and the joints are plentiful. He's just a great character for posing and making look cool. 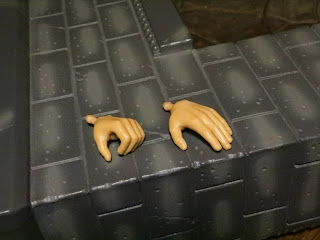 * Jitsu has two swappable left hands: One designed for gripping his katana and one with an open palm for karate chopping. 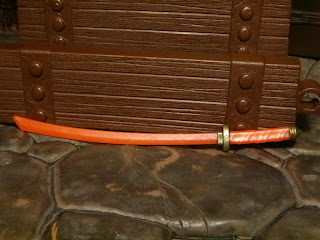 * Jitsu comes with an orange katana, just like the vintage toy. It's made from a pearly looking plastic, so it has an interesting finish, and it has a few gold paint applications on the hilt. 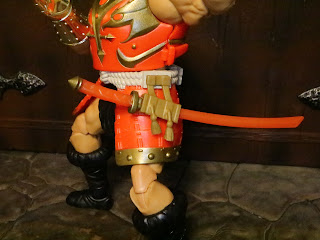 * When not in use the katana can fit into the small sheathe on Jitsu's belt.

* So... Jitsu can only hold the katana in his left hand. Shouldn't the sheathe be positioned on his right hip? The placement seems incorrect here unless his right hand is way more dexterous than we've been led to believe. 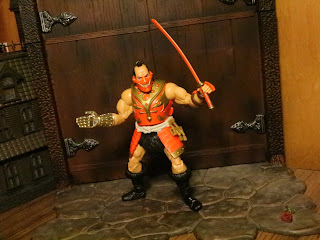 Jitsu turned out very well. He loaded with cool armored pieces, has multiple ways to change up his appearance, and he has a massive metallic hand. What's not to like? He's a Great and a 1/2 figure and one of my favorites of the year in Masterverse. There's plenty of classic stuff to love about the New Eternia Jitsu but the fresh stuff like the Oni mask, the sheathe, and the additional armored pieces possibly inspired by the Staction really make him feel fresh and exciting. Jitsu's now a hero? Cool stuff! I'm digging it. Whether he ends up facing off against a now evil Fisto or they become pals who decimate evil with metal fists of fury, I'm down for it.


If you're a fan of Jitsu I've also reviewed the MOTU Origins Jitsu, the Super7 Filmation inspired "Chopper" figure, and the Eternia Minis Jitsu.