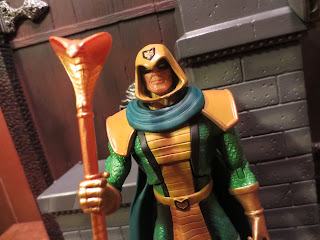 One of my favorite things about going to a convention or toy show is rummaging through boxes of action figures to pick up items I missed out on previously. In one box of loose figures I managed to find Lord Naga, AKA Kobra, from Mattel's DC Universe Classics line. While the majority of my DC Collection is Batman related characters (actually, the majority of my collection is Batgirl stuff, followed by Batman related stuff), I do have a nice little subset of the many great Jack Kirby created characters from DC Universe Classics. While this isn't a Kirby design for the character, it looks really cool and it was $10 bucks, so I picked it up. While I was a completest on DC Universe Classics for quite some time (from series 1- 12), a number of factors, namely the Wonder Twins and Gleek fiasco and the notoriously hard to find Wal-Mart waves, caused me to drop the line except for the occasional Batman character. Kobra (Lord Naga is an alias of the character, so there must have been some legal reason that name having been used) appeared in series 19, the penultimate series for DC Universe Classics which features the Collect & Connect figure S.T.R.I.P.E. Since I bought this guy loose and cheap the build-a-figure piece wasn't included, but I'm not miffed about that. I'm just interested in scoping this guy out. Ready for a closer look? 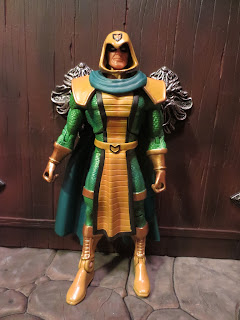 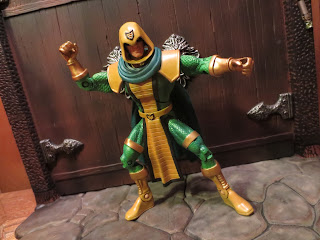 * While the articulation is starting to show it's age, I still like the basic DC Universe Classics bodies. I especially like when we get a unique body in the line, though, and Kobra definitely seems like a pretty original sculpt. I'm sure he could have shared his arms or boots with someone else, but overall he seems incredibly unique. His articulation is tight, plentiful, and doesn't feel at all fragile. 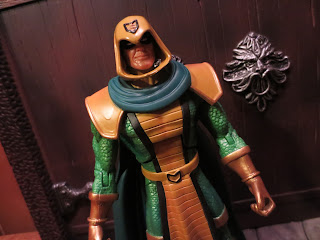 * Check out this sculpt! For being a crazy leader of a snake cult of some kind who isn't Cobra Commander, Kobra/ Lord Naga is a sharo dressed guy. I love the serpent skinned armor on his limbs and torso as well as the strip going down his torso that looks like the body of a serpent. This guy looks dressed to impress and wouldn't be out of place hanging out with King Hsss or Cobra-La. 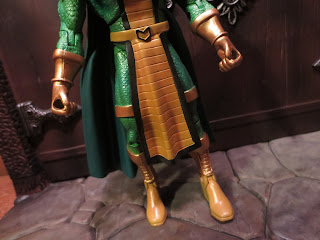 * To complement the excellent sculpt and texturing on Kobra is a darn fine paint job. I love the blend of gold and metallic green as it not only looks good together but it also calls to mind Serpentor from G.I. Joe. The black trim on his robe not only nicely edges that piece (which looks like a snake's belly) but it also helps to break up the colors. Of course, there's also not just gold paint but also mustard yellow to differentiate materials. Mattel really did a nice job on ol' Kobra here. 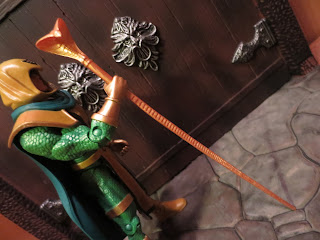 * Kobra comes with a staff that wouldn't look out of place in Masters of the Universe Classics. This could easily have been a variation of Teela's Staff of Ka or something used by King Hsss. It's a cool extra and Kobra looks pretty regal holding it.

* Of course, remember that this guy came with the torso to S.T.R.I.P.E., a pretty decent sized build-a-figure, too! 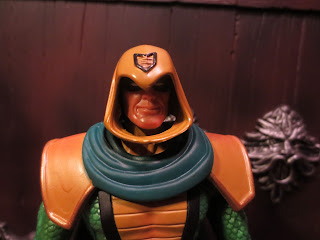 *I really like the way that Mattel captured the shadowy look that Kobra's face has in this outfit by giving him a domino mask and positioning his head fairly high up inside of his hood. What I'm not such a fan of, however, is the way that the hood rests so high above his neckline. In most comic art the base of the hood is covered by the green scarf of his cape that is wrapped around his neck; here is just hands loose and looks kind of odd. 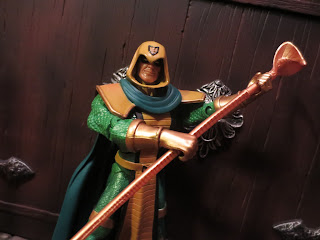 Kobra isn't a character I'm very familiar with but he's an amazing figure. Over the past year or so I've looked at a few DC Universe Classics figures from the latter half of the line (which I missed out on the first go around) and I absolutely think Mattel put out some real gems there. The problems seems to be that they put out too many obscure characters and not enough known characters. I'm not advocating for 100+ version of Batman and Superman, but DCUC left a number of major characters untouched. Still, Kobra is a Great and a 1/2 figure, and well worth tracking down to anyone with an interest in serpentine action figures. Pose him with your Snakemen as King Hsss' emissary and let the fun begin!

I haven't reviewed any other figures of Kobra/ Lord Naga on here. Actually, I've only reviewed a few figures from DC Universe Classics: