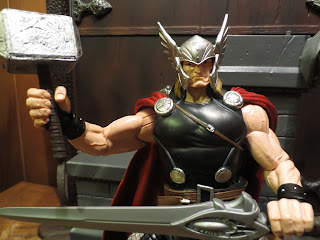 My Heroes-Con 2016 Haul continues with another Marvel Legends figure I picked up: Thor! Based on the Marvel Now! version of the mightiest Avenger, this version of Thor was included as part of the Marvel Legends Infinite Series assortment which included the parts to build The Allfather. I've reviewed a couple other figures in this same series (the amazing Captain Marvel and Scarlet Witch) but certainly not enough that I plan on attempting the Allfather. That doesn't mean I didn't need a cool Thor for my shelf, though, so let's check out this bad boy, shall we? I haven't owned many Thor figures in my life so it's kind of interesting to be opening one. I have one from a Marvel Universe comic pack (the Enchantress set) and an Ultimate Minimate version, but that's it. As a kid I had the original Toy Biz Thor that came with a lightning bolt and Mjolnir, but I have no idea where he went. I sold off most of my Marvel and X-Men figures from Toy Biz at some point as a kid so I'm definitely not swimming in Thor figures in my collection. Good to have one then, huh? 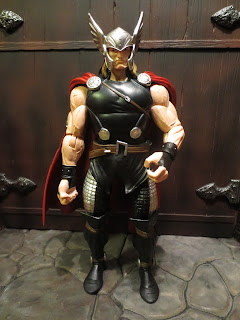 Accessories: Sword, Mjolnir, and the right leg of The Allfather build-a-figure. 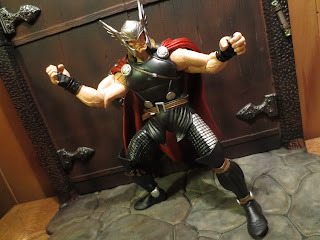 * Hasbro's recent Marvel Legends figure have, for the most part, been excellent toys. Thor is no exception as not only is he sturdy and fun to play with but he's insanely huge. Seriously, this guy is almost as big as the Hulk. That's awesome! I love this bigger, brawnier version of Thor. 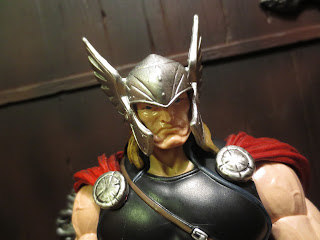 * This version of Thor definitely looks a bit more like a brutal warrior than the dreamy Chris Hemsworth (or so my wife and her friends tell me). I like this headsculpt. It's definitely not a typical Marvel Legends look but it defintiely captures a different side of the Thor helmet. I'm also digging that majestic helmet. 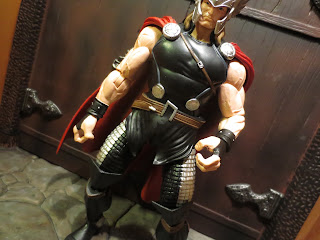 * Thor's outfit is a nice mixture of his classic look with bits and pieces of armor here. It has quite a few cool details while managing to not overwhelm the basic Thor design. 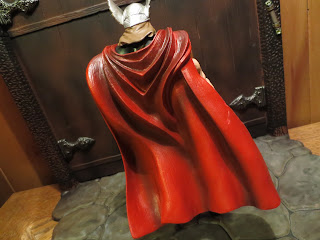 * Thor's rocking his red cape which doesn't seem to be that unusual of an action figure cape: It's sculpted with some folds and it's molded in a somewhat pliable material. Nothing special, really, but that dark shading on it just makes it look so much cooler. Seriously, techniques like shading and washing do wonders to improve the look of most toys. 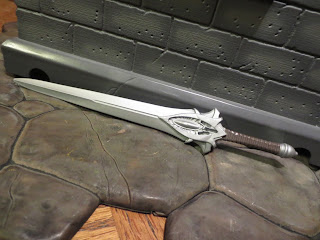 * This is a frigging wicked sword. Check out this monster: It's six inches long and actually pointy enough to hurt if you poke yourself with it. I love this thing! 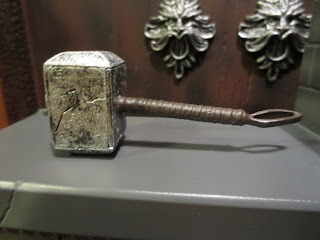 * Thor also comes with his iconic hammer Mjolnir, forged from uru by Dwarven blacksmiths. This is a gorgeous sculpt and features some awesome detailing along with a great dark wash on the head. This is a decent sized hammer befitting the favorite son of Asgard. 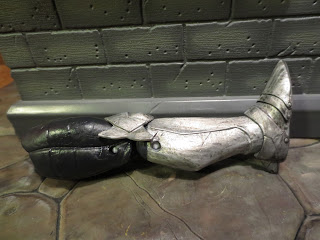 * Again, I'm not trying to build the Allfather or anything but I always appreciate a toyline that offers up a Build-a-Figure. While I haven't built a Marvel Legends build-a-figure since the Iron Man 3 Iron Monger (which the Reel Brad Bell helped me to complete), I do appreciate on lines I do complete (such as Mattel's DC Multiverse). 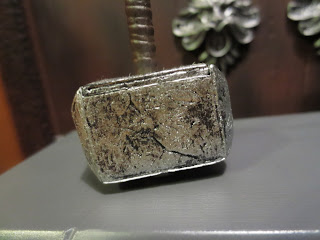 * My biggest disappointment with this figure is that Mjolnir doesn't have the famous "Whosoever holds this hammer, if he be worthy, shall possess the power of Thor" inscription on it. That's something that even the 1/18th scale Marvel figures have had for a few years now. What gives, Hasbro? 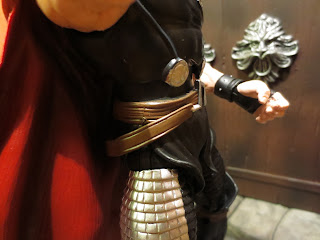 * Thor has a leather strap on his hip that is attached to the front and back of his belt by small pegs. It's intended to be unhooked so that Mjolnir can hang on there at Thor's hip. Unfortunately, the back peg falls off every time I even look at it. I'm not sure what the problem is (it seems the back peg might be too small or too soft)  but it's rather frustrating. 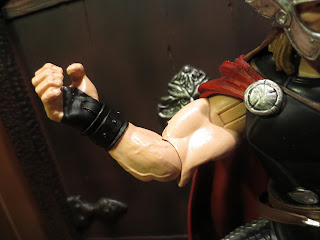 * I'm also a bit aggravated that Thor has such limited articulation on his elbow hinges. See that right there to your left? That's as far as this guy can bend his elbows. Pretty weak, right? 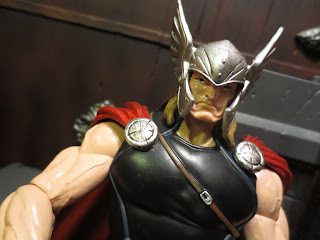 While there are a few problems with this guy, I'd have to say that he's still a Great figure. This guy is really fun and rather different from many of the Thor figures we've seen associated with the Marvel Cinematic Universe. He's big, beefy, brawny, burly, broad, bladed (he has a sword), barbarous, and ..... warlike. Yup, that's it! Thor's a fun pickup and an Avenger that was missing from my roster. Now I need an Ant-Man something fierce!


Oddly enough, this is the first Thor figure I've reviewed on this site. I actually think it's the first 6 inch scaled Thor I've ever owned, too. I've reviewed plenty of other Marvel Legends figures, including: