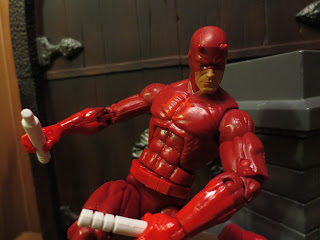 Today is the first installment in a short series that should take up a week or so: My 2016 Heroes-Con Haul! Yeah, I'm perpetually behind so it takes me a bit longer to put up reviews of stuff and today I begin looking at figures I purchased on June 18th at the Heroes Convention in Charlotte, NC. The first figure I'll be looking at is from part of a pretty cool lot of Marvel Legends figures I picked up: Daredevil from Hasbro's Marvel Legends Infinite Series. Released in 2015, Daredevil was part of the Spider-Man themed Hobgoblin build-a-figure series. I maybe saw this guy in stores once or twice last year and I kind of regretted not picking him up since I'm absolutely loving the Netflix series (I really want figures based on that!) and wanted to add ol' Matt Murdock to my Marvel collection. Ready to tangle with the Man Without Fear? Then join me after the break... 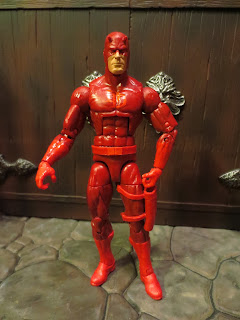 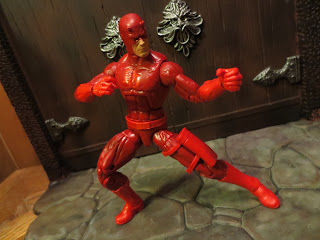 * Hasbro has continued to improve the articulation on their Marvel Legends figures and last year's were pretty impressive. I love that they have both double-hinged knees and elbows as well as really good swivel/hinge ankles that allow for excellent wide, superhero-like stances. 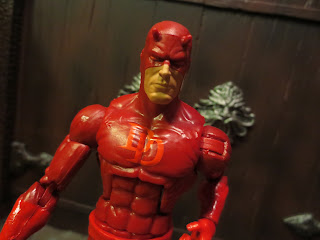 * While most of this figure is probably reused from some other standard body, the masked head looks pretty good. When you see this guy you'll say to yourself "Yup, that's Daredevil all right." What more could you want? I like the logo and the various shades of red used on the figure to liven things up a bit. 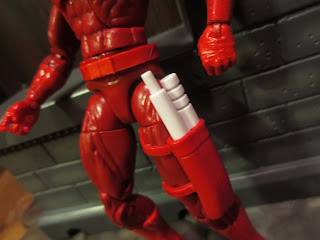 * While this figure doesn't have a lot of "unique" aspects to it, I do like that he has a holster for his two part baton accessory (I'll get to those in a minute). The holster probably could be removable if you out the effort into it, but it definitely is a separate pieces that can shift around a bit on Daredevil's left thigh. Both clubs fit in quite well and it gives you some variety in posing the figure. 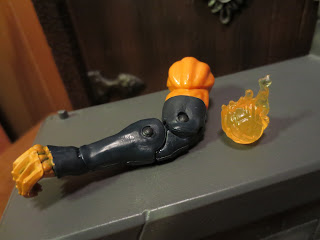 * I'm not going to be completing this build-a-figure of Hobgoblin but I definitely appreciate that Hasbro continues to release build-a-figures. What's even better than getting a random limb is getting an accessory such as the Hobgoblin's pumpkin bomb. It's translucent and pretty cool looking. 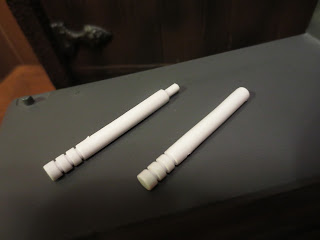 * Daredevil comes with two white batons that can attach together to form a longer staff. I'm not sure if this was done to try and pay homage to Matt's special baton that converts into a blind cane and a grappling device, but that's what it kind of reminds me of. Unfortunately, both pieces are way too rubbery. We're talking that these feel like a fruit snack rubbery. Kind of disappointing, actually.

* A problem that has plagued a number of Hasbro figures over the past few years pops up here, too: Rubbery elbows and knees.  This has absolutely improved on many figures, particularly this year's but Daredevil has the same over rubbery elbows and knees that make the figure feel a little too flimsy. I'm just not a fan of them. 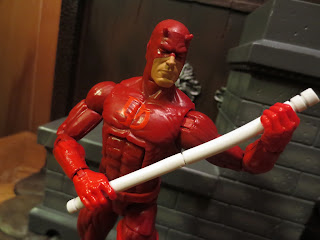 Daredevil isn't a bad figure at all, and I've certainly read many reviews where people went nuts over him. He feels just a bit above average, though, when it comes to some of the great work Hasbro has been doing with Marvel Legends over the past couple of years, though. A better accessory, an unmasked portrait, or some other little extra would have gone a long ways to spicing up this figure. Factor in that lack of a "wow" figure with the rubbery joints and this guy takes a bit of a hit. He's a Good and a 1/2 figure, but he could have so easily been more. Much more.

I haven't reviewed any other Daredevil figures on this site but I have reviewed plenty of other Marvel Legends figures, including: