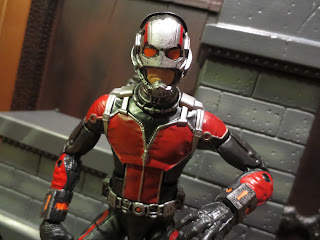 A few weeks ago I traveled to a smaller convention in Shelby, NC: The Shelby Comic Con! It was a pretty great smaller comic show that seems to have plenty of potential to grow in the future. While there weren't a ton of vendors there I did still make one purchase that brought a smile to my face. I was browsing a table with a friend when I noticed someone had the Marvel Legends Infinite Series Ant-Man figure from last summer. I loved the film Ant-Man and have really been wanting to pick this guy up but his price has jumped over the past few year. I asked the dealer how much for this and was shocked when he told me $10. $10?! That's less than the retail price and this guy was full blown mint on card! I was pleasantly surprised and bought this faster than you can say "Baskin Robbins always finds out." Ready for a look at the action figure based on Paul Rudd's portrayal of Scott Lang, AKA Ant-Man? Then join me after the break... 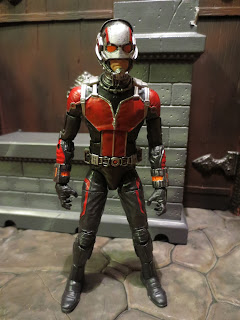 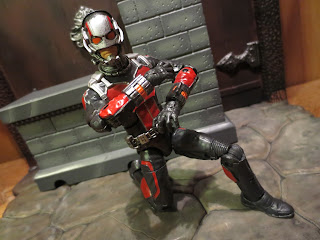 * I'm honestly now kind of up in the air about which mass market toyline has the better articulation: Mattel's WWE Elite series or Hasbro's Marvel Legends. Hasbro is putting out some killer figures that are durable, well designed, and plenty of fun to pose. I really wish they had the DC license. 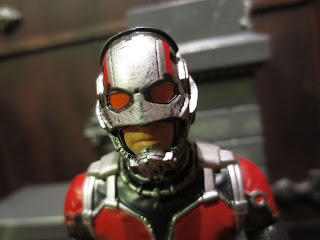 * I'm really digging this headsculpt. It actually looks like a person wearing a somewhat bulky helmet and the color choices for the paint are great. Hasbro has really been doing excellent work on the Marvel Legends line and this is definitely one of my favorites from last year's offerings. 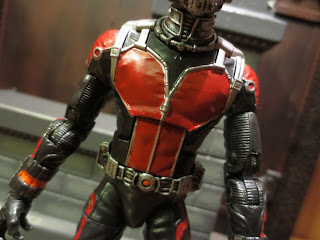 * The suit looks really good. The sculpt is excellent (it's completely unique) and the paint work looks really sharp. There are a number of different textures on the suit and they're all nicely reflected in the sculpt. 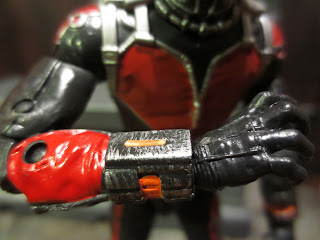 * The little paint details on this figure really go a long way towards just making this a better looking figure. The dry-brushing effects on the "techy" bits of the Ant-Man suit really turned out well here. 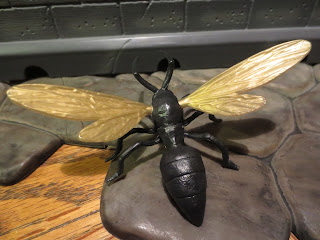 * Want to talk about a cool accessory? How about the fact that Ant-Man comes with a figure of his sidekick Antony! This is a decent sized companion figure that might be out of scale with Ant-Man, but he's a really neat extra. I like the sculpt and paint color chosen for the wings. 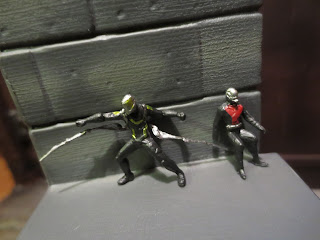 * To recreate some of the battles in the film this set comes with two micro-figures of Scott and Yellowjacket. And yes, this is the only Yellowjacket toy Hasbro made. They're both around 3/4ths of an inch tall and have decent paintwork (certainly better than most of Hasbro current Micro Machines figures, anyways). This is a cool little extra. Huh, but isn't it weird that Ant-Man's sitting? 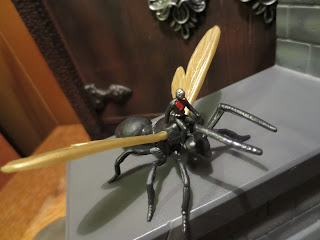 * It turns out that Ant-Man is sitting because he can ride on Antony! How cool is that? This is a fun feature and I'm really digging it. This is definitely an example of Hasbro going the extra step to offer something really cool with this figure. 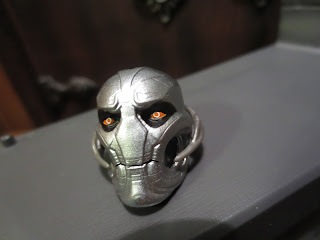 * Ant-Man was part of the build-a-figure series that included the parts to build an Age of Ultron inspired Ultron figure. While Ant-Man only comes with Ultron's head, that's actually a pretty cool accessory to have. You could put it on display in the Avenger's trophy room. Or pretend that Scott Lang stole it from someone. The possibilities are endless! 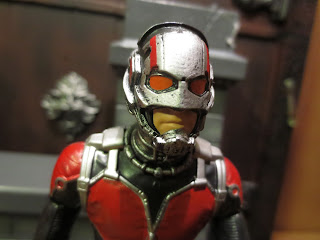 *So...that's not exactly the helmet that appeared in the movie, is it? Nope, it's not. It turns out that Hasbro based the figure on the earlier costume designs for the film that were inspired by the comic versions of Ant-Man with an open lower face plate. This is still a good design but it's not movie accurate, something that's always worth noting when discussing a film based action figure. 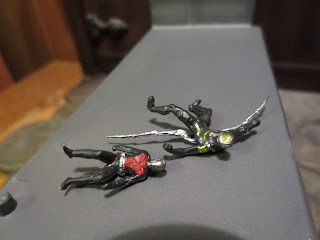 * There is one little problem with these teeny, tiny micro-figures: They don't stand on their own. I know Scott is designed to ride on Antony, but what about Yellowjacket? Surely a Micro Machines styled base on the bottom would have been a good idea, right? 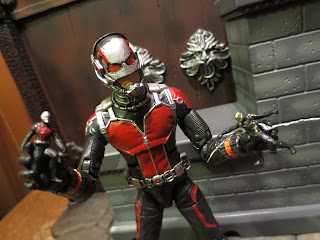 I have to admit that for a standard Marvel Legends figure, Ant-Man feels way more deluxe than most other figures in the line. The sculpt and paint is exceptional, the articulation is nearly flawless, and the little extra accessories are just fun. Factor in my love of Paul Rudd's Ant-Man and this guy gets an Epic rating from me. I loved Ant-Man's appearance in Civil War and while we'll probably see Scott Lang in toy aisles again, this guy is still worth hunting down. Heck, since he's only a year old you still may find him on toy shelves somewhere if you're lucky.

This is the first Ant-Man figure I've reviewed on the site although I have reviewed plenty of other Marvel Legends Infinite Series figures, including:

Marvel Legends Infinite Series: Spider-Man by Hasbro
Jack O'Lantern (Villains of the Night)
Spider-Girl (Warriors of the Web)
Posted by Barbecue17 at 7/30/2016