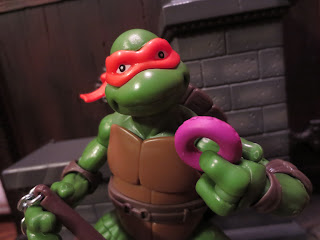 Today I'm looking at the third figure in Playmates Toys' Teenage Mutant Ninja Turtles Classic Collection series based on the 1991 film The Secret of the Ooze: Michelangelo! These figures are exclusive to Wal-Mart and seem to be celebrating the 25th anniversary of the film as well as hyping up old school fans for Teenage Mutant Ninja Turtles: Out of the Shadows. While I've pretty much abandoned Playmates' cartoon and movie focused TMNT toylines, I still have to give them mad props for what they're doing. Playmates has kept that line stocked and on shelves with consistent turnover and plentiful stock since 2012. The line has been in a largely consistent scale (even between the movie and cartoon based lines) and has included vehicles and playsets. Huge playsets! While Hasbro certainly cuts corners, they also seem to be able to pull off all of the stuff that other toy companies claim is impossible in the toy aisles. They consistently put older figures back into rotation, sell massive play-sets, and feature dozens of ancillary characters, all at reasonable prices. Seriously, Playmates manages to do stuff that Hasbro couldn't do with The Force Awakens. Of course, as I mentioned above, those cut corners did cause me to lose interest but there's no way on earth I could say no to a Michelangelo figure packaged with combat cold cuts. Ready for a closer look at this new figure? Then join me after the break... 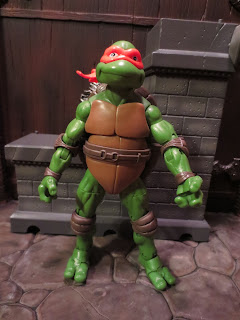 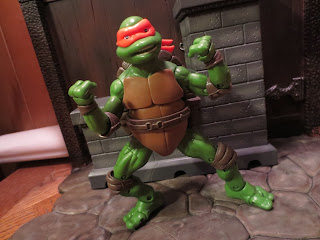 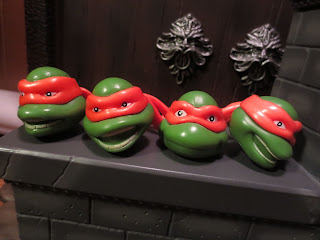 * Here's something I find amazing: Michelangelo comes with four interchangeable headsculpts. Four! That's crazy! I'm not sure I own any other figures that came packaged with four different headsculpts. They're all unique, too (not shared with his brothers). I know there isn't a ton of paint work here but they do give you a wide range of expressions and bandanna positions. Yes, some of the bandannas are hanging straight down while others are sculpted in a flowing position. They're super easy to swap, too! Cowabunga! 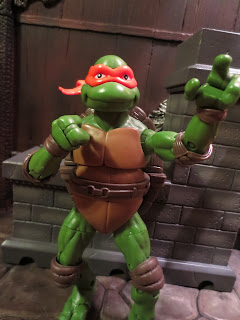 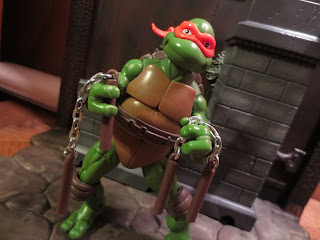 * As you could probably guess, Mikey comes equipped with two pairs of nunchaku. They're not connected via leather cords like in the film but it's tough to argue with getting some accessories that utilize actual chains. There aren't any paint apps on these but there is a bit of wood grain sculpting. 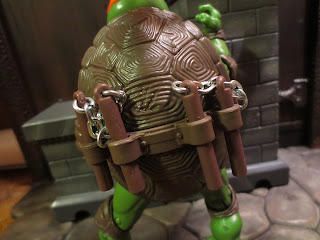 * As you would also expect, you can store Michelangelo's nunchaku in the loops on his back. They stay in there nice and tight and look great. 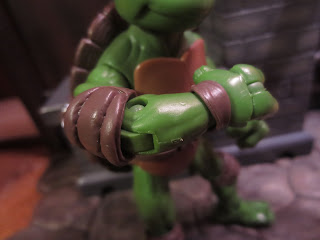 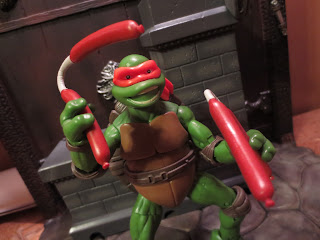 * Of all four figures in this set I do believe Michaelangelo has the best accessories. First, he gets the "combat coldcuts" from the opening fight scene. To this day few moments in a movie get me as pumped as hearing the TMNT 2 theme and watching them fight the bad guys in the mall. These are really sill accessories but they're something that I absolutely love. Just the fact that these exist pretty much makes my year. 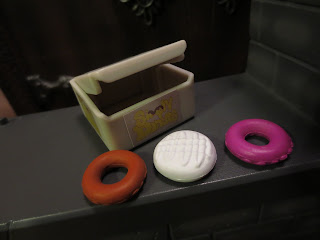 * The other accessories that Michelangelo comes with is a doughnut box and three doughnuts. Remember in the film when the turtles attempt to use the doughnuts to disguise a retro-mutagen pill to revert Tokka and Rahzar back to their regular animal forms? Now you can reenact that scene! The box doesn't open and close but it is hollow and you can fit the doughnuts in side. Incredible! 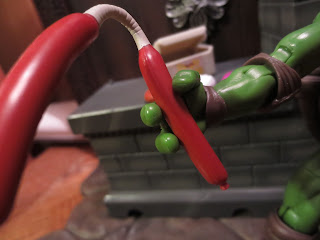 * Because the fingers are all individually articulated, it takes a bit of finesse to securely place weapons in Donatello's hands. I remember this problem with the earlier cartoon inspired Classic Collection figures and I can't say I'm glad to see it return. It definitely seems to promote the idea that these are for display rather than play as the weapons and accessories can easily fall out of the hands when the figure is shifted. Just be patient and try different things out and you should make it work, though. 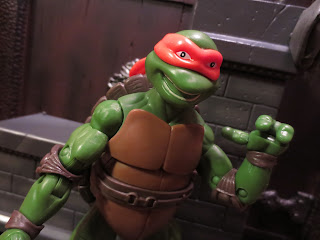 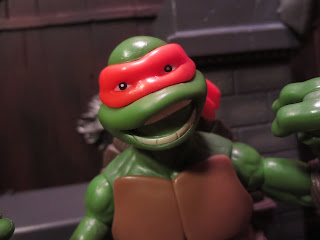 * Michelangelo might be the weakest figure in the line due to the fact that his head looks overly toy-like and his mouth is wide open. I don't mind the open mouthed expressions at all but I'm definitely wishing Playmates had painted the inside of the mouth black or something. 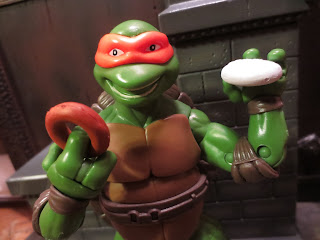 Here's the thing: These may not be perfect figures but my gosh is Playmates giving you a lot for your money. Compare the number of accessories they give you (four portraits and 8-9 accessories, some with paint applications) and the amount of articulation here with anything else on the shelf at your local store. There's no doubt you're getting an insane deal! On the next episode of the Collection Agency Brad and I will be discussing the current trend of high end 1/12th scale lines such as S.H. Figuarts, Mafex, Figma, and others. Take a look at those lines and the typical mass market collector lines like Star Wars Black, Marvel Legends, and DC Comics Multiverse: Which of those groupings does this line more resemble? I'm really leaning towards the higher end lines simply in terms of what's offered. Playmates has given collectors and TMNT fans a pretty great gift with these and me and my little one are having a blast (she loves the TMNT)! While Mikey's weaker head sculpts and paint work bring him down a bit, he's still getting a Great and a 1/2 from me as he's quite possibly one of the best action figure values you'll find this year!

If you're looking for more figures of Michelangelo, check out my reviews of the D&D themed Mikey the Elf and the ultra stealthy Stealth Tech Michelangelo.

I've also reviewed two other figures in this series: