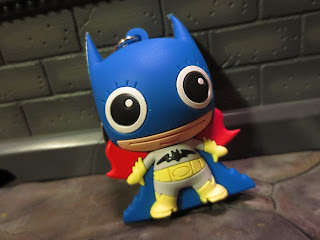 Near the end of last month I shared a story of sitting on the floor of a Books a Million for the better part of an hour feeling for Batgirl figures in blind bags. One of the two mystery figures I picked up that day was this Batgirl figural keychain from Monogram International. Batgirl is part of the third series of these and comes blind bagged in a foil pouch with a little piece of cardboard which I guess is supposed to help preserve the mystery aspect. It failed, though, as I was able to tell that this was indeed Batgirl. I will say, though, that at first I was carrying a figure up to the register whom was not Batgirl. While waiting in line I kept feeling through the figures and realized that I thought I was feeling wings and not bat ears, meaning I'd picked up Hawkman instead. I hopped out of line and began sifting through the bin of foil bagged frustration again until I was sure I'd found Babs. Surprise! I found her and ended up being 2 for 2 that day in determining blind-bagged figures! Ready for a look at a funky keychain? Then join me after the break... 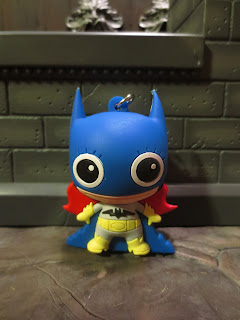 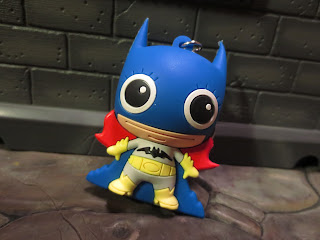 * I really like how the details are etched into the rubbery plastic used here. It absolutely helps to define each little detail and keeps the colors separated. I'm not wild about the eyes, though. They kind of remind me of the animation style of Bob's Burgers which doesn't exactly appeal to me. Still, it's an interesting look overall and definitely different from what we typically see in DC products. 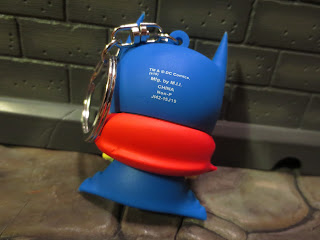 * Another thing I really like about this figure is how bright the colors are. Now if you actually toted this thing around as a keychain in your pocket, purse, or satchel, I'm sure they'd get grubby pretty quickly, but right out of the package the vibrant colors look great. She's made from a rubbery material that has a little give to it, particularly on the sides, cape, and ears. 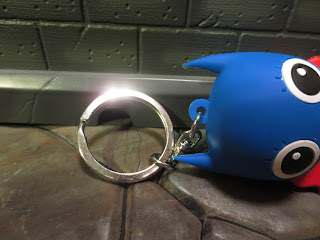 * Since these are billed as keychains, you can expect that there's a metal key ring loop on the top. One thing about this keychain I'm not wild about is that the bottom of the figure isn't flat and cannot stand on it's own. I can definitely see people buying these, removing the ring, and displaying them. You'll have to be a bit crafty to show these off, though, as they're not going to stand in one spot. 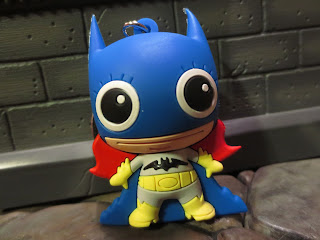 Typically I'm not much of a blind bagged buyer nor a keychain buyer. Of course, I always make an exception when it comes to Batgirl and I just had to pick one of these up. While I'm not wild about the enormous eyes that make her look like she's hopped up on some illicit street drug, I'm digging everything else. This is a Good 1/2 little impulse item and while I don't think I'll be picking up any more, the series itself is pretty strong. I almost didn't buy this one because I wasn't completely sure it was Batgirl, but I finally told myself that I liked every character in this series (Supergirl, Green Arrow, Cyborg, Hawkman, Martian Manhunter, Black Canary, Deathstroke, Poison Ivy, and two mystery exclusives that appear to be the Joker and Harley Quinn) so even a bad pull was still worth it.

I've reviewed a ton of Batgirl stuff and you can check it all out at my cool virtual Batgirl museum!