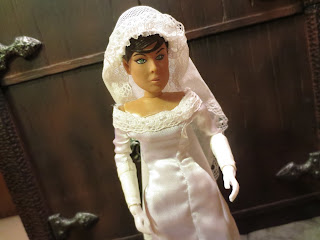 You gotta give a company credit when it finds it's niche: Figures Toy Company has been able to release wave after wave of Mego inspired figures based on the classic Batman television series. We're not just talking the four villains and three heroes that Mattel and a few other companies have gotten around to; we're talking characters like Shame, Mad Hatter, and Bookworm along with insanely episode specific variants such as the subject of today's review: Barbara Gordon in the wedding dress she wears in the 3rd season episode "Enter Batgirl, Exit Penguin." The general plot of the episode? Penguin tries to marry Barbara Gordon so that he'll be Commissioner Gordon's son in law and thus will have immunity from prosecution. That's not really the way these things work, right? Anyways, this figure is an extremely episode specific variant and is a limited exclusive (500 pieces) to Toycade. Ready for a closer look at Barbara Gordon as the Penguin's Bride? Then join me after the break... 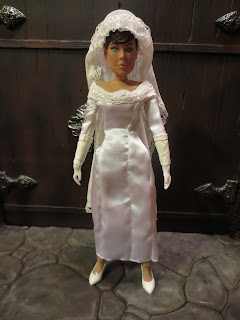 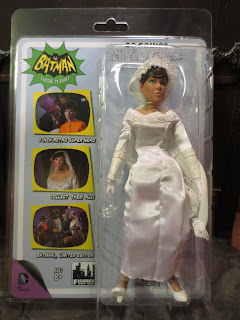 * I rarely talk about packaging in my reviews but I tend to make an exception when the packaging is intentionally reusable. There's a plastic zip-tie through the peg hole that says Figures Toy Co. Once you remove that you can easily open and close the durable plastic clamshell. There are some twist ties but a little work will allow you to keep your Barbara Gordon figure on display. I think she looks great in the package as it's very personalized for her with a picture of her in this exact outfit and a few other shots from the show. 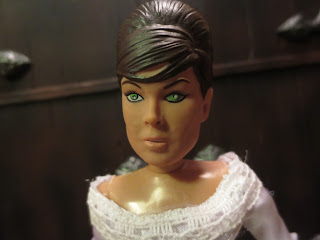 * I've reviewed a few different Barbara Gordon figures from Figures Toy Co., all of which use the same headsculpt, and I'm still divided on it.  If you look at the headsculpt from the nose up, it's pretty good. The eyes, hair, and nose really capture Yvonne Craig's likeness. Even though this is done in a retro style, it's still quite recognizable. I'll deal with the problems in a minute... 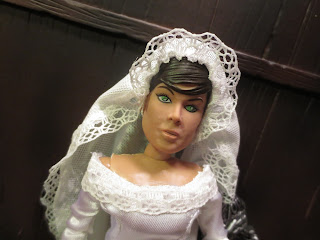 *Batgirl's veil is really a nice piece. It has an attached train (I think that's the right word) and the veil part actually has an elastic band to properly keep it on her head. It looks pretty close to what we see in the episode, so I have to give major props to Figures Toy Co. for really staying true to the episode in making this figure! 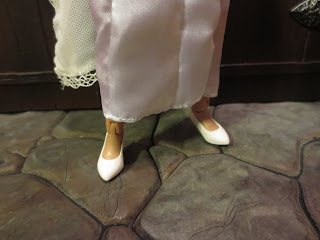 * Remember the problems I had with the shoes on the standard Barbara Gordon figure? Figures Toy Company fixed things by having these crafted as part of the sculpt (or else they're glued on really securely). They look great and don't fall off which I can certainly appreciate after previous struggles with figures in this style. 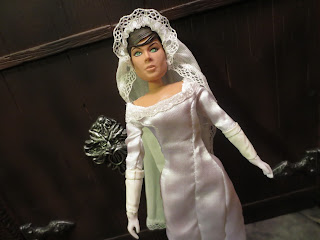 * Sometimes retro styled figures tend to have baggy, oversized clothing but fortunately that's not the case here: This dress is actually very nice and form fitting. It's not skintight or anything but it looks quite nicely tailored and really adds to the appearance of the figure. 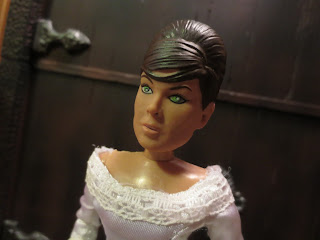 *I mentioned not being fully satisfied with this headsculpt and it's the lower half of the face that's problematic. The jawline seems much too large and rounded. It really just seems far to oversized to work with the rest of the face. Secondly, she has a rather odd expression. I wish they'd gone with a smile or something rather than this odd glare. Everyone was always so happy and silly in the 1966 series and that look would have been so much more fitting. 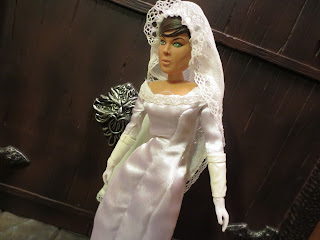 * Since these figures are built using elastic bands and such inside, they tend to have kind of a "herky-jerky" appearance if stuff is too tight. Unfortunately, Babs has this problem and sometimes you'll stand her up only to have her waist joint contort into some other position. Her arms are also very tight and you can hardly move them into another position without them springing back into their default stance. 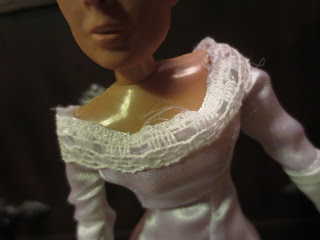 * The lacy trim around her collar is starting to unravel a bit. I'm not sure if this is going to be an ongoing unraveling or if it's a simple QC issue, but it is a bit unsightly. 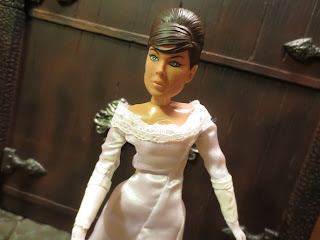 While I'm not really a Mego fan, as a fan of Batgirl/ Barbara Gordon I cannot believe how many unique figures of this character Figures Toy Co. is producing. If you leave these figures in their (resealable) clamshells, you'll have some really cool faux retro collectibles. Taking them out shows a few of the figure's problems but still, this is a pretty cool piece and I love how deep Figures Toy Company is going with this line. This is a Good and a 1/2 figure and is definitely a unique and interesting variant I never thought we'd see! If you're interested in picking her up you'd better hurry over to Toycade and snag one as she's quite limited with only 500 figures available in the run!


I've reviewed a ton of Batgirl/ Barbara Gordon figures, particularly those based on Yvonne Craig's portrayal of the character on the classic TV series:

I've reviewed plenty of other versions of Batgirl on this site too! All of those reviews are housed on my virtual Batgirl collection!
Posted by Barbecue17 at 6/07/2016