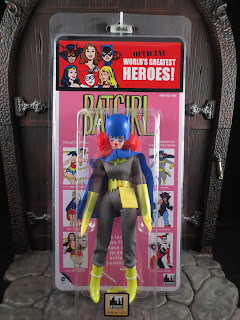 Today's review is going to be similar to my last World's Greatest Heroes! Batgirl figure review in that I'm not even opening the figure. I own the standard version of this figure and I've reviewed the First Appearance Batgirl on here, so today I'm mainly looking at the packaging for this figure Fortunately, the packaging is pretty interesting in that it not only mimics a Mego vintage style but even mimics a vintage style of Mego retailer exclusive packaging. This style of card is referred to as a Kresge style card. Ever heard of a Kresge store? I have, although the only reason is that my father was a manager for Kresge stores during the 1970s and I've heard him talk about them over the years (they essentially morphed into K-Mart, BTW). Since I've talked about this particular figure in a number of different reviews, today I'm just going to briefly talk about the packaging while leaving the rest of the space in this review to let my father talk about Kresge stores and his experiences there, particularly in regards to stocking and ordering toys. Ready for something a bit different today that might give you a bit of insight into the history of toy buying? Then join me after the break... 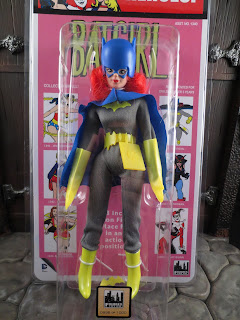 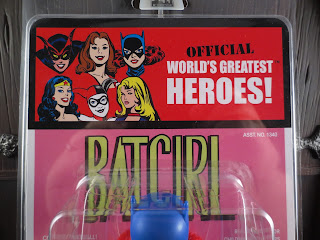 The most unique aspect of this figure is that it comes on a taller, narrower card rather than the standard card. It turns out that these cards are based on a true vintage style of card that was most prominently sold through the SS Kresge and Co stores. Since Kresge stores are before my time and because they are a pretty significant part of the appeal of this figure, I actually asked my father about these. He's not a toy collector but he did manage Kresge stores during this time period. I asked my father for his thoughts on this: 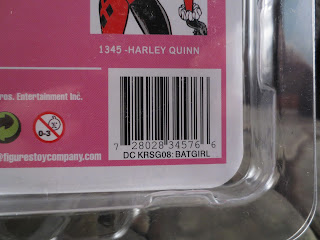 Wow! These are cool and I remember them vaguely. I started with SS Kresge January 7th, 1970 at Town and Country Shopping Center in Whitehall, OH.  I earned 95 cents an hour.  Believe it or not, during my first months working for SS Kresge, we converted from a store with separate departments throughout the store to a checkout concept with registers at the front, with a cashier for "checking out" all merchandise. We got in new electric cash registers as the store had used non-electric, manual registers for decades and you actually wrote sales receipts by hand! 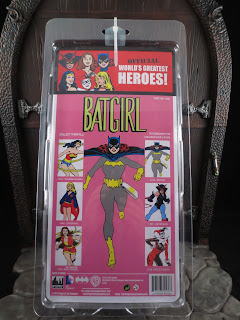 Before we converted to the checkout concept, departments throughout the store consisted of high counters surrounding a work area where "sales girls" worked and waited on customers.  There was no such thing as carded items in toys or elsewhere in the store, such as the MEGO figures, until the 1970s. For the most part, toys came in mostly bulk and the "sales girls" would make compartments or bins made of cut glass for each toy item and use a price tag on each bin.  Matchbox Cars, balls, yo-yos, cap guns, caps, etc, were all displayed in bulk and when you made your selection, the "sales girls" would ring you up on their department register (not electric) and write out a receipt.

When we remodeled my first few months at Kresge, all of those counters went away and we built counters as are used today, called gondolas, that could accept shelves for boxed items and had pegboard so you could display carded toys and other merchandise such as your MEGO figures. 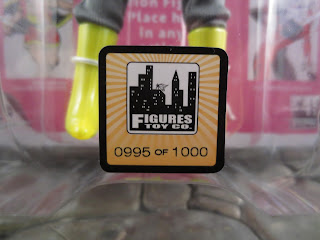 Kresge's, just like Woolworth's, Grant's, GC Murphy's, Kress, Ben Franklin, and many other retailers were referred to as 5 & 10 Cent Stores or Five and Dimes, as in the late 1800's, and well into the early 1900's, everything was sold for no more than 10 cents.   Your info says the figures were sold between 1973 and 1975. I was on leave of absence from Kresge from 71 to 73 to serve in the Navy and when discharged from active duty in 73, started back at Kresge in the Management Training Program in Towson, MD.   Even though the first Kmart Discount Store was opened in 1963, the Kresge Five and Dime Division actually made more profit than the Kmart stores until the mid-70s, then S.S. Kresge, founded in 1899, changed its name to Kmart Corp.  Of course I had a 26 year career there.

So, yes, I'm so old, I worked from when the registers were not yet electric and you had to mark everything with a pricing gun to the day of point of sale and automatic replenishing.  We counted all merchandise every two weeks, figured turnover and how much we needed to stay stocked, ordered merchandise we needed, actually wrote a "purchase order" and mailed it to the likes of Mattel, Hasbro, Kenner, Parker Brothers, etc.,

I hope you found this info interesting! 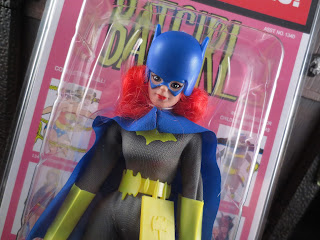 I really appreciate my dad giving some insight into some of the background of this variant as it turned what might have been a pretty dull review into something pretty special. While I'm not a big Mego fan, I really do like the work that Figures Toy Co. is doing with the DC license. When you mix the figure together with the excellent packaging, this is a pretty slick collectible. I'd say that this is a Great product all things considered. Check it out if you're a fan of Batgirl or this particular style as it's kind of unique.

I've reviewed a few other Batgirl figures from Figures Toy Company, including:

You can check out the rest of my Batgirl reviewed in my virtual Batgirl museum right here!
Posted by Barbecue17 at 4/27/2016