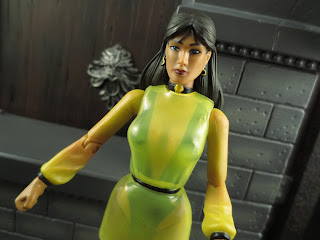 We're now at the last figure I'm reviewing from Mattel's Watchmen series: Silk Spectre II, AKA Laurie Juspeczyk. The daughter of the original Silk Spectre, Sally Jupiter, Laurie has taken on the mantle from her mother and is thus a legacy character (similar to Nite Owl). Since this is the 6th and final figure from this series I'm going to make some statements about the overall line. This line was released in 2013 and thus is about 3 years old now, as is the tie-in series it was released along side of: Before Watchmen. I haven't actually read Before Watchemen yet but I'll probably be doing so in the next few months as just rereading Watchmen and picking up these figures has piqued my curiosity. Still, I think it's clear that neither Before Watchmen nor this series of action figures lit the world on fire upon their release. For this line, I feel that the reason it didn't excel was the reason a number of MattyCollector properties such as Ghostbusters, Back to the Future, and the DC Universe Signature Collection have failed: Matty's tendency is to over promise and under deliver. Rather than just making solid figures or striving to make incredible figures, Mattel makes average to solid figures and then bills them as high quality collectors items. Considering the incredible packaging and marketing, the Watchmen figures just couldn't cover the checks that MattyCollector's marketing department tried to write. Today's review of Silk Spectre II is the perfect example of Mattel's handling of these lines: A mixture of good, bad, strange, and lazy. Let's take a closer look at her, shall we? 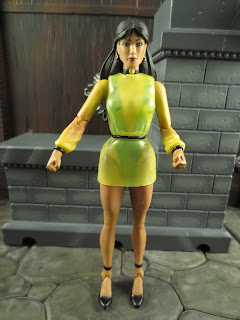 Accessories: Display base and an art print. 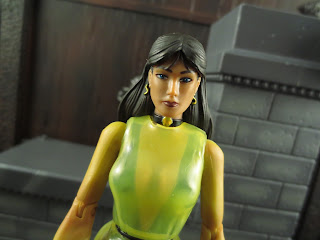 * This is a pretty decent likeness of the Silk Spectre. She quite pretty and has her hip "S" shaped earrings. Since all of these figures appear to represent the crew during their Crimebuster days (prior to 1977) this sculpt of Laurie actually looks a bit younger. I think she works well with the rest of the crew. 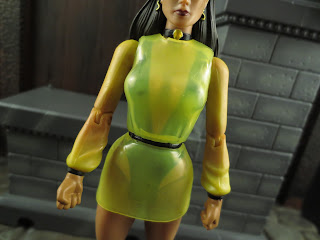 * I have to give some credit where credit is due and definitely compliment Mattel for trying something different: Rather than try to sculpt or paint Laurie's dress, it's an actual separate piece of a thin, rubbery translucent material. It's kind of cool as it's see through and yet there is a standard sculpt with a painted on unitard underneath. The sleeves are sculpted and have an interesting paint effect that makes it look like you can see her skin through the sheer material. 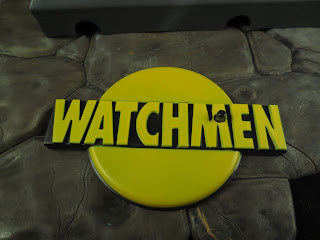 * To help keep her standing up, Silk Spectre comes with the same display stand that every other figure in this line comes with. It's a simple disc and peg stand but the presentation is awesome. The word "Watchmen" is sculpted on the base with a yellow disc behind it. It looks great and functions really well. I wish the DC Universe Signature Collection had come with stands; I'm always in favor of stuff like this, particularly when every figure includes one. 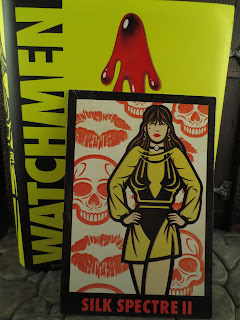 + The Silk Spectre II print is new and features a bio on the other side.

+The Doomsday Clock on the front of the package is set at less than 15 minutes until midnight while the side panels feature the third part of the "Who Watches the Watchmen?" mural and a stylized image of Laurie's choker, lips, and mole. 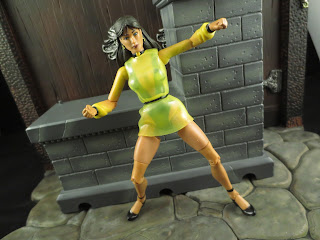 *Not only is the Silk Spectre not as articulated as her fellow Crimebusters but she is not even as well articulated as most other female figures from Mattel's DC lines.  She has some newly sculpted pieces like her arms and head, but they're much more restrictive. The biggest problem is simply that she has no bicep swivel, which really hinders her posing options. 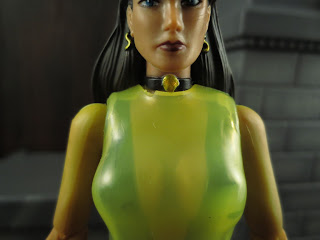 * Two things: First, Laurie's cool skull shaped choker looks like a little gold blob here. This shouldn't have been that hard of a detail to capture. Secondly, where is her mole? Not only is the mole accurate to the comic art but the design on the side of the box actually shows it off prominently with Laurie's lips and choker. How bizarre of an omission? 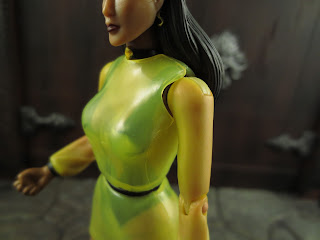 * I praised Silk Spectre's see through dress above, but I did want to point out that it's not perfect. If you look at it from the side, you can see how thick and awkward the sleeves look. I'm not sure what the perfect solution would have been, but it's not this. 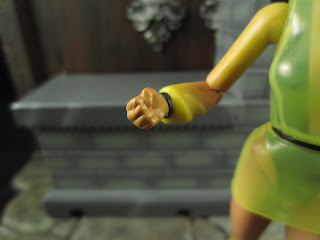 * Again, Mattel drops the ball in the accessories department. Other than the display stand, the figure comes with nothing that can be used. How about at least the revolver she attempts to shoot Adrian Veidt with? Or a bottle of "Nostalgia" perfume? Maybe some extra hands, even, or a little copy of "Under the Hood?" Surely a $25 dollar figure should have included a bit more, right? 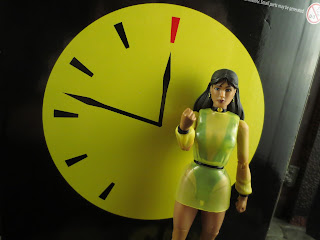 It's sad to say, but Silk Spectre II is the weakest figure in this line. Again, she's that bizarre blend I mentioned above: Goodpackaging and a nice headsculpt, bad articulation and the formless skull on her choker, a strange attempt at executing the dress and the bizarre lack of a mole on her face, and the lazy lack of accessories. At the end, Silk Spectre II is a very Eh figure. Of course, who wants to have 5/6ths of the main Watchmen cast, right? My suggestion is to find her cheap if you need to. Laurie deserved much better than this.


With Silk Spectre II, I've now reviewed the entire series of six figures including Rorschach, The Comedian, Nite Owl, Ozymandias, and Dr. Manhattan. Check the rest out if you missed them! In order, from best to worst, I think this series would be ranked: Rorschach, Night Owl, Comedian, Ozymandias, Dr. Manhattan, and Silk Spectre II.
Posted by Barbecue17 at 4/16/2016