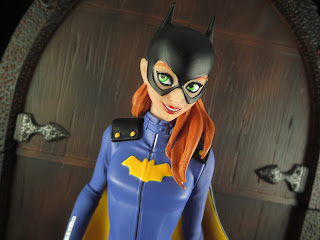 If there's a character who can claim to be the "winner" of the New 52 era, it might just be Barbara Gordon. Over the past five years in the comics Babs has regained her ability to walk, headlined an excellent book that received it's own successful soft reboot, had at least two well received costume changes, and is now entering the Rebirth era with two titles to her credit (Hope Larson and Rafael Albuquerque's Batgirl and Julie Benson and Shawna Benson's Batgirl and the Birds of Prey). Also consider her inclusions in Arkham Knight and DC Super Hero Girls and the flood of 1966 Batgirl merchandise and you have a character who has truly experienced a renaissance. One of the most interesting points of this era was the redesign and soft reboot for Batgirl that has been dubbed Batgirl of Burnside. Brenden Fletcher, Cameron Stewart, and Babs Tarr did something unique with the character during their limited time with the book and it seems that elements of that will follow Barbara into the rebirth era. In the meantime, though, DC Collectibles has released another statue of this particular look under their DC Comics Designer Series banner. Ready for a closer look at this 1/6th scale colorful Batgirl of Burnside? Then join me after the break... 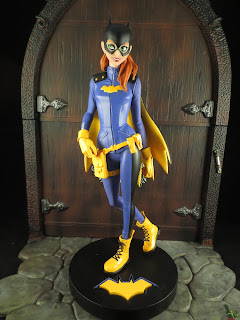 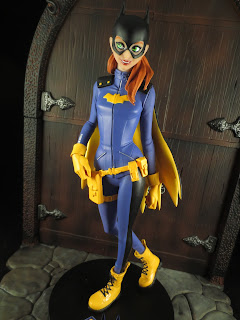 * While this is just an up-sized and painted version of a statue that has already been released, it fortunately is based on an incredible statue of a character design by two incredible artists. One of the things I love best about this statue (and there's a lot I love) is the pose. It's just very casual and fun, which absolutely fits this newew take on Batgirl. That's not saying Batgirl isn't as tough as nails when she needs to be, but she's also a graduate student trying to have some fun in her free time as well. She looks confident, relaxed, and ready to get something started. Batgirl is a bit of a celebrity in trendy Burnside and this statue shows Barbara trying to exude some of the confidence needed to pull that role off. 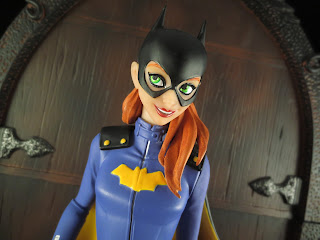 * The expression here is great and really captures Tarr's artwork well. It's an incredibly cute depiction of Barbara in a more relaxed and carefree moment. I love Irene Matar's sculpting and she totally captures this particular version of Babs in this piece. 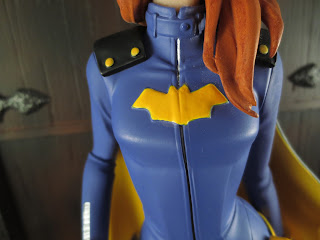 * Batgirl's new costume here isn't spandex or body armor: It's actually a leather jacket that zips up in the middle. While it's somewhat of a stretch to believe that Babs would be using something this simple in light of the events she's gone through in the previous New 52 events such as Death of the Family and Night of the Owls, I guess she feels that Burnside is a bit less crazy than the rest of Gotham. It's not a form fitting outfit but it drapes over her nicely and has some great sculpting to convey the folds of the material. 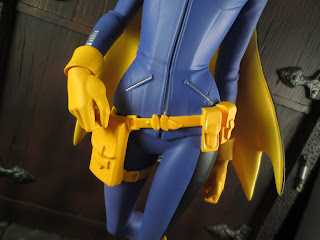 * I'm also digging the work on her very practical looking utility belt. The pouches look like they could legitimately hold a bit of gear and seem rather functional. The paintwork on the zippers for the hoodie styled pockets also looks cool. These colors nicely break up the purple suit. 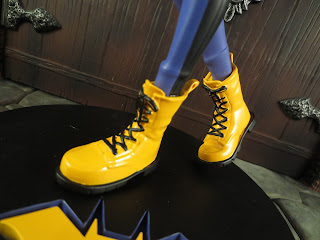 * One of the best things about the new Batgirl costume is that Batgirl has some footwear that I can believe she could literally kick butt in. I'm not saying that you can't fight in high heels or knee high armored boots, but these actually look comfortable and functional. I dig their bulkiness in that they look just a bit larger than the rest of Batgirl's rather sleek costume. The sculpt looks great and the bright yellow paintwork and clean shoelaces really bring everything together. 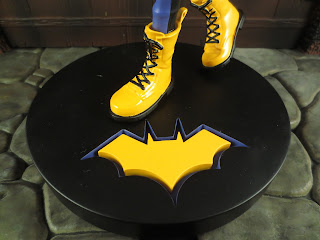 * The base is quite nice and meshes well with he statue. It features a Batgirl logo that is etched into the base itself. I love the effect with the interior of the base being painted purple. It's quite heavy and serves as a very competent display base. Of course, the edition number is written on the bottom. Mine is #4724, FYI. 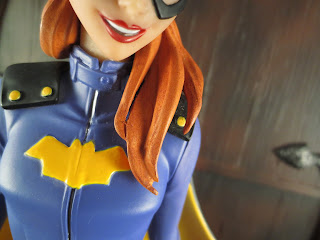 * The thing that I definitely prefer about this statue over the Black & White version is the vibrant paint scheme! The fantastic colors such as the purple suit with yellow highlights, Babs' hair, and her red lips just look awesome. I love how colorful this statue is! 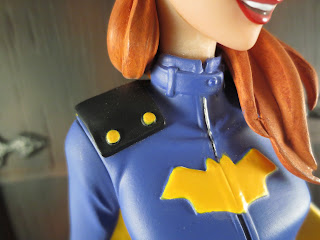 
* If you get close, you can see a couple of details that aren't as visually pleasing as the rest of the statue. There is definitely some visible glue around Babs' neck and the paintwork on her bat-logo is a tad bit gloppy. 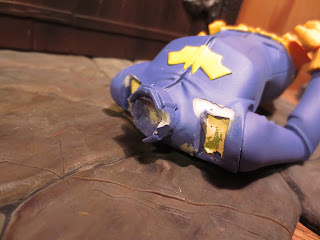 * I'm not holding this against the rating of the figure (because my replacement was just fine! Thanks Big Bad Toy Store!) but my first Batgirl statue arrived broken. I mean broken! The head was snapped off, the collar was crumbling, and the cape was cracked and completely removed. If you purchase this figure either make sure you order from a reputable seller or try to inspect the statue first. 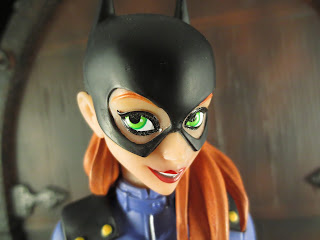 While Batgirl of Burnside definitely doesn't feel like a comic book that was targeted towards hardcore DC and Batgirl fans (it's a bit too "intentionally hip" I absolutely have been enjoying it, particularly the art and the new costume. I'm glad that DC Collectibles has offered up a few collectibles to mark this era for Batgirl fans as it has definitely been five of the most exciting years there have ever been for the character. While this is simply an upscaled version of the Black & White statue, the larger size and the colorful palette definitely make this statue even better. I have to say that this one gets a Great and a 1/2 from me. It's a great piece that I'm really happy to have on the shelf alongside the rest of my ever growing (and possibly world's greatest) Batgirl collection.

I've mentioned a few times that I've reviewed the smaller version of this statue from the Batman: Black & White line but I've also reviewed dozens of other Batgirl statues, toys, and collectibles. Check out my virtual Batgirl museum!
Posted by Barbecue17 at 4/05/2016