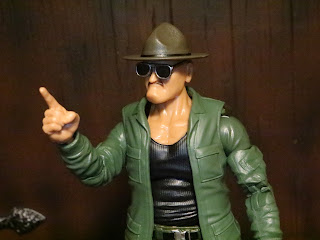 Sgt. Slaughter's appearance in Action Force caught my attention long before anything else about the line did. Obviously I was aware that Sgt. Slaughter has showed up in both G.I.Joe and WWF/ WWE lines, but seeing him appear in Action Force seemed pretty impressive. I mean, how crazy that a line competing with the G.I. Joe Classified Series has managed to get Sgt. Slaughter out there before Hasbro? That's pretty cool and definitely a big flex for Action Force. Sgt. Slaughter definitely has a history with the G.I. Joe brand and it was for that reason that I originally preordered this figure quite some time ago to go along with my Classified figures. Slaughter had four figures in the vintage G.I. Joe line but his last appearance in the line was in 2010 with a very tough to obtain exclusive that I missed out on. Getting this guy was much easier! In the Action Force story Sgt. Slaughter is an advisor to Action Force, a team made up of members of the US resistance against New Colonia and the Swarm and concerned international operatives. Valaverse has already put up a second version of Sgt. Slaughter for preorder so check that one out if you're only planning to purchase one. Let's take a look at this version of Sgt. Slaughter after the break and see if he's got what it takes.... 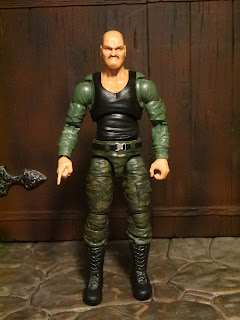 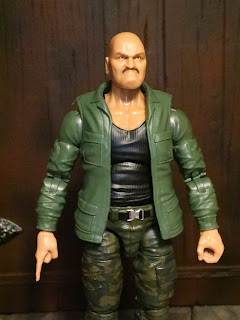 The Positives:
* This version of Sgt. Slaughter definitely looks more like he's outfitted for some colder weather rather than the wrestling ring or leading PT. Yeah, he is wearing a tank top, but he's got a green jacket on, too. You can technically take the vest part of the jacket off but not the sleeves, so don't bother removing it. The detail on the jacket is quite good with plenty of pickets. Sarge is also pretty buff. Not ridiculously over the top like a wrestling figure or anything but I think he'll look great and imposing next to  any Classified series figures you display him with. He blends in perfectly with the Action Force team and really fits the aesthetic of the line. 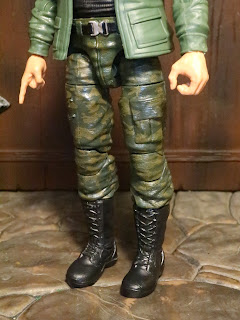 * I do want to take a moment and point out the excellent camouflage pattern of Sgt. Slaughter's pants. They look fantastic with a very realistic looking camo pattern. 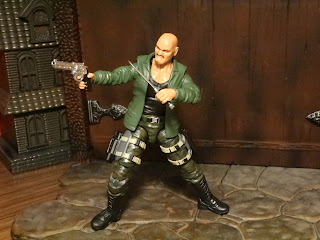 * All of the Action Force figures I've picked up so far are built about the same and they're quite similar to Hasbro figures, particularly the G.I.Joe: Classified Series figures. The number of joints and range of motion is excellent. The joints are rather tight at first, particularly around the knees and elbows, so you'll need to use something like a hairdryer or hot water to loosen them up a bit (my figures came with a flyer detailing how to do this) but it worked well and now they're nice and tight with excellent motion. Like the rest of the group, Sgt. Slaughter has excellent motion, especially in his arms and torso. These are really sturdy, well made figures. 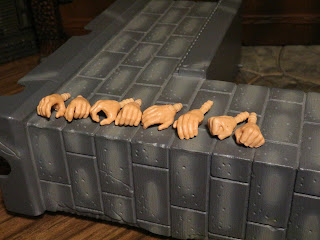 * Sgt. Slaughter comes with eight bare hands that you can swap. The pegs are really thick and sturdy though I needed to use a little heat the first time or two to get them loosened up. There's a pair of standard grips, a pair of pistol grips, a pair of cradling hands for holding a longer weapon, and a pair of fists. 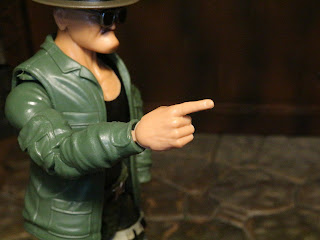 * Sgt. Slaughter also comes with one unique hand as well: A pointing right hand. This is really cool and just fits his personality. You can almost hear his voice yelling when you put this hand on and have him start pointing at your other figures. 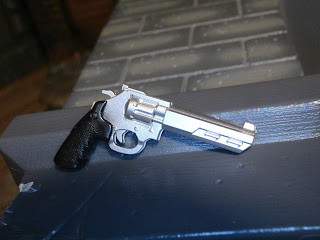 * Sgt. Slaughter doesn't come with as many weapons as the other figures released so far but what he does come with is quite nice. They're both pieces seen in the Prototype Armaments set but now with excellent paintwork. First up is this very slick, heavy duty revolver. This thing is amazing and looks pretty hardcore. Gorgeous, right? 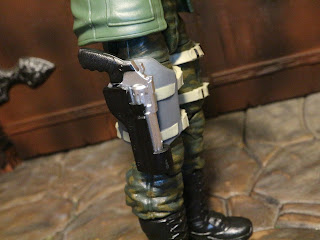 * Sarge also has a molded holster on his right hip that is uniquely molded for his revolver. It fits in there perfectly and looks pretty slick. 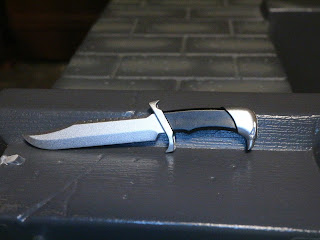 * Slaughter is also carrying a pretty formidable looking knife. That silver blade is pretty impressive looking and the bottom of it actually looks like an eagle. That's a cool detail for a patriotic fellow like Sgt. Slaughter. 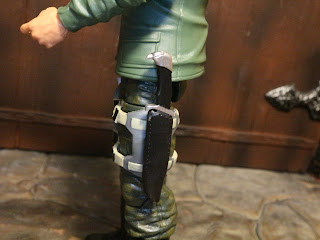 * There's also a sheathe for the knife. It fits perfectly in there, too. 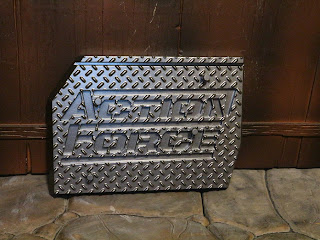 * I'm a huge proponent of action figures coming with display bases and Action Force's might be the best yet. The metal look of the display stand is fantastic and there are four pegs on the base, making it extra versatile. See that little slit at the back? If you want to cut out the file card from Sgt. Slaughter you can even display it behind him. I really hope Valaverse starts offering these for sale by themselves as I'd love to use them for a few other lines. 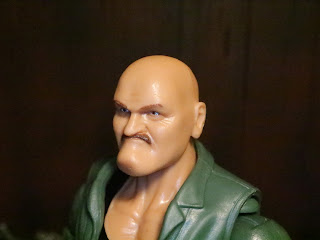 The Negatives:
* OK, so you've probably noticed that I've made it through this entire review without commenting on Sgt. Slaughter's headsculpt. I have to say that I'm just not a fan. For a line that seems to have a fairly realistic aesthetic to it Sgt. Slaughter looks less like the actual wrestler and more like Popeye. OK, that might be a bit extreme, but I'm definitely not liking the portrait as it just seems to caricatured. Yeah, Sarge does jut his lower jaw out, but not quite like this. 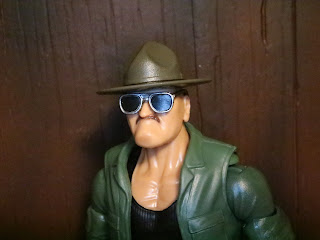 * Sgt. Slaughter wears a classic drill instructor's hat and large, dark shades, and both come with the figure. They're almost impossible to keep on, though. the glasses just don't fit particularly well. The hat can fit on great if you're just displaying him on a shelf but if you move him around to pose it's going to fall off pretty quickly. 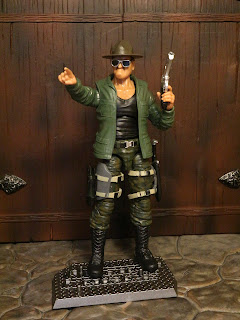 So far I've really been impressed by most of the Action Force figures I've received but Sgt. Slaughter doesn't have me as excited as the rest. He's still a solid figure with a great outfit, cool accessories, and excellent articulation, but the headsculpt just isn't working for me. I really wish that Valaverse had included a portrait with the head and glasses permanently attached and a unmasked portrait rather than the loose fitting items present here. A few more weapons would have been nice, especially considering how well armed the rest of the figures in the line are. I'm still giving Sgt. Slaughter a Good rating, which is about average. While he's the figure that I think has the widest appeal in the line so far he's also the least impressive. It's still cool to have him and an impressive feat for Action Force but I definitely would have liked a less caricatured likeness.
For more of Sgt. Slaughter check out my reviews of Mattel's WWE Elite Collection Hall of Fame Sargent Slaughter (and yes, that's really how the package spelled it) and the M.U.S.C.L.E. Sgt. Slaughter from Super7.
For more Action Force reviews check out the following:
The Bone Collector
Kerak
Prototype Armaments
Posted by Barbecue17 at 2/10/2022