Action Figure Review: Ninjor from Masters of the Universe Origins by Mattel 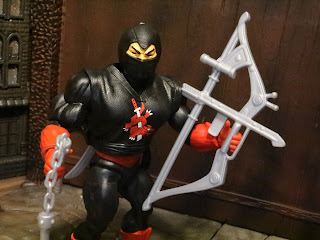 It's time to finally start checking out the fourth series of Masters of the Universe Origins figures and we'll kick things off with the review of a figure I've always wanted in the vintage toyline but never owned: Ninjor! I remember Ninjor as a kid but I never owned him. Out of the quartet of the four limited budget figures from 1987 that David Wolfram worked which have come to be some of the most coveted toys in MOTU collecting (Scareglow, Ninjor, Randor, and Clamp Champ) I only ever owned King Randor and Clamp Champ. Sadly, both of those figures were sold off when I was younger. That really bites, right? On the bright side, Masters of the Universe Origins has already released three of those four figures in the line which is a pretty welcome addition to the line up. Ninjor capitalized on the 1980s ninja craze and has become a cult favorite over the years both due to his cool design and his rarity. There are plenty of collectors who scoff at the idea of a ninja running around in the swords and sorcery/ barbarian fantasy world of MOTU and to them I say: "Go rub a monkey's tummy." Ninjor is awesome.

Let's check out Ninjor after the break... 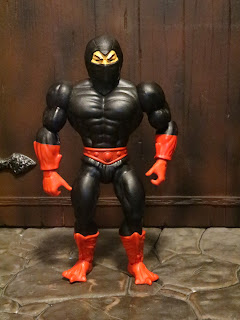 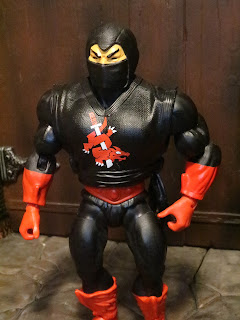 The Positives:
* Black and red look oh so good together and Ninjor wears his outfit well. Seriously, he's a pretty slick looking ninja! Lots of 1980s toylines had ninjas (Rambo had Black Dragon and White Dragon, The Corps had Hiro Yamata, Chuck Norris: Karate Kommandos has Super Ninja, Ninja Serpent, Ninja Warrior, and red Ninja Master, M-Force had The Shadow, G.I. Joe had Snake Eyes and Storm Shadow, Eagle Force had Savitar the Assassin, not to mention the whole lines filled with ninjas like Ninja Assassins by Select, Secret of the Ninja by Remco, Dragon Force Ninja by Lanard, Ninja Warriors by Hasbro, and Teenage Mutant Ninja Turtles by Playmates) so you can't blame Mattel for wanting in on this. Ninjor's tunic is removable (it's plastic and not cloth like the vintage toy) but he just has a standard body under there. The printing on the logo on his tunic is excellent, though. It's super neat and clean! 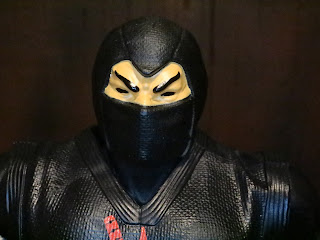 * Ninjor looks ready for action. He has his head almost completely covered and is ready to flip out and kill his foes. Nice! Seriously, his eyebrows are pretty amazing. I do wish he had a removable face mask like the vintage toy but, alas, he does not. 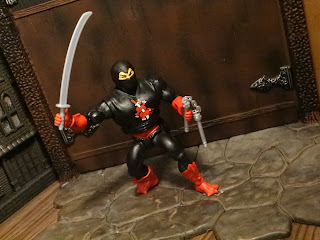 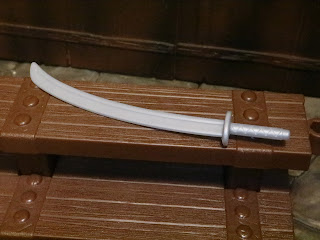 * Ninjor comes with a nice complement of weapons. First up is his katana which looks great with the figure. The vintage Ninjor came with a reused Katana from Jitsu but this sword is new to Ninjor. If Jitsu comes out will he reuse this sword? It's likely! 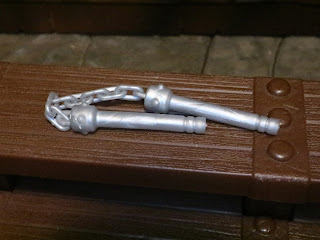 * Second up is a pair of nuchaku. They're pretty cool, too, and they have a functional plastic chain. One of the neat things I should mention about Ninjor is that he has two gripping hands so he can hold two weapons at once or hold his nunchaku in both hands if you want. 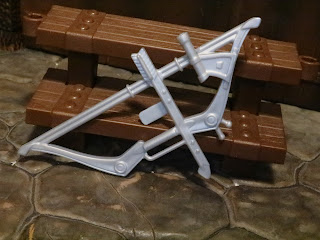 * Thirdly we have Ninjor's cool bow and arrow. The vintage toy reused the weapon from the Eternia playset but this is a completely new sculpt. It's a bit flat sculpt wise but it's pretty cool looking with neat details like the scope and the fletching on the arrow. 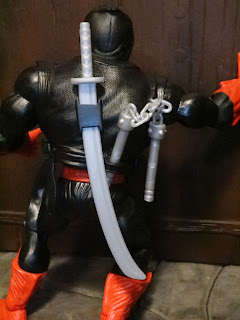 * Guess what? Ninjor can actually tote his weapons around thanks to the built in sheathes on his tunic! There's a small loop on the back right of his belt which can hold his nunchaku and the slot on his back can hold either his katana or his bow. Yes, it holds the bow too! How? Look above at the picture of the bow and you'll see a rectangular tab hanging down from where the arrow sits. That can slide into the same sheathe as the sword. Pretty cool, huh? Ninjor can carry all of his weapons on him while still having a hand free. I love that! 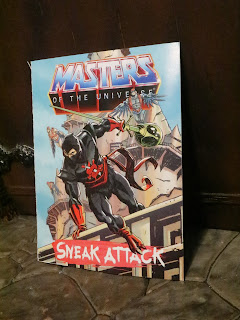 *  The series 4 figures all come with the same minicomic: "Sneak Attack." It's a neat little extra that features the series 4 characters, with Ninjor prominently on the cover. 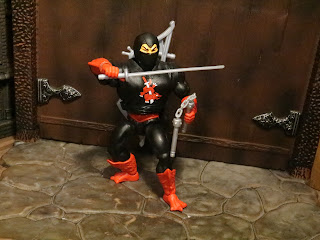 Ninjor is one of my favorite figures in this line. Heck, he quite possibly is my favorite. He's a great figure with excellent weapons and the ability to hold them all. He's just a lot of fun and while he's missing the removable balaclava of the original figure the addition of the sheathe and loop for his weapons definitely makes him seem like a bit of an improvement over the original figurer. Plus, it's a chance to get a vintage styled Ninjor at a reasonable price. He's Epic and one of the standout figures in Masters of the Universe Origins so far.

If you're interested in more of Ninjor check out my review of the Masters of the Universe Classics Ninjor/ Ninja Warrior and the Funko POP! Ninjor #1036.