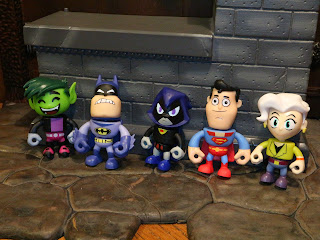 Today I'm showing off another cool toy that appeared under my Christmas Tree: The first of two 5-packs from this summer's film Teen Titans Go! To The Movies. I've watched quite a bit of the show with my daughter and I really dig it so I was excited to see the film. Man, not only is it hilarious but it truly is a love letter to DC Comics. There are far more references to obscure characters and events in Teen Titans Go! To The Movies than in the entire DCEU combined. I mean, the Challengers of the Unknown make an appearance. Multiples, actually. And Stan Lee! Multiple times! This movie is worth watching, folks. Mattel put out these five packs of minifigures for the film's release but I don't think they really ever hit shelves until stores like 5 Below started getting them. Toys R Us was pretty much the only store that carried the Teen Titans stuff and since they went out over the summer these really didn't get a retail outlet. I dig anything DC Comics and minfigures, so I figured these would be a hit for me. I'm kind of mixed on them, to be honest, but let's check them our more closely after the break to get a better idea of why I'm kind of mixed on them. 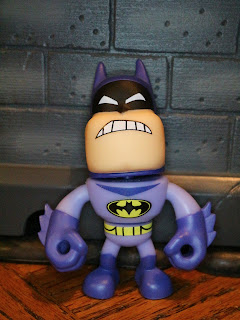 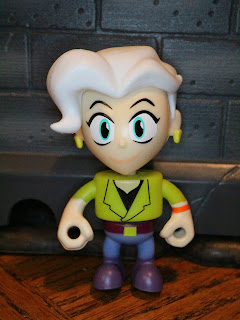 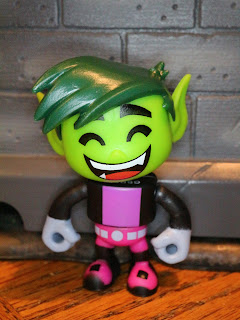 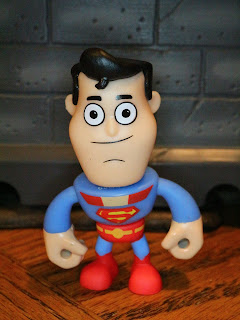 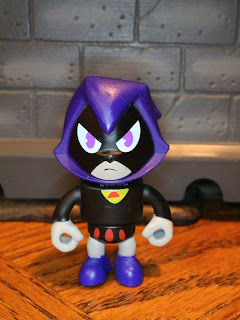 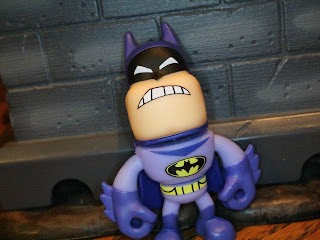 * Since these are based on the Teen Titans Go! style, obviously you're going to get some pretty exaggerated looks for these figures. I love Batman's massive lantern jaw, his grim expression, and the detail on his costumes. Whilese these figures mostly use just a few standard bodies, the paintwork is neat and clean. Of course, Batman also has the spikes on his gloves, and they're nice and straight. Just for fun, Jimmy Kimmel voices Batman in the film. Will Arnett's in the movie, too, but he voices Deathstroke! 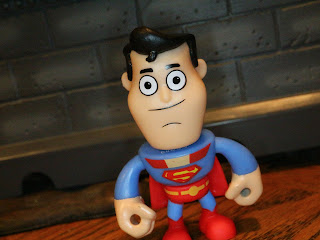 * Just to get an idea of how awesome TTG!TTM is, guess who voices Superman? Nicholas Cage. Nicholas Cage! Yes, the man who could have (should have?) been Superman finally gets a go at the role. Superman has a kind of goofy look to him, playing up the classic, All American, boy scout nature of the character. He's as classic a Supes as you could imagine with a very stylized head and big googly eyes. 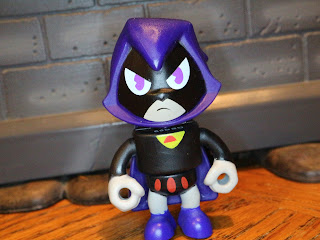 * Next up is Raven! Voiced by Tara Strong (probably one of the most recognizable voice actors out there) Raven perfectly matches her onscreen counterpart. The Teen Titans Go! version of Raven is a bit frumpy and perpetually annoyed, which this figure captures well. I like the hood and the "I really don't want to be here" look on her face. 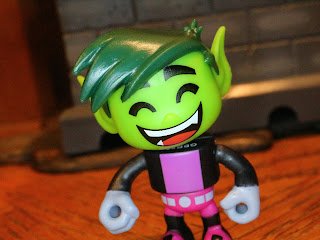 * My favorite member of the Teen Titans Go! roster is Beast Boy and Greg Cipes really brings the character's delightfully fun personality to life. I love this Beast Boy! He's mid laugh with his sharp teeth exposed and just looks like he's having a blast! 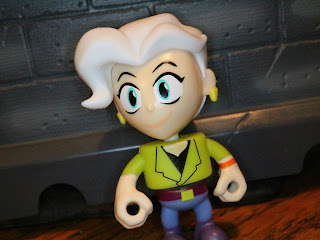 Last up is Jade Wilson, one of the "new" characters for the film. Voiced by Kristen Bell, I really thought this was going to turn out to be Rose Wilson, AKA Ravager, but it turns out that this is actually Slade Wilson/ Deathstroke in disguise! Crazy, right? She (he?) looks like the film character and is a fun inclusion for fans of the film. 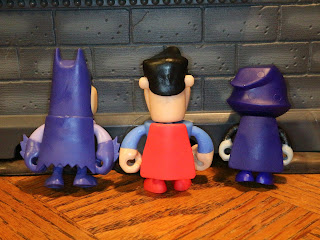 * Batman, Superman, and Raven all come with removable capes. All of the figures have holes on their backs to hold capes so you can swap the capes around if you like. 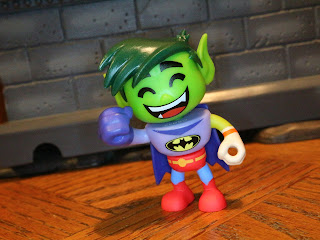 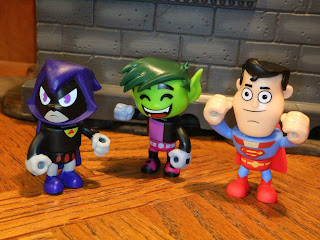 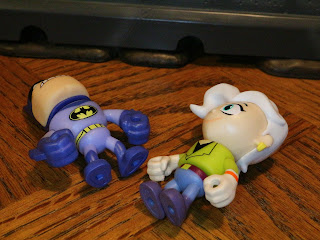 * I cannot get Batman and Jade Wilson to stand up for the life of me. It's pretty important that minfigures be able to stand, so this is kind of a blow. 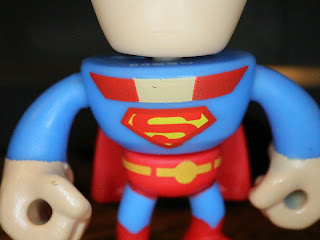 * I just find it odd that Superman's cape and chest are painted on the front of the torso like this. It just looks odd, doesn't it? 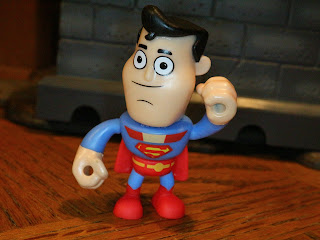 * The figures all feel a bit rubbery. I actually purchased one of the blind bagged Teen Titans Go! figures over the summer and I felt the same way. I wish the plastic was a bit firmer and less wiggly feeling, especially at the joints. 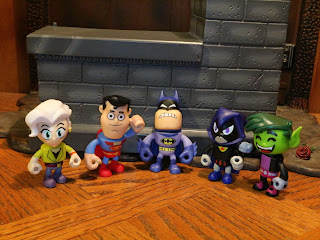 I'm not the biggest fan of the construction of these but I do love the design as it matches the source material quite well. They're fun and colorful and compatible with previous Teen Titans Go! minfigures from Mattel. Still, getting five figures in the pack is a pretty solid deal (especially if you get these on the cheap at somewhere like 5 Below) and makes for a Good and a 1/2 set. The Teen Titans and the DC Comics Trinity are split over two packs so to complete either team you'll need to purchase both sets. Not bad overall. It's definitely kind of sad that these didn't get a wider release, though.

I've reviewed so many Batman figures that he has his own review archive. For more Batman reviews check out The Dark Knight Gallery!

Beast Boy hasn't gotten a lot of action figure love lately so the only other one I've reviewed is the DC Super Hero Girls Beast Boy from the action collection 6-pack.