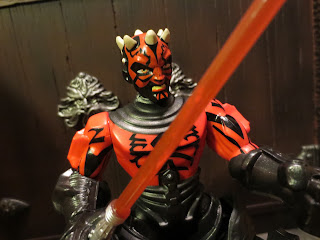 It's not very often that I'm truly surprised to stumble upon a toy at retail. For most lines that I collect I know months in advance exactly what's coming out and when. This Darth Maul, however, surprised me. If you've been my reviews of the Star Wars Hero Mashers figures, you know that while I like these it's actually my little 2 year old who loves them. She's nuts about them and I've been picking them all up for her. We found series 2 near the beginning of November which prompted me to do a little Google searching for any hint of an upcoming Star Wars Hero Mashers series 3. Interestingly, when I searched this guy popped up. I'm a huge fan of Darth Maul and I love this look for him from Clone Wars! Not only was this figure a surprise to me but he was in stock on Amazon for around $11 shipped. A couple of days later he showed up and I was able to present him to my little one. We've been having a blast with him! Read more about him after the break... 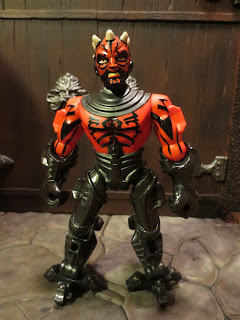 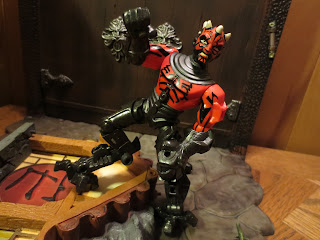 *These guys aren't the most well articulated figures out there but they are fun, durable, and great to play around with. The mashing feature is fun to. While we have already had made a robo-Darth Maul using General Grievous' legs a few times, this guy is streets ahead of our creation! Of course, you can also throw the original Darth Maul legs on here and have a training Darth Maul (like the old Hasbro Power of the Jedi version). 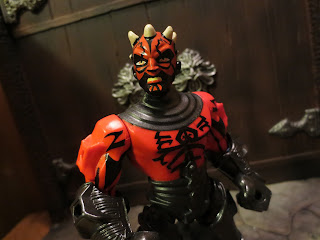 * The sculpt is great on this figure and the paintwork is neat and clean. The tattoos look excellent; this is actually a pretty intimidating looking figure for still being presented in a stylized manner. The head seems to be different from the first version or Darth Maul. The horns seem a bit longer and the face looks a bit more pissed off. 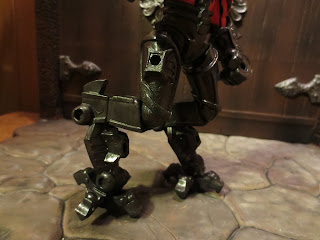 * Maul's robotic legs are really well done. What's interesting is that they actually attach to the knee peg when it's completely facing behind the figure, giving them a curved, goat-like look. Mixing these in with Maul's red and black body and long horns definitely gives him a more devilish appearance than his previous figure. This was an excellent design job from Hasbro! 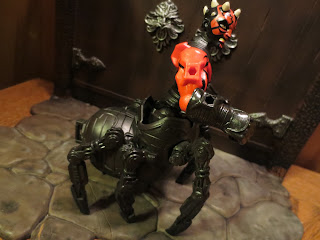 * The coolest part of this figure is that Maul comes with a robotic lower spider body that replicates his appearance during his years of exile on Lotho Minor. The spider body is a hinged piece that fits over Maul's thighs and plugs into the portholes (you need to remove his lower legs). It looks really good and is actually a variant we haven't seen in any other Star Wars action figure line yet so far as I am aware. 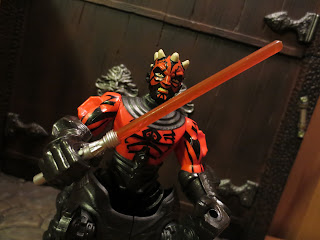 *Darth Maul comes armed with half of his double bladed lightsaber, meaning it just looks like a regular lightsaber. It's not executed any differently from other lightsabers in the line but it's a nice extra that makes the figure feel more complete. 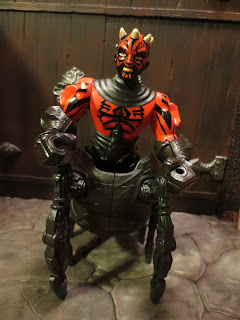 *The only negative I have with this figure is that there is a bit of a gap between the spider body and the torso. Even though I wouldn't hold this line to the same standard as The Black Series, I do wish it had been executed a bit more tightly. Of course, maybe this makes it easier for a more diverse range of characters in this line to take advantage of having spider legs. 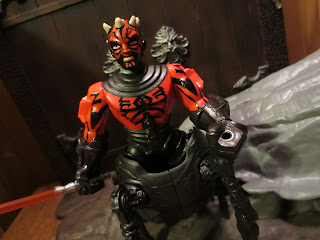 This guy isn't just a good Hero Mashers figure; he's quite possibly one of the coolest Star Wars figures we've seen released this year by Hasbro. One of the things that I've really lamented about the change in the collecting climate of Star Wars is that the final seasons of the Clone Wars and Rebels just aren't getting that much attention when it comes to toys. While a robotic legged Maul was released in a three pack (I own it), we never got the spider body. That's why it's so cool to see it here! This is another Epic figure in this line. I know most Star Wars collectors are ignoring these, but I'd strongly advise against it! These are some really cool toys with a diverse character range (not an Obi-Wan, Slave Leia, or Clone Trooper in sight!).