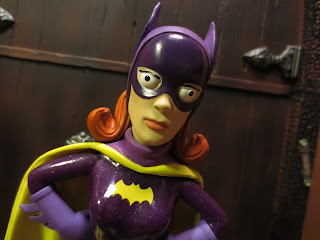 One of the interesting things about collecting almost everything related to a specific character is that you run across some really interesting things. I've picked up quite a range of not just action figures but also Batgirl statues, dolls, vinyl figures, salt and pepper shakers, and even smart phone covers, and it's fun to see the variety of product available. Unfortunately, sometimes collecting almost everything based on a specific character means you end up with some real stinkers as well, which is perhaps the most polite way I can summarize the subject of today's review: The Vinyl Idolz 1966 Batgirl from Vinyl Sugar. This product is so flawed that not only am I already dumping on it in the first paragraph of the review but I'm actually going to change the format of the review. Usually I cover the positives aspects of a product first and then go over the negative aspects. Today I'm flipping that around because I don't even have much positive to say. Ready for a closer look? Then join me after the break... 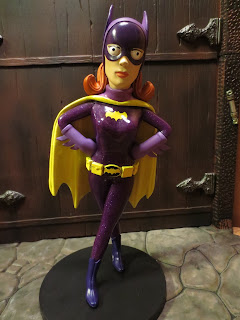 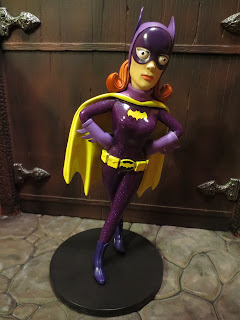 *Despite everything else I don't like about this figure, the biggest problem here is that it just doesn't function properly. Seriously, what is the one thing that a non-articulated statue needs to be able to do? Did you say stand up? Bingo. That's it. If a statue can stand up properly it is already a functional as it needs to be. The Vinyl Idolz Batgirl cannot stand up. As you can see in this picture, she has the tendency to lean over t her left. She's not permanently affixed to her base, but she almost should be. Still, her legs are molded incorrectly or something as she just looks wilted. I own dozens of statues (vinyl, PVC, polystone, and resin) and this might be the first one that just will not stand. Go home Batgirl, you're drunk! 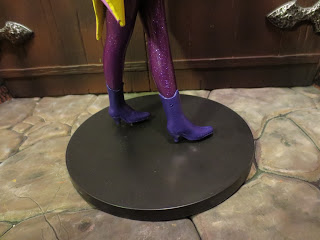 * The stand is a separate plain black disk with two differently sized pegs on it. As you can probably tell from above, it doesn't work at all. While the major fault here lies in the statue's wonky legs which are inexplicably warped, the stand doesn't seem like it was well thought out for the character, either. It probably should have been a permanent piece rather than a removable one. Getting foot pegs to function with a thin character in high heels is always a real challenge. 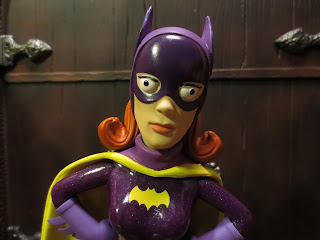 * I'm going to let Hank Hill summarize my reaction when I first saw this figure. Yeah, this is a pretty terrifying looking figure. I know it was the 1960s, so maybe this is what Batgirl would have looked like in an episode where Batman tripped out on LSD with the Beatles or something. I know this line has a particular style and it works on some characters but here, with the expressionless face? Nope. This is flat out, bug-eyed, soul crushing nightmare fuel! 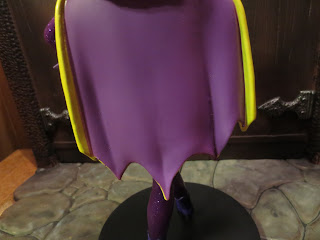 * This is definitely the least of the statue's problems but I will point out that the edges of the cape are a bit messy. A number of figures and statues have this problem, so it's not unique, but it's always a bit disappointing. 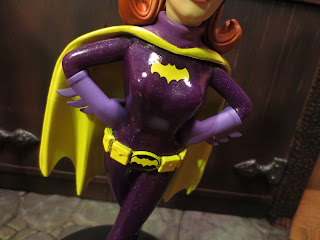 *If you're just looking at this figure below the neck, it actually looks pretty nice. While the face is heavily caricatured, the body is normal and seems quite proportional. Vinyl Sugar did a nice job of capturing Yvonne Craig's Batgirl build and in selecting a pose that is immediately recognizable as her particular interpretation of the character. 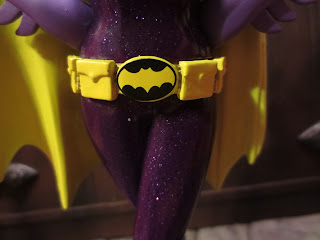 * Another positive aspect of this figure is that the paintwork and the glittery appearance of the suit are quite nicely done. The yellow paintwork belt and the bat-symbol on Batgirl's chest are both neat and clean, which is always nice to see. The glittery plastic of her bodysuit looks great here. It really adds something to this figure, although it's a shame that the head is so awful and that the figure can't stand. 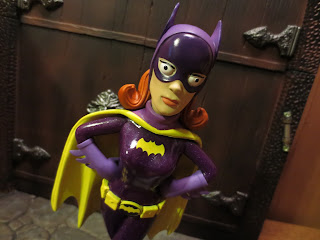 This figure has a terrifying gaze and it can't stand up right. This figure earns from me the unenviable rating of Crap and a 1/2. I have plenty of stylized Batgirl figures in my collection but this one goes beyond being stylized. Honestly, this feels like something my wife would use in some sort of bizarre Batgirl aversion therapy to try and halt my collecting. I loved Vinyl Sugar's beautiful Vinyl Vixens Batgirl released earlier this year, but this? This is like the complete opposite end of the spectrum from that.


I'm starting to amass a nice little collection of Batgirl products based off of Yvonne Craig's appearance in the 1966 Batman television series, including:

I've reviewed plenty of other Batgirl collectibles, including: