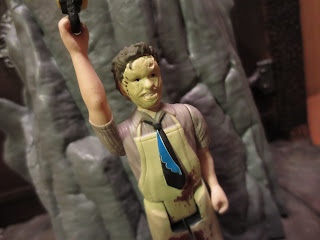 The figures that originally really got me into Funko's ReAction range of figures were the Universal Monsters and the ReAction Horror Series. There was just something about having a wide variety of classic movie monsters in the charming faux-Kenner format that was insanely appealing to me and I really jumped on board with the line. While my passion for it has somewhat dwindled over the past year due to some questionable licenses and a lack of follow up series for seemingly successful lines like Universal Monsters and the Horror Series, I was really looking forward to Leatherface. Interestingly, Leatherface is not part of the catch all ReAction Horror Series like his fellow cinematic slashers; he's actually sold directly under the Texas Chainsaw Massacre name (this was apparently a request by the license holder). While we've already had the excellent NECA Ultimate Leatherface released this year, Funko's ReAction Leatherface is a completely different take on the same character. Ready for a closer look? Then join me after the break... 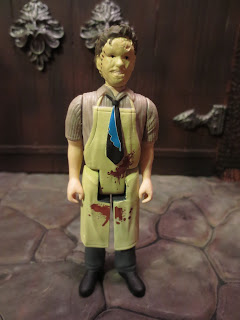 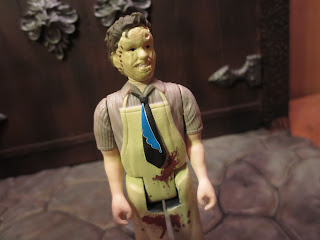 *When I look at the ReAction figures, I always ask myself two questions: "Can I tell who the character is supposed to be?" and "Does this look like a figure Kenner might have released during or shortly after their Star Wars era?" My answer to both questions is a yes! Leatherface has some nice detail such as his wrinkly mask, messy hair, and signature apron and tie, but he still manages to look simple in that nostalgic Kenner way. He's a decent look figure for a guy wearing a mask made of human flesh. 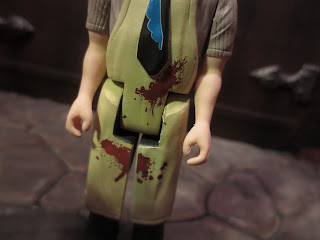 * The paintwork is nice as Funko has accurately captured Leatherface's tie and leathery face mask. They've also given him a nice spattering of blood across his apron. This is a great little detail that adds so much to this simple figure. It's a fun detail that feels natural but that you know absolutely would not have been on a vintage Kenner figure. 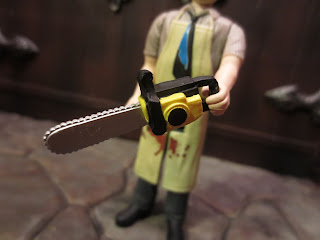 * Is it even legal to make a Leatheface figure that doesn't include his chainsaw? Of course not! Fortunately, Funko has included a nice chainsaw that Leatherface can wield in either hand (but not both). It has a nice amount of paint applications on it and, while it's a soft sculpt, it looks pretty nice. 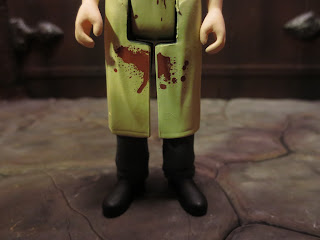 * Unfortunately, the two sides of Leatherface's apron hanging down do not sit together flush, giving him that bizarre split leg. While we've seen few ReAction figures this year who have nailed this type of look (Gracie Law and Lo Pan come to mind), Leatherface seems to revisit one of the problems seen on the 2014 figures. 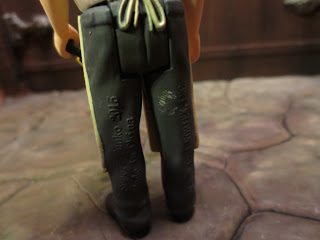 * Not a major problem but there is a weird smudge on the back of Leatherface's pants. It looks like a paint smudge fingerprint to me. 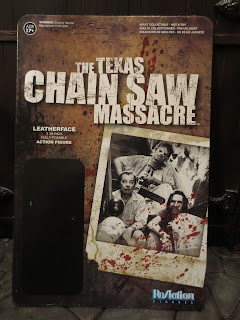 * I really do like the backer card that Funko used for this line. It perfectly captures the grimy feeling of the property by using using an old black and white Polaroid covered with blood. I did, however, have the problem that the blister pack just fell right off the backer card. That's a first for me so far as ReAction figures go. Seriously, this came in a nicely packaged box and at first I thought all I received was the backer card. Make sure that if you're a mint on card collector you check your figure closely before buying. 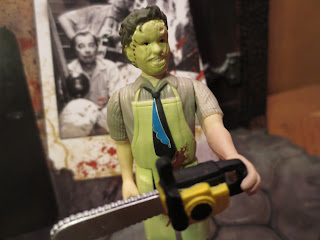 I've been hoping that Funko would jump back in and release a few more horror icons in the ReAction series but, if we never get anyone else, I feel that the inclusion of Leatherface at last completes the main four movie slashers (Leatherface, Michael Myers, Jason Voorhees, and Freddy Krueger) in this scale. Sadly we've lost actor Gunnar Hansen this year, but it's nice that Funko and NECA have released some good figures to pay tribute to his most iconic character. This is a Good and a 1/2 figure and a great addition to the ReAction horror offerings.

I've reviewed plenty of other ReAction figures, including: