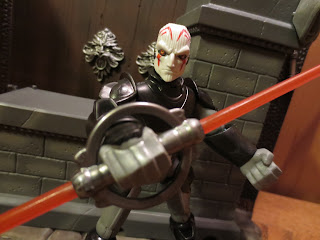 I'm really glad to see the cast of Rebels get some love in the Star Wars Hero Mashers line! While we're all definitely excited about Star Wars: The Force Awakens and counting down the days until it's release, Rebels has been a great series so far and is a really fun show but I kind of feel like it's gotten lost in the shuffle of the upcoming film. Hopefully since Hasbro is including Rebels figures in this line it means they think that kids are really gravitating to these characters. While I'm awaiting the appearance of the Rebels cast in the Black Series, I'm also hoping that Hasbro will finish the Rebels cast in the Mashers series, too. While he's not one of the Ghost crew, the Iniquistor is a pretty significant character in season 1. How does he fare in the Hero Mashers line? Find out after the break... 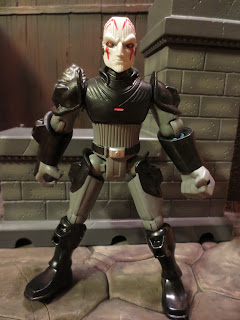 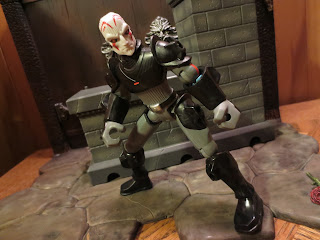 * The Hero Mashers figures are really fun to play with. The articulation is pretty good (although I still wish these guys had swivel/hinge shoulders instead of just swivels) and they're very sturdy. My 2 year old just loves playing with these and they hold up to her pretty well, so that's an endorsement. 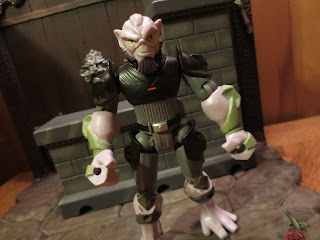 * I don't make the most of the mashing feature as I tend to keep my figures the way they are but my two year old finds the mashing comedic. Want to give Zeb a new set of armor after he beats up the Inquisitor? Have at it! The figure splits apart at the knees, hips, elbows, and head. 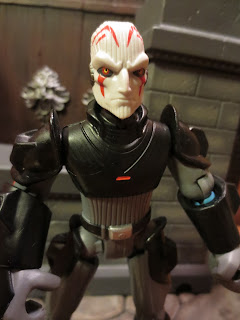 * The Inquisitor might have one of the best sculpts of any figure in this line. He's just such an intimidating looking character! It's interesting that in this line, where the design aesthetic makes the characters look a bit more friendly, that the Inquisitor remains so creepy. The head sculpt is incredible and the paint work is fantastic. Check out those eyes! Terrifying! His armor is also extremely faithfully represented here. 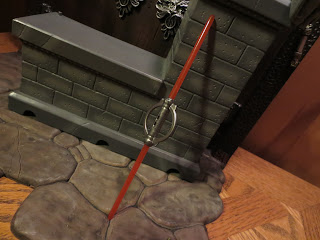 * I like the Inquisitor's lightsaber. The unwritten rule of Star Wars is that every new Sith/ Dark Jedi/ Darksider has to have a new lightsaber type that one ups everyone else. Vader's saber was red. Darth Maul's was double bladed. Asajj Ventress dual wielded. Grievous quad wielded. The Iniquistor gets a double bladed lightsaber that  can spin. This one doesn't spin (it's one solid piece) but it looks great and it a fun, fitting accessory for the character. 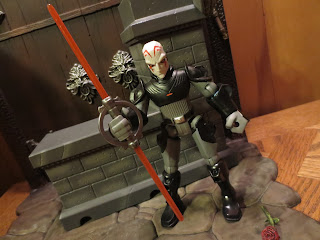 * The lightsaber is cooled but it's tough to get it into the Inquisitor's right hand. The handle is a bit large. I also wish that there was a peg on the handle somewhere so that it could be stores on the Inquisitor's back. The peg and port system just doesn't get utilized enough in this line! 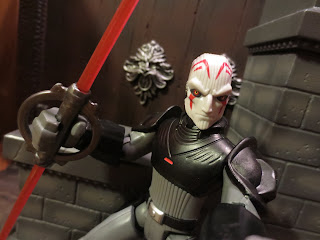 This guy is really a pretty nice figure! I know that a lot of Star Wars fans have been pretty dismissive of all of these extra lines that Hasbro has been releasing lately that seem to be taking the place of the classic 1/18th scale and collector focused Black Series figures but, for Star Wars fans who enjoy something a bit different, these are really cool. This is a great representation of the Inquisitor and a Great and a 1/2 figure in this series. Check him out and help show support for more Rebels characters in the various Star Wars toylines!


I've reviewed one other figure of the Inquisitor from the insanely difficult to find Star Wars: Rebels line.