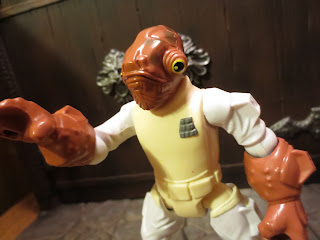 Two things: First, I love Admiral Ackbar. He might be my favorite Star Wars character (he's probably tied with Boba Fett). He's just so bizarrely awesome and he seems to capture everything I like about Star Wars. I've loved Admiral Ackbar for many years now and I was thrilled that he appeared in series 2 of the Star Wars Hero Mashers basic figures. Secondly, this figure and the rest of the series 2 Hero Mashers will be forever special to me because my little daughter spotted these during a toy run we went on together. If you remember back around Force Friday, I bought the entire series of Star Wars Hero Mashers so that her and I could play with them together. She really has taken to them and while she's still a bit too young to play with them unsupervised (the heads are a bit small when removed) we've had a great time with them so far. She always asks to play with them and we either set them up so she can knock them down with a giant Incredible Hulk playground ball or have wrestling matches with them. My wife was out with a friend for the day and so me and my little sidekick decided to go on an epic toy run. At our second stop, a Wal-Mart, we were checking out the action figures. My little one likes to look at the Hero Mashers and name all of the characters we have. As she was naming them, suddenly she stopped, got really excited, and exclaimed, "Different toys!" Sure enough most of wave 2 was in stock. We grabbed everyone new we could find. She was pumped and so was I because this was her first successful toy run! Way to go, Sweetie Bee! Ready for a closer look at my little one's newest score? Then join me after the break... 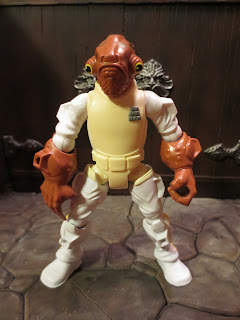 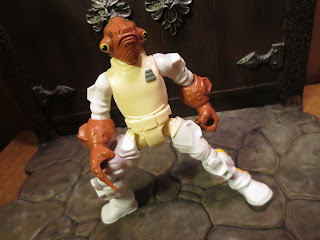 * While I still lament the fact that these figures don't have swivel/hinge shoulders, it doesn't seem like Hasbro will be changing that anytime soon. The articulation here is pretty nice, though, and I definitely feel like these are good, sturdy toys. My two-year old loves to play with these and they hold up really well. She truly is more fascinated by these more than any of her toys, with the exception of her stuffed animals. Those guys always win out! 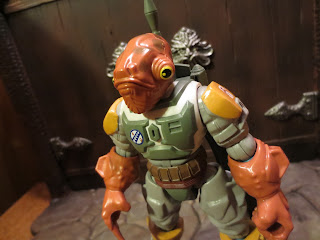 * As I've been playing with these with my little one I've definitely been getting the chance to experience mashing them together with other figures. I'm the type who might do something sensible like putting Han Solo's head on a Stormtrooper body or Luke's head on Anakin's Jedi robes. My little one is the kind to put Zeb's feet on Bossk or the Emperor's head on Yoda's body. While playing around, though, I have created Ackboba Fettbar. Seriously, I'd watch a whole movie about Admiral Ackbar fighting the Empire while wearing Mandalorian armor. 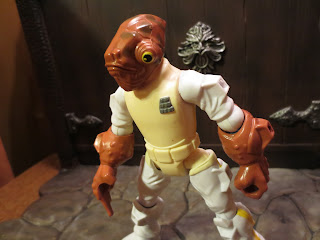 * Admiral Gial Ackbar is one of the most memorable secondary characters from the entire Star Wars Universe and Hasbro did a great job of capturing him in the more simplistic, exaggerated style of this line. I love the texture on his crustacean inspired arms and the subtle paint work on his head. Despite being a toy for the kids, this is a beautiful Admiral Ackbar figure. 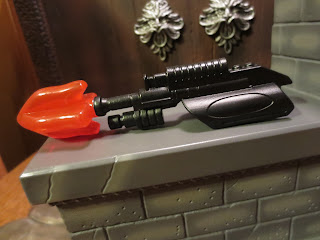 * Take a second and look at Admiral Ackbar's accessory: Recognize it? Check this out for a memory job! Yup, that's the Comlink blaster from the Power of the Force II Admiral Ackbar! So far as I know that weapon was created just for the line (it was actually a modification of a blaster rifle that was created as the secondary weapon for the POTFII Greedo) so it's really cool to see Hasbro throw this little Easter egg out there for the fans of that line. 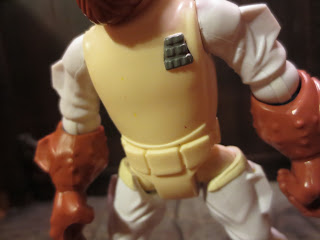 * If you look closely on Admiral Ackbar's clean, pressed military uniform, there are actually a number of bizarre paint stains. I'll admit, it is tough to see in the picture, but it's there. Not sure what caused it as this is one solid color here. 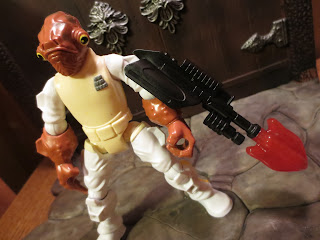 * I love the over the arm blaster Admiral Ackbar comes with but I will say that it's tough to position on his arm with the little "port hole" wedges. This is designed to attach to one of the ports on his shoulders but it gets caught up on the forearm ports. Glad to see those ports finally having a purpose, though. Still, this could have been a bit better thought out. 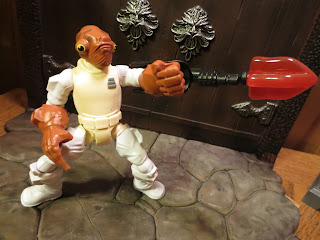 I'm incredibly glad that Admiral Ackbar is scheduled to appear in The Force Awakens. Ack definitely should have a moment or two to shine again. I am also quite glad that Hasbro managed to get an all new toy of the Admiral out on store shelves prior to the release of the new film. While I'm waiting for an  Admiral Ackbar in the 6 inch Star Wars Black line, putting out this Great figure is still appreciated!
!

Oh, and read the first letters in each word of that last paragraph! Bet you weren't expecting that!


I haven't reviewed any other Admiral Ackbar figures on Action Figure Barbecue but I have reviewed plenty of the Star Wars Hero Mashers: