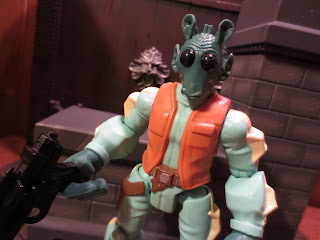 As we are all counting down to the release of Star Wars: The Force Awakens, here's another review of a classic trilogy character that has been introduced into the Star Wars Hero Mashers line. As part of the new series 2 of these figures, Greedo is a character who Star Wars fans love despite having little screen time (in the movies, anyway; he was on Clone Wars a bit more). I love how Star Wars characters who have such scant screen get treated like flipping royalty among Star Wars fans. I'm thrilled that we're still getting action figures of Greedo, despite him being a character who gets shot and killed about a minute after he is introduced. That's what I love about Star Wars. Anyways, ready for a closer look at Greedo? Then join me after the break... 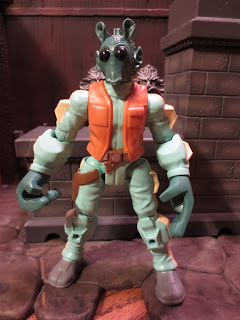 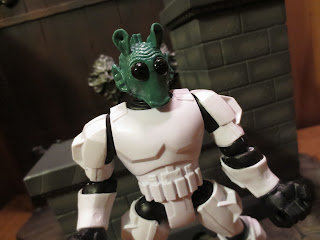 * The mashing aspect of these figures is really quite fun. Me and my 2 year old have been having a blast making new variations. Ever wanted to see Greedo in Stormtrooper armor? Here you go! Or he can be a generic Rodian Stormtrooper. Your choice! 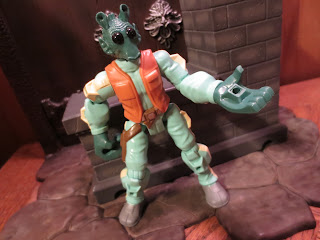 * I've reviewed a number of these figures and I'm always impressed by the durability. I've mentioned that while I like these, I really have been picking them up because my 2 year old loves them. She was with me when I found most of series 2 and she spotted them first. Suffice it to say that these are great toys and they've survived the play of a 2-year old thus far (with parental supervision, of course). 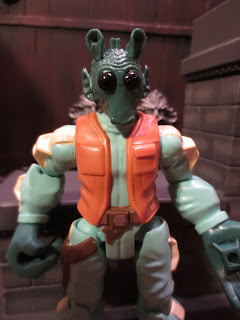 * Greedo looks like....well, Greedo. Seriously, Hasbro has done a nice job on translating the winner of the "Bounty hunter with the worst aim award" into this more simplified style. Greedo's head sculpt is nicely detailed while his outfit is far more simple. He still has all of the little padded stripes on the sides of the sleeves and legs, however. He's not the Star Wars Black Greedo by any stretch of the imagination but he's great for a more traditional "toyified" version of the character. 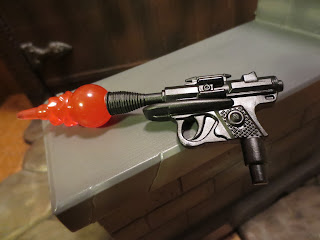 * Greedo comes with an exaggerated depiction of the DT-12 Heavy Blaster pistol he menaces Han Solo with (and possibly gets off a shot with, although my memory is always fuzzy on that detail) and it's a cool looking accessory that features a translucent muzzle effect. This weapon really reminds me of an accessory from the Power of the Force II line or the accompanying 12 inch figure line. That's a good thing, by the way. I still revere those figures! 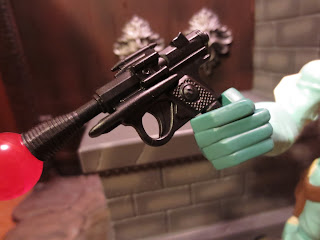 * One thing I complained about with these figures back in the first series that I still haven't made peace with is that they really don't take advantage of the pegs on the accessories and the portholes on the figures. Greedo's blaster only has a peg on the bottom, not on the side, thus there's no way to "holster" it. He also only has one gripping hand and the blaster doesn't fit into it too terribly well. It'll fit, but be prepared for it to fall out over time. 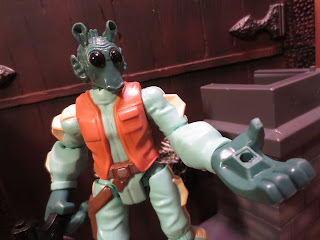 I'm really enjoying collecting this line as it's something that me and my 2 year old are doing together. Greedo is a character that I always find hard to resist picking up in action figure form and this is another good representation of the character. I do wish the hands were set up a bit better to hold the blaster but that's not a deal breaker for me. In the end, I'd give Greedo a Good and a 1/2 rating. He's fun, colorful, and a great subject for an object lesson when you're teaching your kids about the Han and Greedo controversy in A New Hope!


I reviewed the Star Wars: The Black Series Greedo when it was released in late 2013.

I've reviewed a number of these other Star Wars Hero Mashers figures, including: