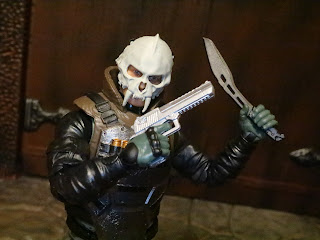 It's time for the first new review of a 2022 product and I'm kicking things off with a look at the Bone Collector from Valaverse's Action Force line. I do think some folks got their Kickstarter orders in late December but since Valaverse didn't officially put these figures up for sale until early January 2022 and most e-tailers haven't gotten their orders yet, I'm counting them for this year. Action Force is a 6 -7 inch scaled military line that is obviously going to draw comparisons with Hasbro's G.I.Joe: Classified Series. That's not a bad comparison and I honestly started picking these up to supplement my Classified collection. This is an ambitious line, especially for a new company, and it seems that so far they've been quite a hit with collectors. Action Force is centered around the aftermath of a possibly engineered second American Civil War where individual state are now their own Republics who must contest with a growing threat called New Colonia, a growing collective violently protected by an army called the Garrison, led by Kerak. The Bone Collector works for Kerak but seems to be an independent operator who has his own small faction, the Brothers of Bones. He's a chilling figure that works within the fiction of Action Force but could also serve great as a supplement to the forces of Cobra or as a Dreadnok operator. He's part of the first series of figures in Action Force and is one of the standard releases in the line. Let's check him out after the break... 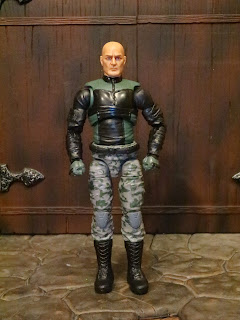 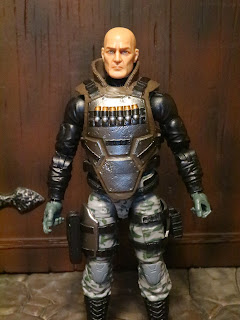 The Positives:
* The Action Force figures overall offer up some fairly realistic military styled figures. They do have some more sci-fi elements with figures like the SWARM Troopers but overall they look like fairly modern troops and special forces operators as you would see in a move or video game series like Call of Duty. Bone Collector is wearing camo pants, a tactical sweater, and a pretty sizeable piece of heavy body armor. The sculpt is excellent with plenty of wrinkles, textures on the materials, pockets, and lots of dings and dents on the body armor. There's even some rounds across the chest for the underslung grenade launcher on the Bone Collector's rifle. The paint is solid, too and everything is neat and clean. This is an incredible looking figure and definitely looks and feels like a very quality release. 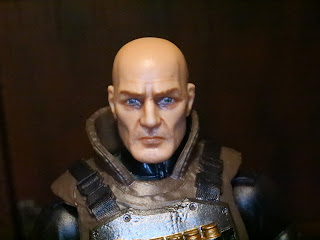 * Bone Collector's headsculpt is excellent. The paintwork is excellent and there's so much character here. He kind of looks like a bit more haggard and aged Jason Statham, doesn't he? 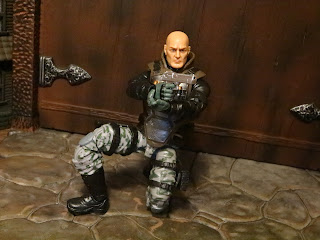 * Bone Collector and all of the other Action Force figures I've picked up so far (I've got more reviews coming) are really built like Hasbro figures, particularly G.I.Joe: Classified Series figures. The number of joints and range of motion is excellent. The joints are rather tight at first, particularly around the knees and elbows, so you'll need to use something like a hairdryer or hot water to loosen them up a bit (my figures came with a flyer detailing how to do this) but it worked well and now they're nice and tight with excellent motion. 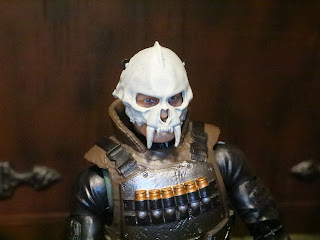 * Bone Collector definitely shows off his villainous side by wearing a weird skull helmet with fangs. What kind of skull is this exactly. Does anyone know? It's a really cool design that fits him perfectly. There are straps in the back that help hold it on and a but of a wash on the skull to bring out some of the details. Team him up with the Master of Disguise Zartan and let them rock their skull masks as a terrifying team-up. 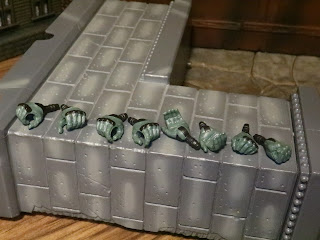 * Bone Collector comes with eight gloved hands that you can swap out. The pegs are really thick and sturdy though I needed to use a little heat the first time to get them loosened up. There's a pair of standard grips, a pair of pistol grips, a pair of cradling hands for holding the barrel of a rifle, and a pair of fists. 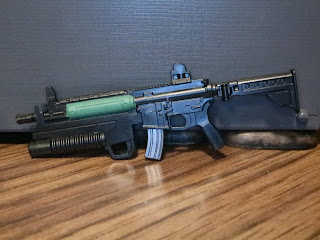 * We've seen Bone Collector's weapons before in the Prototype Armaments set but now they all have some paint apps that really improve their appearance. First up is what appears to be a take on an HK416 with an under the barrel 40mm grenade launcher. The weapon looks really good with Bone Collector and gives him something to use with the 40mm rounds on his chest. The magazine is silver and the grip on the barrel has a green paint hit. 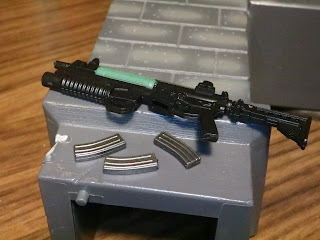 * The rifle not only has a removable magazine but it comes with two additional magazines as well. That's pretty cool! the magazine stays in the weapon snugly and secure, too, so no fear of losing it. 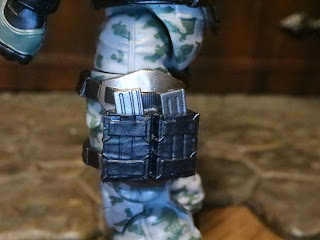 * On his left hip the Bone Collector carries a removable pouch that can store both of the extra magazines for his rifle. They actually fit very securely and it makes for a really cool way to hold these extra items. 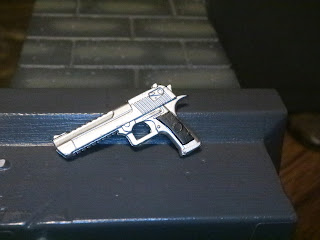 * Another weapon which we've also seen in the Prototype Armaments set is this Desert Eagle, a pretty powerful 50 caliber pistol. This time it's cast in a wonderful silver plastic with a bit of black on the grip. The detail is excellent here and the barrel is hollow to take a muzzle flare effect from one of the accessory kits. 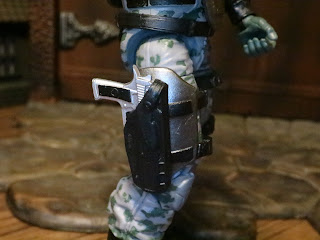 * To keep his pistol close at hand the Bone Collector has it stored in a molded holster on his right hip. It's a removable piece as well but in stays in place quite well. The pistol also fits in firmly. 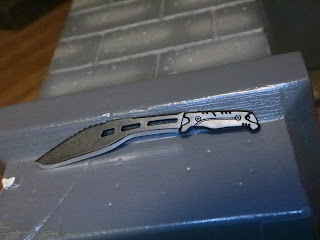 * For even closer encounters Bone Collector can whip out his kukri. It's a very modern looking kukri with lots of details, some cut outs in the blade, and a silver paint app on the edge of the blade. 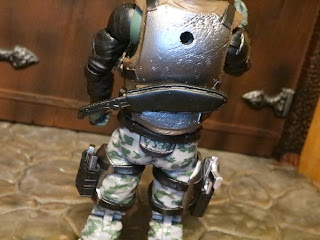 * There's a sheathe attached to the back of Bone Collector's armor and his kukri slips right inside. I love how he can carry all of his gear while having his hands free for the rifle. It's a fantastically well thought out setup. 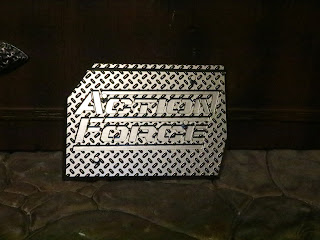 * I'm a huge proponent of action figures coming with display bases and Action Force's might be the best yet. The metal look of the display stand it fantastic and there are four pegs on the base, making it extra versatile. See that little slit at the back? If you want to cut out the file card from Bone Collector you can even display it behind him. I really hope Valaverse starts offering these for sale by themselves as I'd love to use them for many a few other lines. 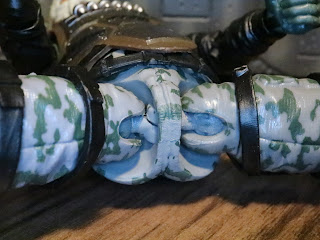 The Negatives:
* My only complaint with Bone Collector is that I'm not a fan of the "drop down hips." I haven't had any issues with mine so far but sometimes when posing mine I hear a weird noise I just don't like. I've tried heating things and everything seems OK, but it's just a design I'm not loving. It's the only part of the figure that doesn't seem incredibly sturdy. 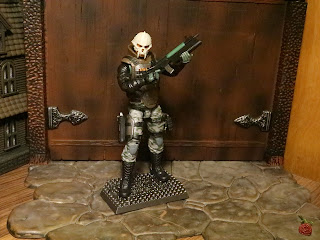 The Bone Collector is a really cool figure. He has a very cool, tactical look plus that skull mask which really adds a unique something special to his appearance. His kit is fantastic, too, with lots of really nice, painted accessories. Overall, I like the articulation, too. Bone Collector is a very fun figure and he looks incredible in a variety of poses or on display alongside other villains. Valaverse has impressed me with their first releases and I plan on reviewing more of the first series figures in the week or so ahead. The Bone Collector gets a Great and a 1/2 rating from me.
This is the first figure of the Bone Collector I've reviewed.
For more reviews from Action Force by Valaverse check out the following:
Prototype Armaments
Posted by Barbecue17 at 2/03/2022