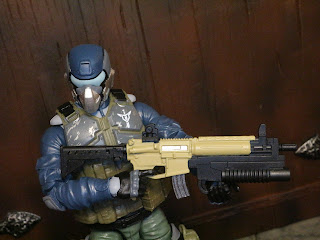 Today I'm checking out he fourth and final of the standard figures I ordered from Valaverse back in early January and this time it's the Steel Brigade. This guy is an army builder and, yes, he totally shares a name with the Steel Brigade figure that was a mail away promotion for the G.I. Joe: A Real American Hero line back in 1987. Apparently the trademark/ name/ etc. was available and so Valaverse snatched it up. That's a major flex on Hasbro, right? Pretty cool, though. This guy is a great army builder figure and with the additional weapon and gear packs available through Valaverse you could kit this guy out in multiple different ways. In Valaverse's Action Force universe the Steel Brigade are a support squadron within Action Force. There are 80 of them, so I guess you army builders have a nice set number of how many of these guys you'll need to procure to have a complete team of your own. Let's take a look at the Steel Brigade Trooper and see how he turned out after the break... 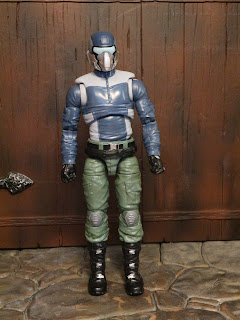 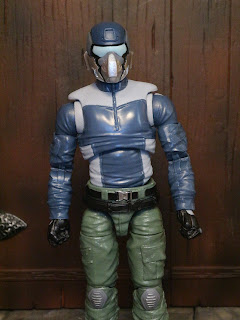 * The Steel Brigade trooper is wearing a pretty simple outfit: A blue and grey tactical sweater (I think it's the same as what Bone Collector is wearing) and green pants with cargo pockets. He's also sporting some small knee and elbow pads. While the design isn't a carbon copy of the vintage G.I. Joe Steel Brigade figure the colors definitely pay homage to that figure with a mixture of blues and greens. There's a lot of nice, crisp detail in the sculpt and a separate, but non-removable, belt around the figures' waist. 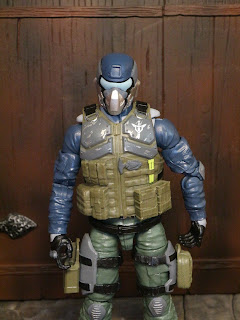 * The figure comes in the package wearing this incredibly cool vest and that's really the ideal way to display the figure. This is a fantastic piece with lots of pouches, armored plates, and even some cool little extras light glowsticks or something in the front. There's also a Steel Brigade logo on the left breast. The paint work is really clean and there's some nice weathering on the armored plates to show that this trooper has definitely seen a bit of action. 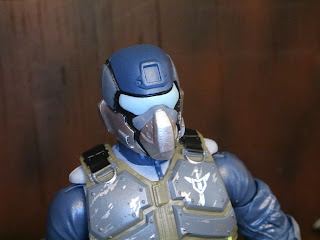 * The helmet looks great. It's a full helmet with a light blue visor and some heavy protective elements, especially around the nose and mouth. Maybe there's a built in gas-mask or something? 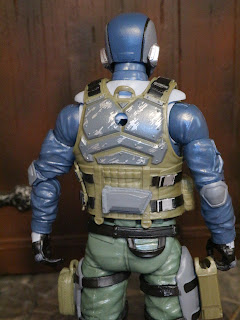 * Here's a look at the back so you can see more of the details like the excellent weathering on the armored plates, the strap on the back of the vest, and the loop on the separate belt for carrying an extra tool or item. 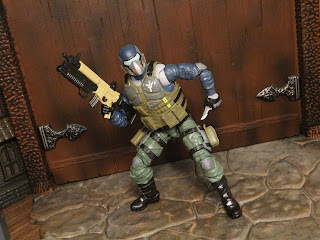 * All of the Action Force figures I've picked up so far are built about the same and they're quite similar to Hasbro figures, particularly the G.I.Joe: Classified Series figures. The number of joints and range of motion is excellent. The joints on this guy were excellent right out of the box and I didn't have to do anything to loosen them up. I think this is my favorite figure to mess around with. The vest inhibits is shoulder movement a little bit but it's not too bad and I still achieved great firing poses. 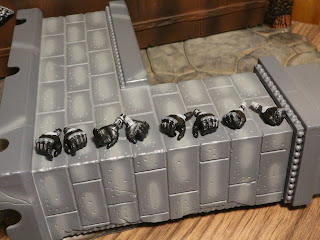 * The Steel Brigade trooper comes with eight gloved hands that you can swap out. The pegs are really thick and sturdy though I needed to use a little heat the first time to get them loosened up. There's a pair of standard grips, a pair of pistol grips, a pair of cradling hands for holding the barrel of a rifle, and a pair of fists. 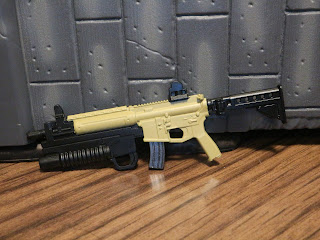 * We've seen the Steel Brigade Trooper's weapons before in the Prototype Armaments set but now they mostly have some paint apps that really improve their appearance. First up is what seems to be a an HK416 with an under the barrel 40mm grenade launcher. The weapon also came with the Bone Collector but there it's given a tan body with black attachments and a silver magazine. It looks awesome and goes great with the Steel Brigade. 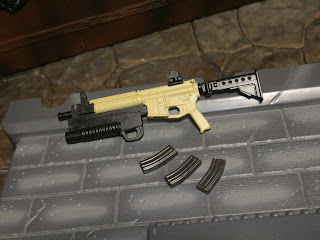 * The rifle not only has a removable magazine but it comes with two additional magazines as well. That's pretty cool! The magazines stay securely in the weapon and look fantastic. You can get some cool reloading poses using these. 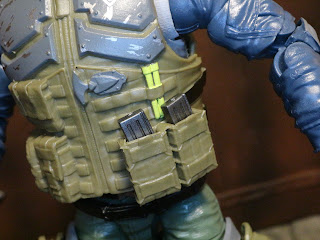 * The two spare magazines can be stored in two smaller pouches on the front of the Steel Brigade trooper's vest. That's awesome looking and keeps them close at hand. 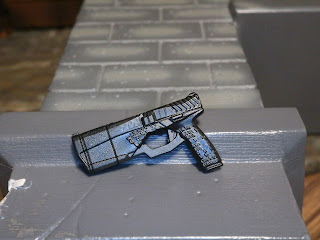 * The Steel Brigade carry these really cool and modern pistols. The grip looks like a pretty standard modern pistol but the front seems rather advanced. Maybe it has a built in suppressor or recoil reducer or something? 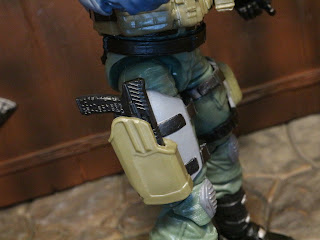 * The pistol fits nicely into a standard drop in holster that fits on the Steel Brigade trooper's right hip. It looks great and has quite a few paint applications as well. 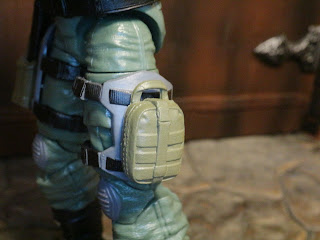 * On his left hip the Steel Brigade trooper is carrying a small pouch. Maybe this is a first aid kit or something? Or explosive charges? 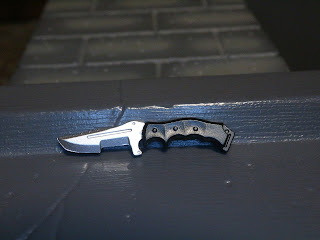 * This is a really wicked little knife for either taking care of business (cutting ropes, breaking locks, etc.) or for some CQB. The silver blade looks excellent and just puts this a step above most mainstream retail lines. Little stuff like that makes a big difference. 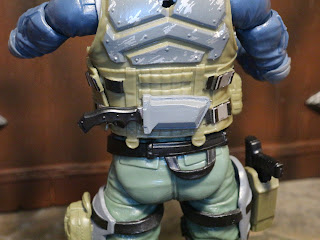 * The knife stores right in this sheathe attached to the back of the tactical vest. It slides right in and looks fantastic. 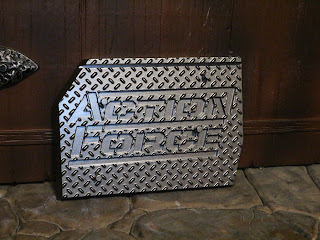 * I'm a huge proponent of action figures coming with display bases and Action Force's might be the best yet. The metal look of the display stand is fantastic and there are four pegs on the base, making it extra versatile. See that little slit at the back? If you want to cut out the file card from the Steel Brigade trooper you can even display it behind him. I really hope Valaverse starts offering these for sale by themselves as I'd love to use them for a few other lines. 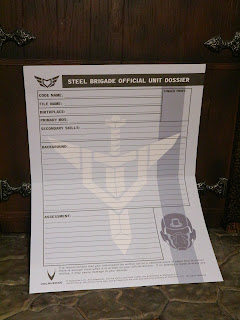 * To pay homage to the vintage mail-away Steel Brigade figure from G.I. Joe: A Real American Hero, Valaverse included a cool "Steel Brigade Official Unit Dossier" letter. It's printed on thicker paper and allows you to create your own bio for your Steel Brigade trooper. What a fun little throwback. 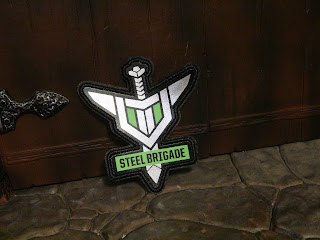 * The vintage Steel Brigade figure also came with a patch, so this one does too. It's really nifty! 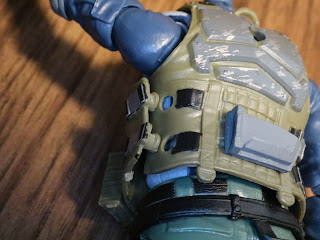 * My only complaint with the figure is that the tabs for the vest are a paint to reattach if you take it off. I had to heat the side with the holes using a hairdryer and then work the pegs back in. It worked and stays nice and securely but it's a long process to take off the vest, especially considering how cool the sweater is under there. 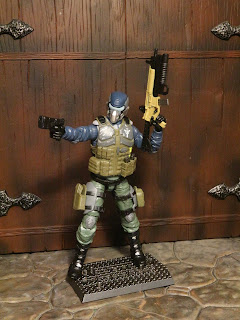 The Steel Brigade trooper may have just stolen the title of my favorite figure in this line from Kerak. Kerak is still a more unique looking figure but this guy is an excellent tactical military figure that just looks fantastic. He's really well articulated, too, and looks fantastic in a variety of poses. Great weapons, a cool helmet, a fantastic outfit, and the Steel Brigade extras like the patch and the dossier really make for a fun set. This is an Epic figure with a really high level of quality in all areas. I'm really liking this line and I'm excited to see how it continues to improve. I don't have any more of the standard boxed figures left to review right now but I do have one of the troop builders and a couple accessory sets to check out in the week or so to come, so keep checking back for more.

This is the first Steel Brigade figure I've reviewed. For more Action Force reviews check out the following:
The Bone Collector
Kerak
Prototype Armaments
Sgt Slaughter
Posted by Barbecue17 at 2/12/2022