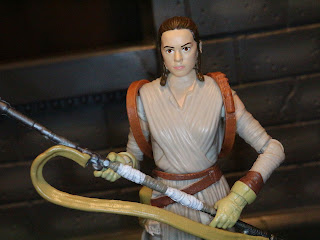 I've only bought a handful of 1/18th scaled Star Wars figures in the past five years or so but every now and then I'll snap up a new one. A week or so ago I was at a Bargain Hunt close-out store and found this Vintage Collection version of Rey in her Jakku outfit for around $4 dollars. At that price I decided to pick her up just because I really do like Rey's role in The Force Awakens and I love her costume. This version of Rey is really just a repack of the Wal-Mart exclusive 1/18th scaled Black Series Rey from the end of 2015/ early 2016 but I never owned that figure so it was new to me. Let's check Rey out a bit more closely after the break... 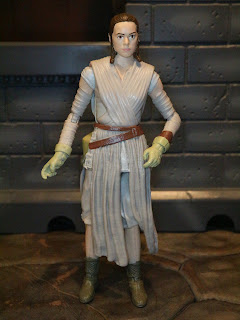 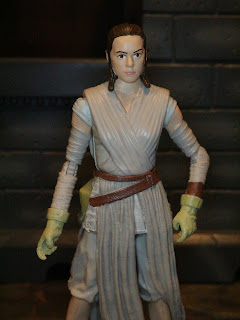 
* Overall Rey is a pretty fine looking Star Wars figure. Her outfit just feels very classically Star Wars and Hasbro did a nice job of capturing it here. The outfit has multiple different textures to show it's pieced together nature and the paintwork is quite neat and clean. Rey is wearing the gloves she wears when riding around on her speeder so this isn't technically her regular outfit but it's recognizable enough to be a pretty solid default Rey. 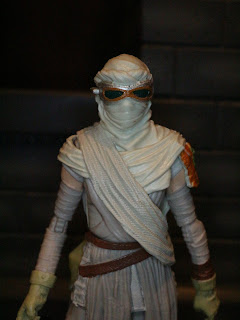 * My favorite part of this figure is the alternate wrapped head showing Rey's outfit she wears when riding her speeder. The paintwork on the goggles is pretty sharp. She kind of has an Invisible Man thing going on, doesn't she? The head swaps quite easily. Just remove the standard head and slide this one over the post. It's nice to get two pretty different looks out of a 1/18th scaled figure. 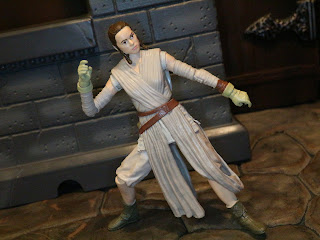 * Rey is quite well articulated and should fit in well with most other "super-articulated" Star Wars figures from the first Vintage Collection era. She feels nice and sturdy and can stand on her own easily enough, even when wielding her staff. 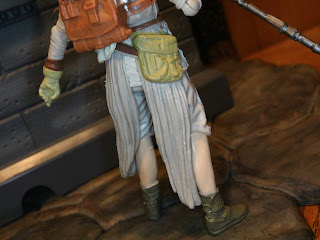 * The way Rey's wraps flow down look pretty good. The sculpting is nice and seems to convey the flowing, billowy appearance of the film outfit. Her pouch is also nicely sculpted and looks cool hanging on her right hip. 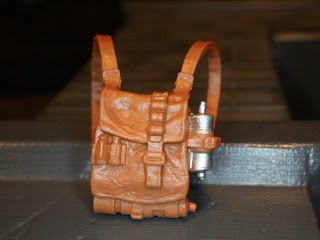 * I was really jealous back when this figure was released in the 1/ 18th scaled Black Series because the first 6 inch scaled Rey didn't come with a backpack (fortunately a later release came with one). This is a cool accessory that actually has working fasteners and a paint app to show off one of Rey's pieces of equipment. 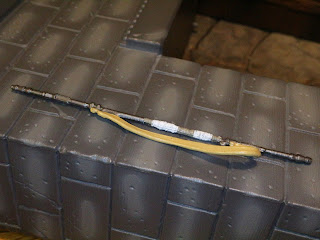 * Rey also includes her staff. It's a solid sculpt with a few paint applications and a strap that she can use to sling the weapon over her shoulder. 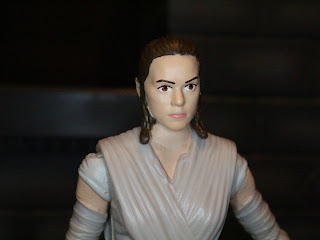 
* Rey isn't a terrible looking figure but it definitely isn't that accurate to Daisy Ridley's likeness. The 6 inch line has improved by leaps and bounds since 2015 and it would be nice to see the smaller scaled line improve in a similar way. 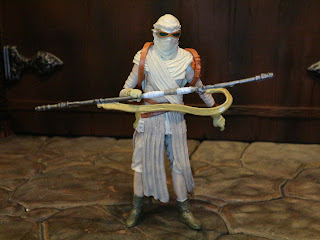 The Vintage Collection is a bit pricier than any other 1/18th scaled Star Wars line currently out there but, fortunately, Rey does come with a few extras that maker her feel a bit more deluxe than the standard figures. Still, she is largely a straight up repack so longtime collectors may be disappointed that Hasbro didn't offer anything really new to entice folks who picked up all of the previous figures. Rey is a Great figure, though, and definitely shows off how Star Wars figures have evolved over the years. The two different portraits definitely give the figure two different looks, which is always welcome.

For more figures from Star Wars: The Vintage Collection, check out the following: