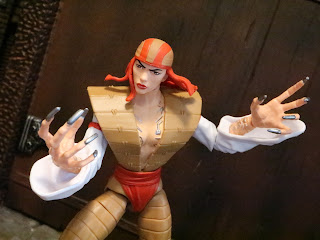 I'm still slowly making my way through the Super Villains series of Marvel Legends figures and now we've finally made it to Lady Deathstrike! Lady Deathstrike was one of the first figures from this series that I knew I wanted as I'm a big fan of the 1980s and early 1990s X-Men. Yeah, she first appeared in Daredevil, but over the years Lady Deathstrike (Yuriko Oyama) has been mostly known as an X-Men villains. Primarily, she's got it in for Wolverine. The animated series from the early 1990s even conflated her character with Mariko Yashida, further strengthening her ties to Logan. Anyways, this is Lady Deathstrike's second costume and her most well known as it represents her after she was turned into a cyborg by Mojo's Body Shop. What's her most recognizable feature? Her long, adamantium nails. She can scratch through almost anything! There hasn't been a Lady Deathstrike Legends figure since Toy Biz so she was definitely due for a remake. Let's take a look at this lethal lass after the break... 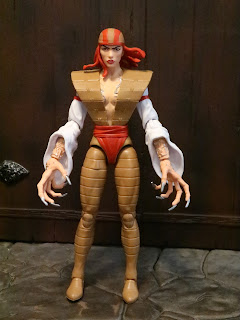 Accessories: Torso of the Xemnu build-a-figure. 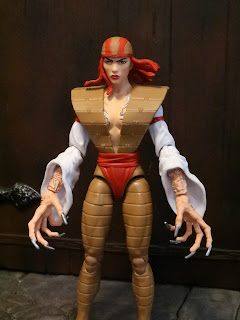 * As far as I can tell Lady Deathstrike is a completely new figure. She has a very unqiue look with lots of sculpting that seems like it doesn't have a lot of reuse potential so Hasbro really went all out on her. Her massive shoulder pads are a separate piece over her torso and what can be seen of her cleavage shows off some of the cybernetic details on her body. Her outfit is really odd but since I've been familiar with it for so long it's definitely very memorable. Who else dressed like this? Considering Yuriko Oyama is Japanese I'm guessing that the intention is that her outfit is styled after Japanese fashion. It looks that way although I couldn't pinpoint the exact influences upon it. 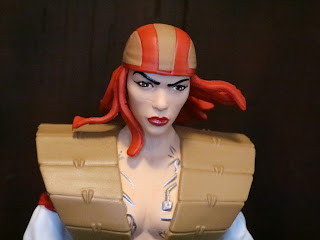 * Her face is fantastic. This is a huge improvement over the Toy Biz figure which was just incredibly odd looking. She's quite stern looking though with lovely features and nice work on her...hair? It looks accurate but I don't know if it's hair or part of her hat. The way it's sculpted to look like it's flowing is quite nice, though. 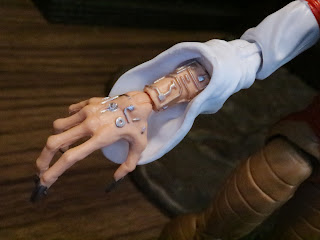 * Lady Deathstrike's clawed hands look fantastic and I love the grotesque look of her fingers. The cybernetic details covering her forearms and poking out of her sleeves are quite sharp, too. Toy Biz's figure had fully cybernetic arms but Hasbro's is a bit more subdued. 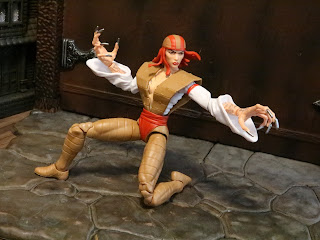 * Lady Deathstrike's articulation isn't much different than most other female Marvel Legends figures. Overall she's durable, poseable, and just fun to mess around with. Most joints have a great range of motion and the only problem I've noticed is her elbows, but I'll get to those in a minute. 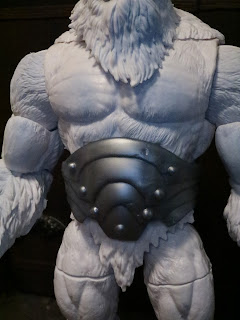 * Six of the seven figures in this series come with parts for the Xemnu build-a-figure (Dr. Doom is the figure without a piece) and Lady Deathstrike comes with the torso. After realizing I really wanted four of the figures in the set and was interested in Xemnu I decided to pick up everyone except Doom and complete him. If you're buying them all the BAF is a nice extra incentive. Otherwise, you can sell it and probably make a good percentage of your money back or trade it for something you need. 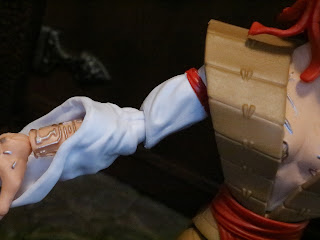 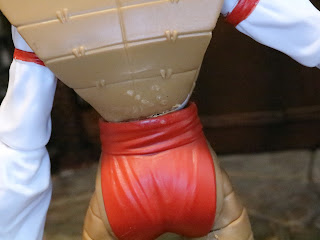 * There's some weird stuff on the back of my figure. It's kind of bubbly looking and I'm not sure if it's a plastic defect or some errant glue or something. Weird. 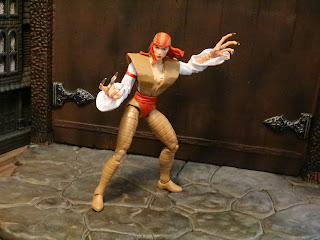 I really like this figure but it feels kind of underdone. The weird elbows and the QC issue definitely mar the figure a bit but there's also the issue of the figure just feeling a bit lacking. I'm guessing that since she comes with the biggest piece of Xemnu Hasbro decided to opt for some extras like alternate hands (which would have been super cool on Lady Deathstrike) but their absence is felt strongly here. She's a Good figure and a well deserved update but she might be the weakest figure in the series which is a shame. Not bad but just not as cool of a figure as Lady Deathstrike deserves.