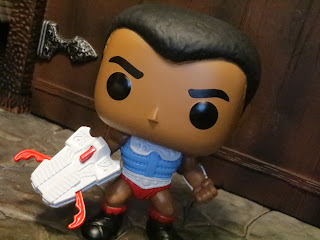 A new series of Masters of the Universe POP! vinyls has started showing up and so far I've managed to get my hands on four of them. Let's start things off by checking out Clamp Champ, one of the new characters introduced in the 1986 toyline. Clamp Champ has appeared in quite a few different MOTU comics over the years but hasn't made it into any of the animated shows until Masters of the Universe: Revelation last month where he appeared briefly in the first episode. The bios for Masters of the Universe Classics really did a lot to build up Clamp Champ's character (real name Raenius) and he tends to show up in most toylines based on the classic line. Ready for a look at the new Clamp Champ POP! vinyl? Then join me after the break... 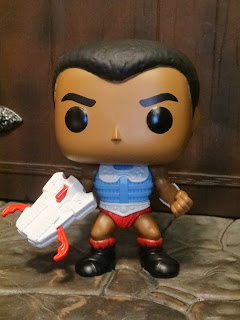 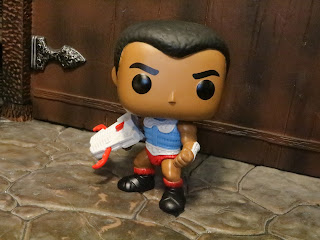 The Positives:
* Clamp Champ is a pretty standard Funko POP! with a swivel neck, a deep stance, and a bit of a pose. He looks good being posed looking forward, to the left, or to the right, so you have a few display options when placing him on your shelf. 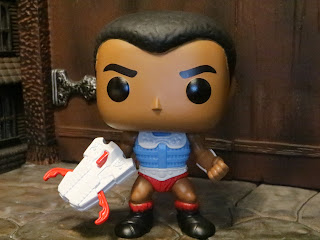 * Like King Randor, Scareglow, and Ninjor, Clamp Champ was infamously part of the group of MOTU figures in 1986 designed to take advantage of mostly reused tooling with new heads, some soft goods pieces, and a couple new weapons. That's why Clamp Champ is sporting the same armor as Fisto and the basic MOTU body. His colors are fantastic, though, and I love his blue and gray armor. We haven't seen a Fisto in POP! yet so this time around Clamp Champ is the trendsetter. 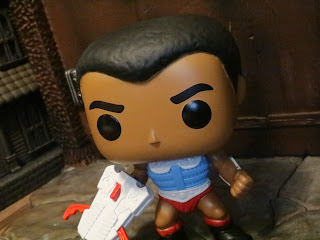 * Clamp Champ is just a regular looking guy so his headsculpt doesn't stand out too much. It does somehow manage to look like the vintage toy, though, so that's a plus. 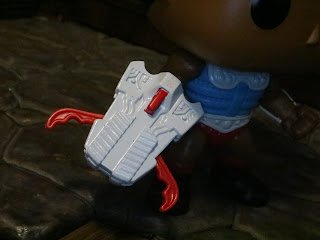 * Clamp Champ's power clamp accessory looks pretty incredible. The color is more gray than silver but the detail is on point here and the red claws and the button that activated them on the vintage toy stand out nicely. 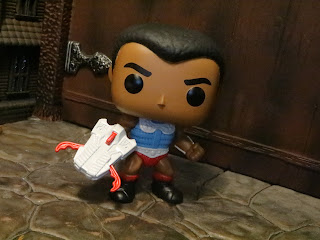 Clamp Champ turned out pretty nice. It's pretty much impossible to be the most exciting toy on the shelf in a line with scantily clad yellow sorceresses, giant crab men, and cybernetic pirates, but Clamp Champ still at least manages to be a Great POP! vinyl with a cool weapon. He's very faithful to the vintage toy which is probably what most people are expecting here. I was hoping he'd play a bigger part in Masters of the Universe: Revelation but since there's a second part coming with five more episodes perhaps he'll show up there.