Minifigure Review: Mer-Man from Masters of the Universe: Micro Collection by Mattel 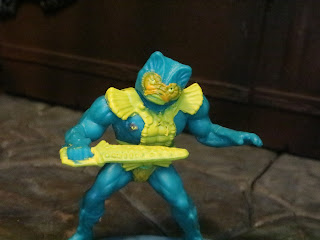 It's almost been a month since I last reviewed one of these Masters of the Universe: Micro Collection figures so I guess it's about time I checked out another. Remember that these are Dollar Tree exclusives and they're only a buck! Today we're going to be diving in and looking at Mer-Man! One of the original 1982 figures Mer-Man is one of Skeletor's most prominent lackeys who tends to show up in most MOTU toy offerings. Of course, most of the time Mer-Man toys are based on his appearance in the Filmation cartoon or on the cross sell art from the back of the package. Mer-Man's vintage head has often seemed like his least popular look which is unusual for a vintage toy but since Mattel seems to be going almost straight vintage with these little guys this Mer-Man is about as vintage as you can get without traveling back in time to watch Rocky III, listen to Thriller, and bite the head off of a bat with Ozzy! Let's check it out after the break... 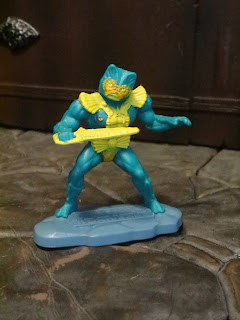 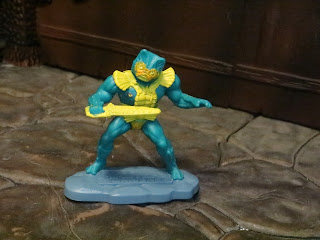 * The Micro Collection figures are simple painted plastic minifigures attached to a display stand with the Masters of the Universe logo on it. Mer-Man is very durable and made from a sturdy plastic that isn't rubbery at all. He's sculpted in a battle crouch with his corncob sword held out at the ready to cut anyone who dares to pollute the oceans of Eteria! Wait, does Mer-Man care about stuff like that? You would think so but he's also chumming around with Skeletor who you just know probably dumps his garbage into the nearest lake just for fun, so I don't know. 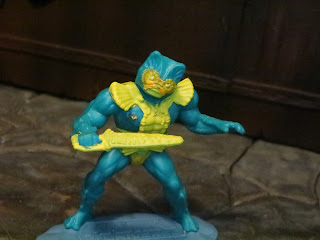 * Listen, for $1 the sculpting and design on these little minifigures is pretty impressive. Mer-Man's color is actually a bit darker than it looks in these pictures which is more accurate to the vintage toy. There's a lot of detail on the sculpt, too, especially on Mer-Man's face and on the details of his armor. 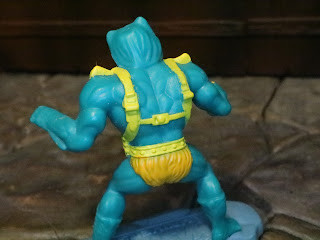 * The back of the figure shows off the straps just like the vintage figure had. Those are some pretty cool little details for sure. 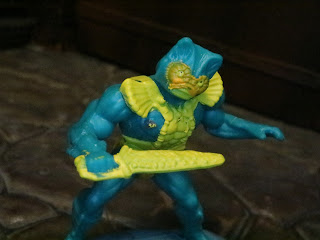 * Mer-Man definitely has some sloppy paintwork. Yes, yes, I know this guy is really tiny, so some of it is forgivable. My Mer-Man looks like he just crawled out of someone's polluted cow pond pond which isn't really a compliment here. 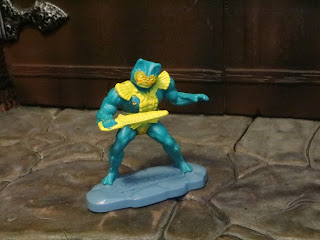 For a buck you should definitely just pick these up out of sheer curiosity. These are definitely worth the price of entry and if you get to a Dollar Tree with a decent selection you can even pick out the one with the best paint job. Mer-Man is a Good and a 1/2 minifigure and even with the little paint hiccups here and there (that's a more politer way of saying slop) there's still a lot to like. I really would be interested in getting more of these as I love the way Mattel has really relied on the look and style of the vintage toys for these.

If you're a fan of Mer-Man, the guy who made talking to fish cool, then check out my reviews of the Masters of the Universe Origins Mer-Man, the M.U.S.C.L.E. standard Mer-Man and green Mer-Man figures, the Panosh Place Mer-Man Collectible Eraser, the MOTU Colorforms Deluxe Play Set, the Monogram Mer-Man bag clip, the Geeki Tikis Mer-Man, the Loyal Subjects' Mer-Man, Super7's neo-vintage Mer-Man, the Mondo Exclusive Mer-Man, the Vinyl Soda Mer-Man, the Mega Construx Battle Cat vs Roton set, the MOTU Origins Lords of Power set Mer-Man, and the ReAction Mer-Man (Invisible) and Mer-Man (Carry Case Color).

For more Masters of the Universe: Micro Collection figures check out the following:
He-Man
Man-At-Arms