Minifigure Review: Orko from Masters of the Universe: Micro Collection by Mattel 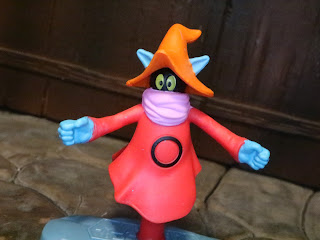 Let's check out the fourth figure in the five figure set of Mattel's Masters of the Universe: Micro Collection minifigures: Orko! I'm a huge Orko fan and have been for as long as I can remember. I'm a little older than some MOTU fans so I don't really remember a time when Orko wasn't a key part of MOTU. I really loved Orko's role in the recent Masters of the Universe: Revelation and I thought Griffin Newman did a great job with the character. I don't want to spoil things yet (though if you haven't watched the five episode show yet are you really that interested?) but I will say that Orko's role and interactions with Evil-Lyn were incredible and I'm heartbroken but optimistic for what might come in the second half of the series. Of course, this Orko is clearly based on the Filmation version of Orko which is the original Orko. That's interesting because the rest of the figures in this set are clearly based on the vintage toys but this isn't the vintage toy version of Orko. I prefer this one, though, so I'm good with it. Remember that these are simple minifigures sold exclusively through Dollar Tree for $1 each. That's pretty cool, right? Let's check out Orko after the break and see how he turned out... 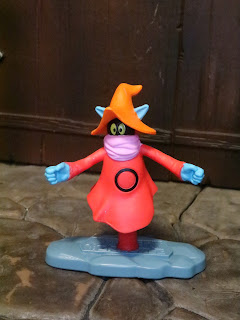 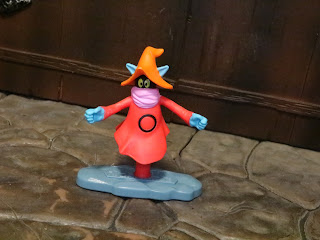 * Like the rest of the figures Orko is a solid, non-articulated minifigure permanently affixed to a display stand with the MOTU logo on it. Orko is depicted as hovering though the hovering effect is simply achieved by mounting the figure on a plastic rod that's molded as part of Orko's body. 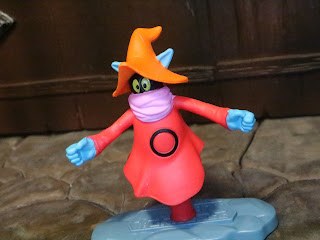 * The paint work is really good here, particularly on Orko's eyes and the printing on his "O." He's a really nicely painted minifigure with good sculpting that captures the character's animated appearance quite well. He's bright, colorful, and just a fantastic looking minifigure. 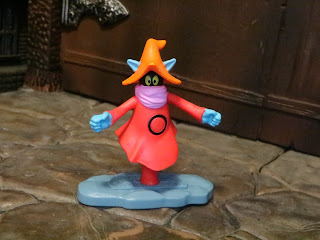 Yeah, this is a simple little plastic minifigure but considering he's $1 he really is quite a value. Orko is one of the nicest figures in this set and is just a gem of a find. Track these down if you like MOTU or just minifigures in general. No trick here; just a Great little toy!

Now... the fifth figure in the set is Skeletor. Ready for a review of him? You might just have to wait a bit as I've got something quite special prepared for him....