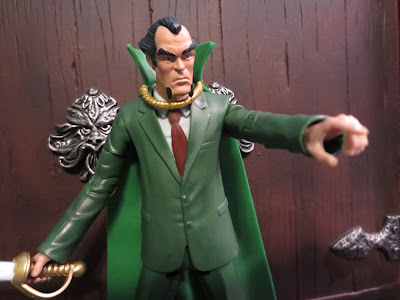 Today I'm looking at one of the three action figures I picked up this year while at Heroes Con in Charlotte, NC. I usually end up buying more but this year a combination of what felt like fewer vendors and higher prices caused me to cut back a good bit. I did pick up this Ra's Al Ghul figure from Mattel's DC Comics Signature Collection, however. When DC Universe Classics began ending at retail, Mattel attempted to keep the line going online by offering a monthly subscription, Club Infinite Earths, similar to their Masters of the Universe Classics sub. Unfortunately, the DC figures offered through this sub were not as interesting to me. I stopped being a completest on DC Universe Classics shortly after the second Wal-Mart wave and the Gleek/ Wonder Twins SDCC fiasco and only continued to pick up Batman characters. I never bothered with the DC Signature Series figures due to the price and the fact that I had to pay extra shipping. Ra's was the November 2013 release and the penultimate figure in the subscription's lifespan. When I found this guy at a booth at Heroes Con for $20 bucks, though, I jumped on it. Is this Ra's Al Ghul worth tracking down to add to your collection? Find out after the break... 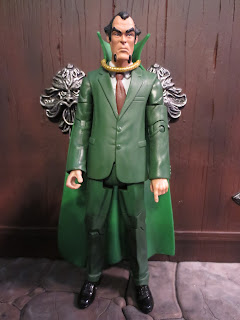 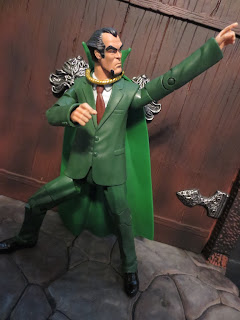 *While Ra's uses the far more restrictive suited body he still has a decent range of motion. Mattel's DC offerings were built on reusing body parts and this suited body works pretty well. You're not going to get crazy dynamic poses but I'm still fairly confident that this is the most well articulated Ra's Al Ghul figure ever released. He feels solid and durable, as if he could go multiple rounds against the Dark Knight. 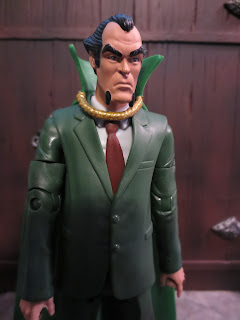 * The suited body used here looks just fine to capture a very traditional look for Ra's. The cape is a separate piece added on which definitely captures one of his most well known appearances. I like the head sculpt as there is a good bit of character in it. Ra's seems like he'd be a tough guy to read and this facial expression captures that. Is he angry? Indifferent? Who can tell! Ra's always like to keep them guessing. The hair and eyebrows are pretty nicely rendered and feature some decent textures. 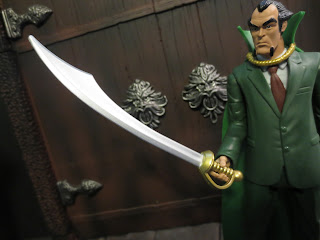 * Ra's is an excellent swordsman and is commonly seen using a middle eastern inspired scimitar. This sword is pretty huge but it looks just fine with the character. He can hold it well in either hand. It has a nice metallic paint job for the silver blade and gold hilt and strikes a nice balance between being too soft and too brittle. 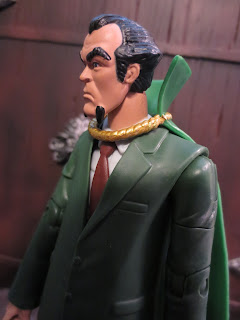 *So...what missing from Ra's? As soon as I took this figure out of the packaging I knew something was wrong, but I couldn't put my finger on it. Give up? Where's the white/ gray highlights on his hair? Yes, Mattel actually released this guy without the white and grey highlights. Ever since Ra's al Ghul appeared in June of 1971 he has had grayish white highlights in his hair. It's part of his signature look and helps to convey the mysterious nature of Ra's. Not only do we not know much about where he came from but neither can we even tell how old he is. The hair hints at age, something that is not seen in his body and abilities. 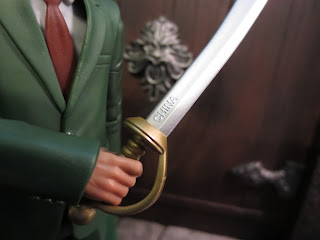 * This is a small nit compared to the lack of whitish/ gray hair, but why does Mattel put these stamps right on their accessories. Does any other company do this? This has to be some kind of weird Mattel policy. It makes this look like Ra's picked this up at that store in the mall that sells swords, incense, and dragon statues. 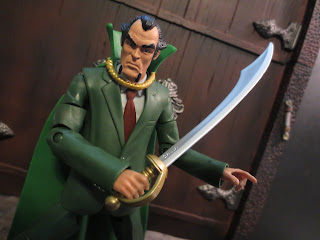 Ra's isn't a bad figure but he's not the most exciting figure, either. I'm always willing to grow my Batman collection and I especially love new versions of the villains. This is a decent Ra's al Ghul figure, better than others, but still not as nice looking as the Trinity version. I'm still not sure we've received a definitive version of Ra's yet, and the lack of the graying hair keeps this one from being a contender. I'm giving this guy a Good and a 1/2. He's a solid figure, but also a bit dull and lazy. Actually, that's a good way to summarize the last couple of years of Mattel's work with the DC liscense, don't you think?

I haven't reviewed any other Ra's Al Ghul figures on the site but I did review his daughter, Talia Al Ghul, from her appearance in Batman: Arkham City.