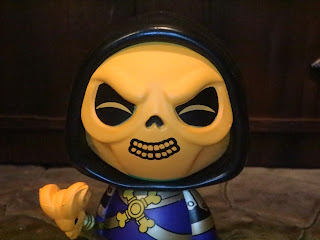 Ready for another Masters of the Universe Dorbz review? Today we're checking out the "chase" variant of Skeletor which official sources seem to refer to as Skeletor (Black Hood). And don't get me wrong, that's true! This Skeletor does have a Black Hood. He typically goes by another moniker in the fan community, however, and that moniker is Disco Skeletor. Yeah, baby! This is Disco Skeletor! So, what the heck is a Disco Skeletor? Let me tell you that tale throughout this review. It starts back with the 200x Masters of the Universe toyline which released in the United States in early 2002. In 2003, Mattel released a bizarre repaint of the standard Skeletor figure with a black hood, black limbs, gold armor, and a vac-metal, shiny purplish blue torso. At the time he seemed like a bizarre repaint and nothing more, but over the years his legend has grown. Let us ruminate on the mystery of Disco Skeletor as we check out this Funko Dorbz Skeletor chase variant... 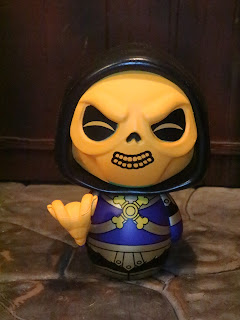 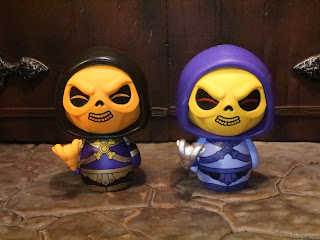 
* On the left is the chase variant Black Hood Skeletor while the standard Dorbz Skeletor is on the right. As you can see they are the same figure/ mold just with different paint schemes. 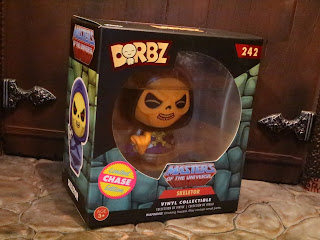 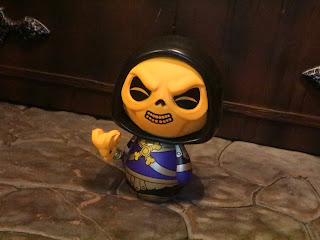 * Skeletor is a pretty standard Dorbz figure and is painted in the same strange color scheme as the 200x repaint figure. Why? Well, apparently an actual reason for many of the repaints of the 200x characters was that marketing felt kids didn't like the figures because they looked "naked" with so much skin showing. To counteract this, the repaints were designed to make the figures look like they were wearing more clothing, thus Skeletor has sleeves and pants here. Still, why the strange colors?

* Not only did Disco Skeletor have a garish new outfit but he also had a differently colored face. It was a much darker yellow, almost an orange color. Not only did Funko capture that color change here but they also gave him a hint of green under his chin (which the 200x version also has). Another theory of the strange colors is that if you put the standard 200x Skeletor design in a paint program and invert the colors, this is what you end up with. 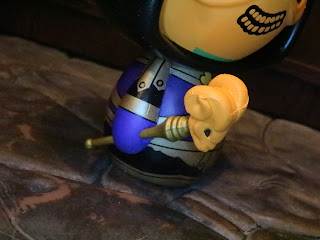 * Skeletor is holding his Havoc staff here and guess what? It's gold, too! Another thought on this guy is that he was inspired by the 1987 film's God Skeletor. Given the golden armor and Havoc staff, that seems like another likely explanation. While the 1987 movie wasn't as big of a cult classic film and kind of loved by the MOTU fan community like it is now, the designers were surely aware of it. 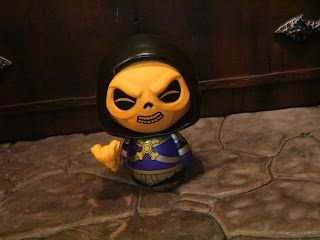 What are your thoughts on Disco Skeletor? I think it's interesting how Funko has latched onto it as a go-to variant for Skeletor. We've seen this design in Hikari vinyls, POP! vinyls, and even as an upcoming exclusive in the Vinyl SODA line. heck, there's even a metallic variant of this same figure out there! This guy is a Good and a 1/2 figure. He's not an absolute must have but he's a fun conversation piece and might make you nostalgic for the 200x era of MOTU. He's one of the pricier Dorbz figures (none of which are very pricey) so tracking him down may cost a bit more than the other Skeletor variants. That's the price of the disco life, baby.

For more Dorbz: Masters of the Universe figures check out the following:
He-Man
Man At Arms
She-Ra
Posted by Barbecue17 at 4/04/2020