Action Figure Review: She-Ra from Masters of the Universe ReAction by Super7 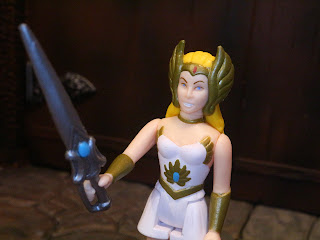 Wow! This is my third review of a She-Ra figure in just a little over a week. That's great! Right now, thanks to Mattel's She-Ra and the Princesses of Power line there are quite a few different She-Ra dolls on the market. Factor in Super7's "no holds barred" release schedule for the Masters of the Universe line this year and we've received as many or more She-Ra figures this year than MOTUC released during the line's entire run! Today I'm checking out the ReAction She-Ra, a figure that was originally available in a 2-pack at SDCC 2018 with Hordak. I never had that set, though, so She-Ra is all new to me! Let's check her out after the break... 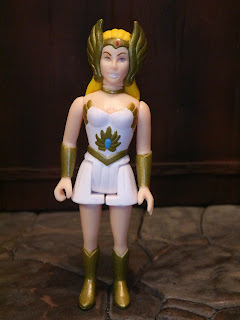 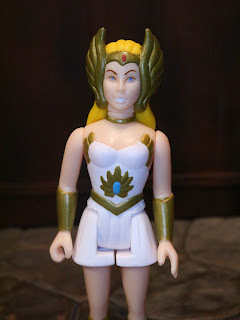 * Remembering that the intention of the ReAction line is to re-imagine the MOTU crew in the style of vintage Kenner Star Wars figures, I think Super7 did a pretty good job. She-Ra definitely looks like she would fit right in with the Empire Strikes Back line or Mattel's Clash of the Titans. She's clearly based on the Filmation cartoon design for She-Ra rather than the vintage toy design, but I imagine that's what most folks prefer. There's a nice amount of detail here and, for the most part, the paintwork is clean. 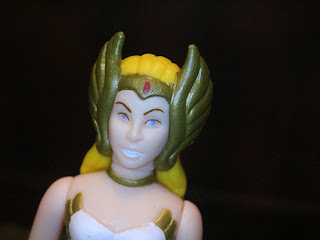 * The headsculpt is very fitting for a vintage figure from the late 1970s/ early 1980s (compare She-Ra's face to Kenner's vintage Princess Leia figures) and she has the toothy grin that many vintage toys had. I originally had blue or silver lipstick but, nope, this appears to be a grin. Her tiara is really well done, as is her hair. Her hair is actually somewhat pliable, allowing her head to turn a bit more than you might think. 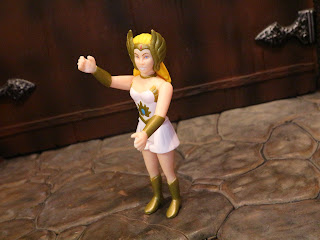 *   If you've ever picked up a retro figure like this, you know what to expect: 5 points of articulation, all swivel joints. She-Ra feels very well made and sturdy.  Super7 has been very consistent in the quality of their ReAction lines over the past couple of years and has definitely perfected the style. 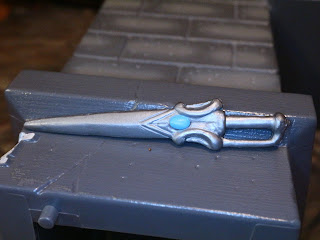 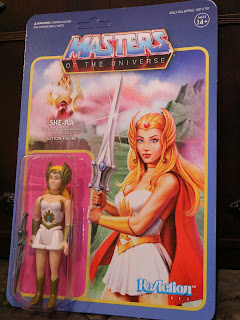 * The card art on most ReAction figures released by Super7 is beautiful and their Masters of the Universe line is no exception. She-Ra features an awesome illustration from Jason Edmiston of the character with a new Crystal Castle background.  I love how She-Ra has her own unique background, and I hope that some more Great Rebellion figures come along at some point to give her some company. To preserve the card I actually made a slit in the top of the blister so I can slide the figure in and out. It work great and allows the figure to be displayed inside and outside of the card. I've got mine hanging on a metal pegboard similar to what you'd see in a retail store! 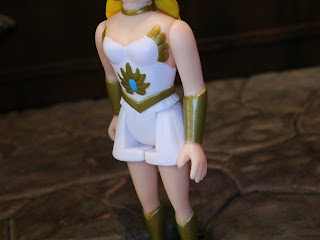 * She-Ra's skirt is handled kind of like Shadow Weaver's robe, but it looks really odd for some reason. It's just a strange design choice that hurts the look of the figure. 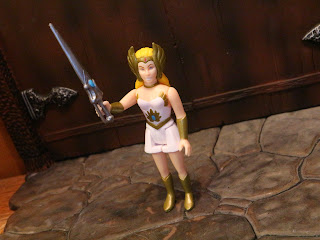 I'm quite excited to finally have a She-Ra for my ReAction collection. She's a Good and a 1/2 figure; not the best in the line, but by no means bad. I like the diverse array of characters that Super7 has been making for the ReAction line and I'm hoping they continue to release more and more. The Great Rebellion doesn't always get a lot of attention in most MOTU lines so it'd be nice to see the classic crew like Glimmer, Frosta, Castaspella, Bow, Kowl, and Madame Razz in ReAction form. Let's hope Super7 is able to get to these folks, as the She-Ra license seems to be a bit tricky for some companies to work with these days.


If you're a She-Raver who digs She-Ra/ Princess Adora then check out the figures I've reviewed: The Masters of the Universe Classics Galactic Protector She-Ra, the Club Grayskull She-Ra, the She-Ra from the Super7 Battle for Etheria 2-Pack, and Mattel's She-Ra and the Princesses of Power She-Ra and Battle Armor She-Ra and Swift Wind.