Wrapping Up 2021: Moss Man from Masters of the Universe: Figural Bag Clips by Monogram International 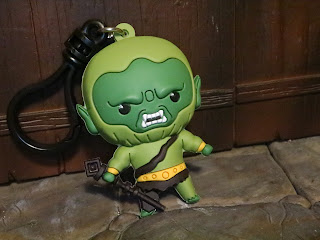 I've only got about 10 days left in January which is when I'll stop wrapping up the 2021 reviews and move on to the new stuff for 2022. Today I'm going to start checking out some of the second series figures from Monogram International's really cool Masters of the Universe: Figural Bag Clips. Series 1 came out back in early 2020, which now seems like a lifetime ago, and series 2 just started showing up in October. Well, kind of. It turns out that some of the series 2 clips were released in the Walmart exclusive 3-packs over the summer so I didn't have as many from series 2 to track down. I stumbled upon these in a Books-a-Million back in late November or early December but since I already had four of the figures from the Walmart exclusive 3-packs, I decided I would just track them down loose online. For this series Monogram International has placed a cardboard sleeve over the clips so you'll have a harder time telling what you're getting (Boo! Hiss!). Anyways, my daughter picked one up and felt it and convinced me it was Teela. I decided to go for it and picked this one up. It turned out to be Moss Man, my favorite MOTU character! How awesome, right? I love Moss Man and I'm always excited when he makes his way into any MOTU toyline. Let's take a look at this (unscented) MOTU figural bag clip of Moss Man after the break... 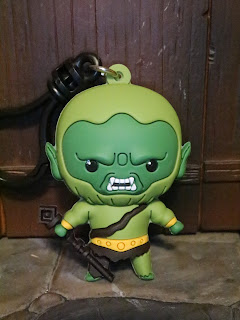 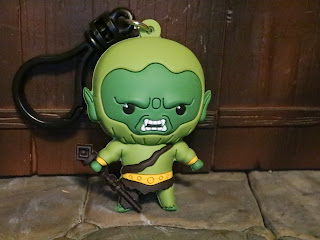 The Positives:
* Moss Man looks pretty amazing here. I love the style of these little figures and I particularly like how Moss Man clearly has two shades of green to represent his moss-like fur (or is it fur-like moss?) and his skin. He definitely looks different than Beast Man which is fantastic. Are the pupils in his eyes even darting to the side like on the vintage figure? He's toting his classic mace but he also has the strap around his chest like the Masters of the Universe Classics Moss Man. Perfection! 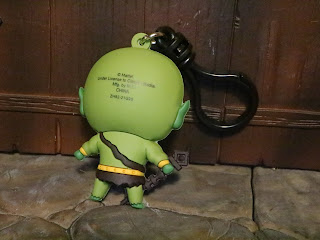 * Rather than having a metal key-ring, these figures have a plastic clip. They're marketed as bag clips, so I guess the intention is to display them on a backpack or satchel of sorts. From the back you can see more of the strap Moss Man uses to carry his satchel through the woods. What do you think he carries in there? Probably a variety of rare and ancient seeds. 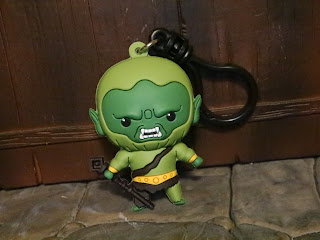 I'm a bit biased here because of my love for Moss Man (real name Kreann’Ot N’Norosh) but I definitely think he's one of my favorite bag clips, if not my favorite. He has a fantastic sculpt, great colors, and the cool little strap on his chest from the MOTUC figure, which is always a plus. Moss Man gets a Great and a 1/2 rating from me. He's a fantastic way to show your love for Earth (or Eternia) wherever you go.