Wrapping up 2021: Mercenary Teela from Masters of the Universe: Revelation Eternia Minis by Mattel 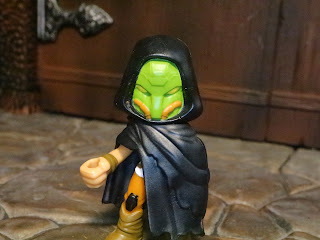 As I'm wrapping up stuff I picked up in 2021 I'm making my way through the second series of Mattel's Masters of the Universe: Revelation Eternia Mins with a look at Mercenary Teela. Based on her appearance in the second episodes of the series, Teela is wearing the black robe and protective mask she wears when she encounters Stinkor. It's cool to see another different look for Teela but how does this version fare as an articulated minifigure? Let's check her out after the break and find out... 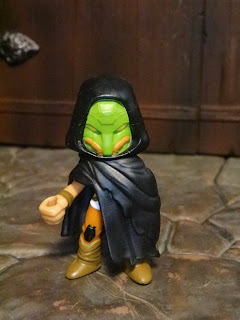 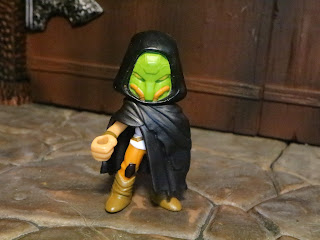 The Positives:
* I really like the look of the figure. As a minifigure, Mercenary Teela just looks very cool. The half concealed body, the black robe, and the bits of her standard uniform peeking out. The paintwork and sculpt are really nice on this one. 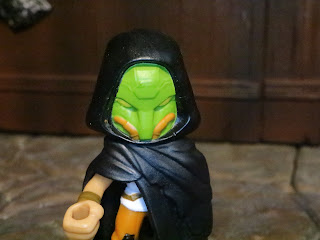 * The mask is really cool, too. We don't get to see Teela's face here but the mask she wears is pretty. I've heard that it's inspired by the vintage Road Ripper design but I'm not sure if that's true to not. I can kind of see it, I guess. 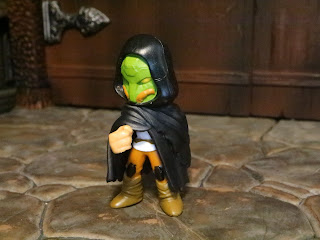 * Teela does have all of the articulated you'd expect from this line: Swivel waist, swivel shoulders, and a swivel head. She's solid and you can get a limited number of poses out of her.
The Negatives:
* If Mercenary Teela were a standard minifigure I wouldn't have a problem with the fact that she's mostly covered by a cloak. As an articulated minifigure that's a bummer as her left arm is useless. You can't do anything with it. 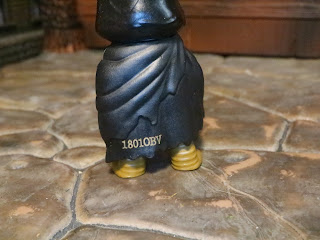 * Mattel, for some reason, put a big numerical logo on the back of her cape. It looks pretty ridiculous and seems like a pretty bone-headed move. Why? it's an eyesore. 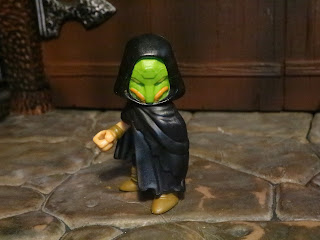 With limited articulation and no accessory, Mercenary Teela is one of the less impressive figures in this series. She still has a cool design and it's always neat to see a character in a new costume but this one just isn't as fun as the rest. To be honest, I can't say I have a better solution as to how Mattel could have handled the cloak. Maybe soft goods are have made it a removable piece? She gets an Eh and 1/2 from me. If you love this look and/or Revelation then you might pick it up but I'm guessing most folks can safely skip this one.
Are you a fan of Teela? The check out Teela: Warrior Goddess, an archive of all of my Teela reviews!
For more Masters of the Universe: Revelation Eternia Minis check out the following:
Beast Man
Beast Man & War Sled
Fisto
Fisto and Stridor
Metallic Faker
Metallic Whiplash
Skelegod
Whiplash
Posted by Barbecue17 at 1/11/2022