Wrapping Up 2021: Hordak (Mondo Exclusive) from Masters of the Universe by Mondo 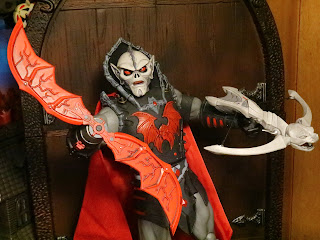 Back in May of 2021 put both the standard and Mondo exclusive Hordak figures on order and I quickly grabbed the exclusive. A few months later they even put out a Filmation inspired variant with Imp, but I skipped that one. Mondo has been putting these 1/6th scale Masters of the Universe figures since 2019 and they've been a line I've really enjoyed. The price has really jumped on these, though; He-Man and Skeletor were around $160-$165 in 2019, Keldor was $185 in April 2021, and Hordak was $230-$240 in May of 2021. Yikes! The standard Hordak includes his crossbow and staff while the Mondo exclusive also includes an alternate arm cannon hand with the spinning blade and spinning mace attachments from the vintage Hurricane Hordak figure. Mondo does their own thing with these figures, sort of borrowing from various sources to craft a new look for the character. Let's take a look at the Mondo exclusive Hordak after the break and see if he's fit to lead the Evil Horde.... 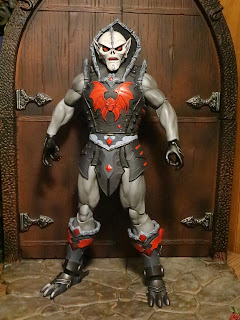 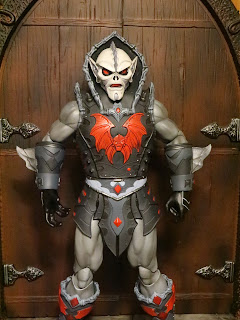 The Positives:
* Hordak is a very impressive looking figure. Appearance wise, I'd probably put him just below Man-At-Arms and Mer-Man. While he uses the same basic body as most other figures in this line his elaborated fitted armor and various accessories like his bracers and boots really make him quite impressive. The armor fits perfectly and looks fantastic on the figure. It's not-removable but the design is so incredible I can't imagine you wanting to take it off. 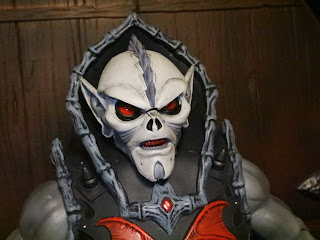 * The portrait is quite cool. Hordak has a few different styles across his various depictions: There's his very boney looking face, his robotic lookin face, and his more demon looking face. This look seems to capture elements of his boney and demon looking face, leaning more towards his head being covered in white flesh here rather than bone. The paint work is really nice with a pronounced ridge across his head and lots of details on his facial features. 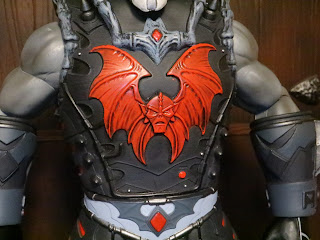 * Here's a close-up of the armor so you can sew that cool Evil Horde logo he's sporting. I say it all the time: Hordak is a master of branding! The bat across his belt is really cool, too. Stylish. 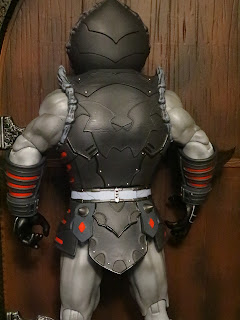 * The back of his armor is rather plain paint wise but there's still a ton of detail here. It looks fantastic and everything seems very intricate. 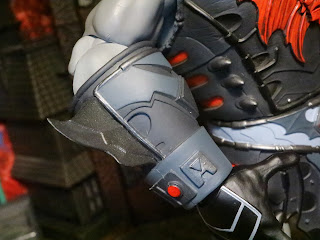 * His bracers are quite cool and seem to have a bit of technological influence mixed in. They are removable if you pop the hands of the figure off, though he looks kind of skinny without them. 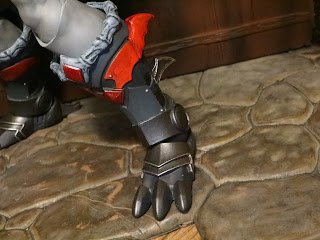 * Hordak's boots are pretty claw. They look like segmented metal pieces with space for his massive claws adored with spikes and bat designs. he's also sporting the bone motif on the edges of the cuffs, similar to the motif on his collar. 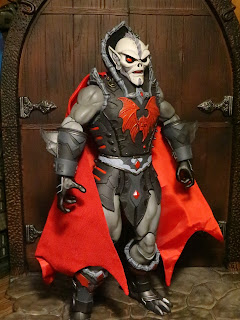 * Hordak's cape is really nice. The tailoring is excellent and it's held in place with actual metal chains that fit over the spikes on his shoulders. It looks amazing on display and really fits this version of Hordak well. 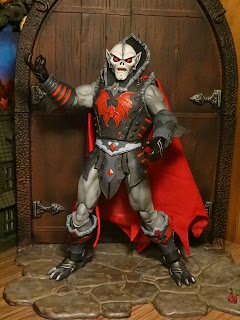 *  Mondo's MOTU figures do not feel like your traditional 1/6th scale figure but more like oversized Masters of the Universe Classics figure.Hordak is heavy but very durable. I love how sturdy they feel. Mondo definitely has done a great job with the quality here and the articulation isn't bad, either. Hordak is fairly fun to pose, though a bit limited at times (more on that in a moment). The joints stay together great but, if you push them to far, they do pop out rather than break. 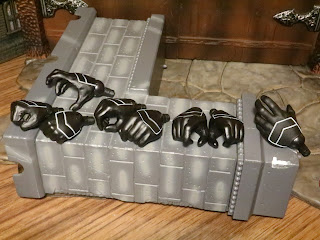 * For handling the business of the Evil Horde Hordak comes with four pairs of hands: Some gesturing hands, standard grips, pistol grips, and fists. The wrist pegs are nice and thick and the hands are just a bit flexible making it quite easy to place accessories in them. They've got some nice painted details on the hands, too. 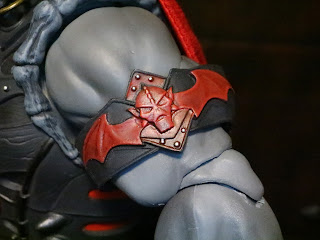 * Hordak has to show off his Horde pride with this super cool removable arm band. I love the look of this! The paint and sculpt are really cool. It's really not that huge of a piece but it makes a bold statement. Think we'll ever get any more of the Horde from Mondo? 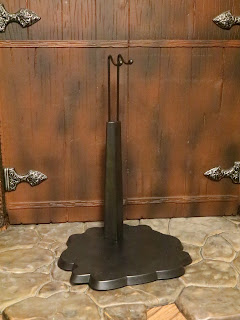 *  Hordak comes packaged with the same stand as every other figure: A black plastic display stand with a metal arm that rests under his crotch to keep him standing. It's not the most interesting design for a stand but it works quite well for a heavy figure like this. The bottom of the stand has a stylized "M" for Mondo bit that's all the personality you'll find on this piece. 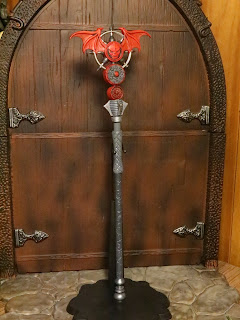 * Hordak comes sporting his staff. It's really long and is modeled after the staff that came with the 2005 NECA Staction designed by the Four Horsemen. It's made from two separate pieces (the lower and upper parts) and it's an incredibly sculpted piece. Mondo does a terrific job with these oversized accessories and you'll have fun checking out all of the little sculpted details and paint applications on it. 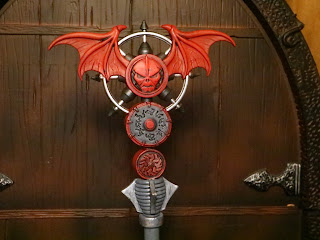 * Here's a close up of the top of the staff. It's really very cool with amazing detail. 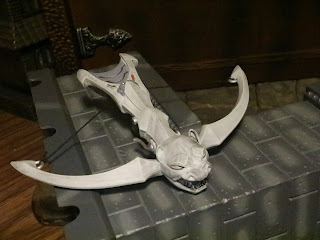 * Hordak is also armed with a crossbow, just like the vintage toy. This one reminds me quite a bit of the crossbow from Masters of the Universe Classics. Besides a nice paintjob and sculpt this bow actually has a real string as well. It's not functional or anything but it does give the piece a cool "mixed media" feel. 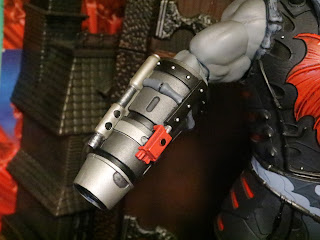 * Since this is the Mondo Exclusive version let's take a look at the alternate accessories based on the vintage Hurricane Hordak variant. First up is the spinner/ cannon arm which fits over Hordak's right forearm if you detach his hand and slip off his gauntlet. This is the attachment piece for the additional accessories but it also looks like the cannon arm from the Filmation series. It's quite versatile. 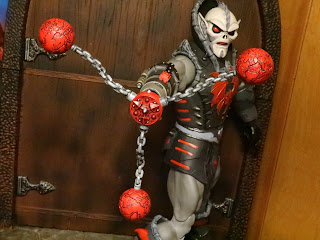 * The larger of the two attachments is the Thunder Mace, a simple device consisting of three worn and weathered orbs attached to pieces of chain. The chains are solid, making sure that the orbs look like they're in the middle of swinging at all time in your display. This is a pretty siezeable accessory and it actually looks quite cool. 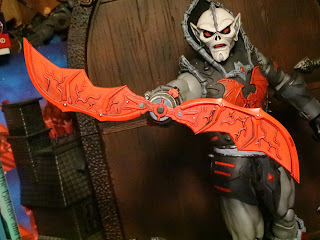 * My favorite of the two is the Bat Wing Propeller. Rather than just being a spinning blade I think the intention of the propeller is allowing Hordak to fly with it like a small, personal helicopter. The detail on the wings is pretty cool and it's definitely the most menacing of the extra pieces. 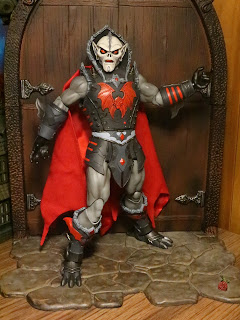 The Negatives:
* Mondo hasn't changed their articulation in the line or anything but Hordak's movement does feel quite restricted due to his armor, his waist piece, and his bracers. You're not going to get much elbow movement out of him at all, nor much range in his hips or in his core. 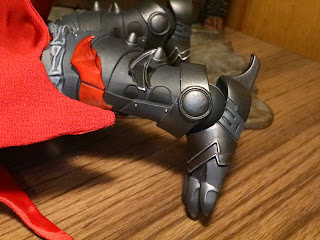 * Hordak's ankles seem a bit loose so sometimes he tends to tumble forward. It's tough to keep him standing upright in some pretty basic poses which is a real flaw, especially for such a large and heavy figure. 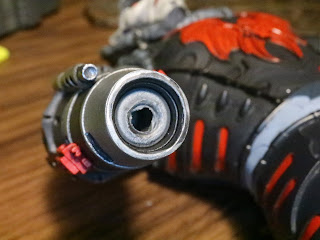 * The Hurricane Hordak pieces are supposed to slide right inside of the cannon arm but take a look at mine: There's a lot of flashing in there. I really had to work to get this cleared up so stuff would fit inside. That's a pretty bad QC issue for a $240 dollar figure. 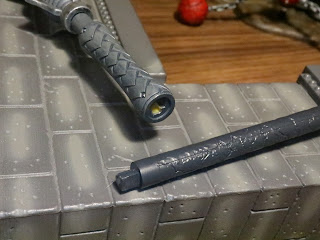 * Making the staff two separate pieces was a smart idea for getting it in the hands of the figure and storing it with less chance of breakage. Unfortunately, the staff just doesn't want to stay apart too well. 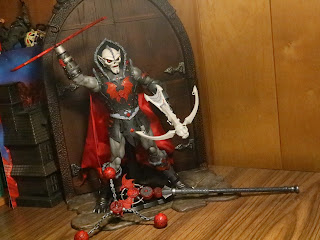 I really like the look of Hordak here. He's definitely one of the more interesting figures in Mondo's MOTU line so far with a great sculpt, excellent paint work, and some very cool accessories. Unfortunately, his higher price robs him of some of his coolness as does the number of small QC issues. He has some trouble standing and little things like the loose connection of his staff and the flashing on the cannon hole bring him down a bit. Most of those are easily rectified with a little work but is that something that really should be expected on a figure that costs over $200 dollars? I wouldn't think so. The exclusive Hordak is quite cool but I sort of feel like Mondo has hit a price point that makes these much less attractive than they were. Hordak gets a Good and a 1/2 from me; he's still quite cool but not an easy recommendation, particularly without any alternate portraits. Most figures have come with at least two alternate portraits so why doesn't Hordak? Still, the detail work on the armor and accessories are pretty cool.
If you're a fan of Hordak then check out my reviews of the vintage Buzz-Saw Hordak, the Masters of the Universe Classics Hordak, "Buzz Saw" Hordak, and the Spirit of Hordak, NECA's Hordak staction and Hordak Mini Bust, the MOTU Origins Hordak, "Buzz Saw" Hordak, and the Filmation inspired Hordak from PowerCon 2021's The Evil Horde set, the ReAction Hordak and Hordak (Grey),the Tweeterhead exclusive Masters of the Universe Legends Hordak maquette, the Super7 neo-vintage Hordak, the Sonic kids meal Hordak, and the M.U.S.C.L.E. slime Hordak.
For more of Mondo's Masters of the Universe check out the following:
Faker (Mondo Exclusive)
He-Man
Keldor
Man-At-Arms (Mondo Exclusive)
Mer-Man (Mondo Exclusive)
Scareglow
Skeletor