Wrapping Up 2021: Teela from Masters of the Universe: Figural Bag Clips by Monogram International 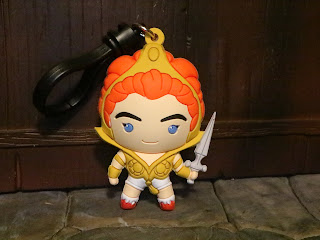 Series 2 definitely fills in the rest of the main Masters of the Universe cast nicely and I'm especially glad to see Teela here. Usually I wouldn't be at all surprised to see Teela since she's one of the A-listers of Masters of the Universe but Funko has me always anxious to see her now since they've had the MOTU license for almost a decade and they have only produced one Teela item (a Pint Sized Heroes minifigure). Monogram International has been producing MOTu stuff for less than three years now and they've already got Teela on shelves. How about that? Let's take a look at the warrior goddess Teela after the break... 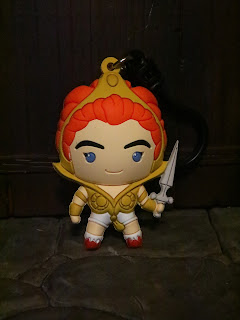 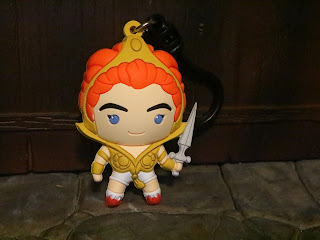 The Positives:
* Teela looks pretty classic looking with the unique aesthetic of this line giving her a bit of a chibi feel. She's wearing her usual ornate outfit, sporting her pulled up red hair with a gold tiara, and carrying a sharp sword. It's quite similar to what she usually totes around in the Filmation series. In fact, the figure itself looks very Filmation inspired. 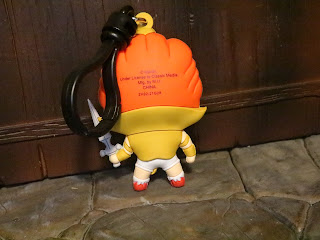 *  Rather than having a metal key-ring, these have a plastic clip. They're marketed as bag clips, so I guess the intention is to display them on a backpack or satchel of sorts. There's not a ton of detail on Teela's back but you can see the rest of her costume an the other side of her sword. 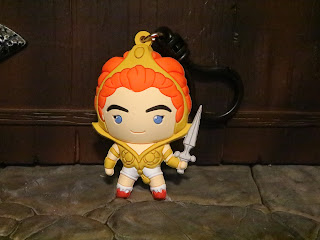 Teela turned out well. She's not as detailed or as interesting visually as some of the other figures but she's a vital part of the Heroic Warriors so her inclusion is quite welcome. She's armed, too, which makes her even more fun. Teela's a Good and a 1/2 little bag clip and a fine addition to the set. I'm going to skip reviewing the He-Man and Skeletor from series 2 for now but I've got one more of the MOTU bag clips to review. Who do you think it'll be? Stay tuned and you'll see shortly...
I've reviewed so many Teela items on this site that she has her own review archive. Check out Teela: Warrior Goddess for all of my Teela reviews!
For more Masters of the Universe Figural Bag Clips check out the following:
Battle Armor He-Man
Battle Armor Skeletor
Beast Man
Evil-Lyn
Faker
He-Man
Hordak
Man-At-Arms, Power Sword He-Man, and Battle Cat
Mer-Man
Moss Man
Orko
Prince Adam
Skeletor
Stratos
Trap Jaw, Havoc Staff Skeletor, and Tri-Klops
Posted by Barbecue17 at 1/21/2022