Action Figure Review: Man-At-Arms from Masterverse/ Masters of the Universe: Revelation by Mattel 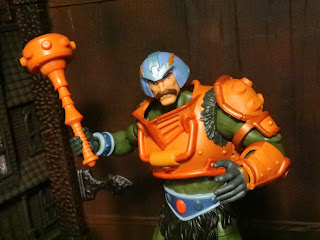 How about another Masterverse/ Masters of the Universe: Revelation review to make the wait for Christmas just a bit easier? Today's installment of this Masterverse mini marathon is Man-At-Arms in his classic look from before the disappearance of magic from Eternia. Man-At-Arms doesn't have this look for too long in the show and I'm a little disappointed that Mattel went with the classic appearance before his much cooler "Most Dangerous Man on Eternia" appearance but hopefully we'll get that version at some point in the future. Man-At-Arms, as always, is a huge part of Revelation and Mattel crafted a figure that feels like a mixture of a Masters of the Universe Classics figure and a 200x figure. Ready for another cool action figure of Duncan? Then let's jump in after the break... 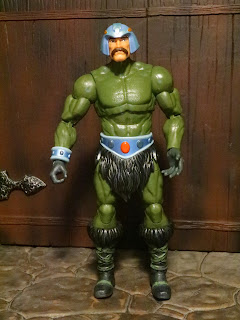 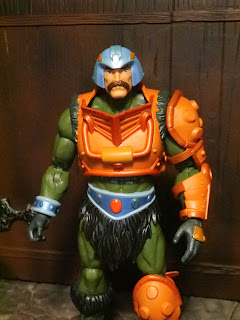 The Positives:
* Man-At-Arms looks like Man-At-Arms, so that's a good thing for sure. While Duncan's entire body is the same as He-Man's from the neck down, the unique coloring and the addition of four separate pieces of armor makes that reuse fairly unrecognizable. Reuse is just a part of MOTU's DNA, afterall. The chest armor is really nicely sculpted with lots of cool details like tubes, grills, and fur on the shoulder and a great paintjob with multiple colors on his belt and wrist cuff. There's even some drybrushing on his furry trunks and boots to highlight the details and add a bit more color. 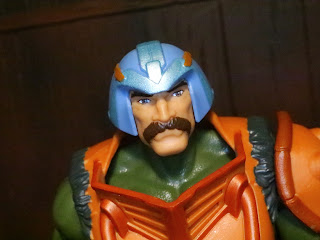 * The headsculpt isn't bad at all and the helmet itself looks great. Matte; did really good on MAA' steely eyes and his giant mustache. That's a manly stache! 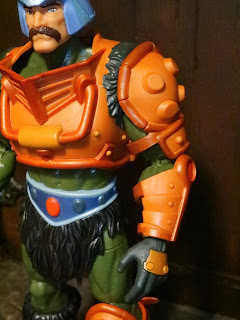 * The armor on his left arm is made from two separate pieces and a painted and sculpted detail on his left hand. It looks great, especially the pauldron, and it fits on him pretty well. 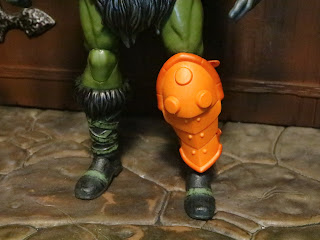 * He's also sporting an armored pad on his left leg that matches the rest of his armor. All of the pads are removable if you want to take them off for some reason. 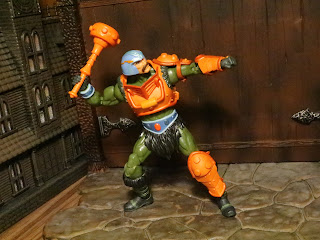 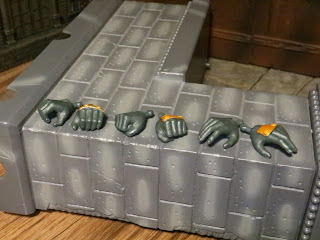 * Duncan comes with six interchangeable hands: Two grips, two fists, and two open palmed gesturing hands. They swap out easily and give a little more variety to the figure. 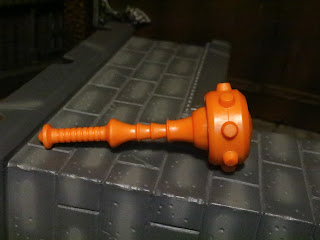 * Lastly, Man-At-Arms comes with his classic mace. It's orange, nicely sculpted, and looks like it can deliver a painful blow to the Evil Warriors. What else did you expect? 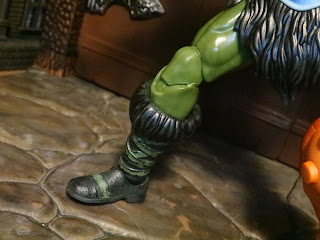 * My only real criticism is that Man-At-Arms' right boot swivel rotates a bit too freely. There's not much friction in the joint which might be a problem keeping him standing in some poses. 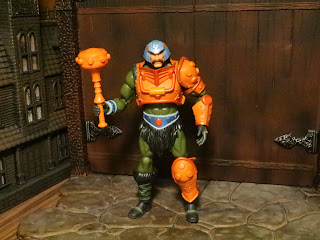 While I really wanted the more battle weary "Most Dangerous Man in Eternia" look for Man-At-Arms to be released first, this is still a very solid action figure. He has fantastic armor, excellent paint work, and he's quite well articulated. This is a Great action figure of Man-At-Arms and despite whether or not you enjoyed Revelation this is an excellent Man-At-Arms with a very classic look to him. I thought Man-At-Arms was a fantastic character in Revelation and I'm really hoping we get his upgraded appearance in Masterverse next year. I'd also love a young Duncan with the Sorceress and baby Teela. That'd be a fantastic set as well, maybe through Mattel Creations.