Action Figure Review: Spikor from Masterverse/ Masters of the Universe by Mattel 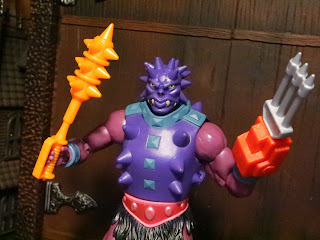 Today is the third day of this Masterverse mini marathon and it's time for the third figure from Masterverse series 2: Spikor! I'm always excited when we get figures of some of the B and C list characetrs and Spikor definitely meets that criteria. The guy didn't even get a Staction in NECA's continuation of the 200x series. In fact, in the first half of Revelation Spikor was actually just Skeletor in disguise, transformed by the Shaping Staff. He did show up in the second half of the series, though, and was in a few battle scenes, which was a welcome treat. I like Spikor's look and while he's very traditional here he still looks cool in this slightly sleeker appearance. Let's check out Spikor, the untouchable Master of Evil Combat, after the break... 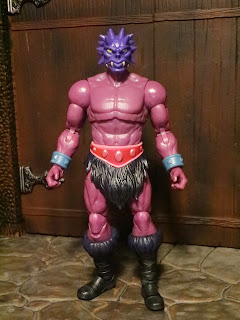 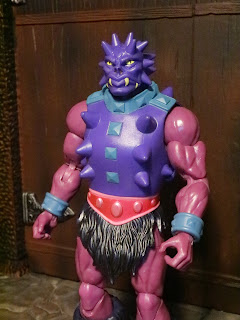 The Positives:
* Like many of the figures in this line, Spikor uses the He-Man base body for almost everything from the neck down. It's his funky spiked armor and his purple color scheme that really helps him to stand out from the crowd. He's pretty fantastic looking and I really like how the blue of his armor and the multi-colored red belt break up the purples. The armor is easily removable, something that can't be said for the real Spikor's armor. It's supposedly magically infused to his body as a punishment for trying to steal a sacred scroll. 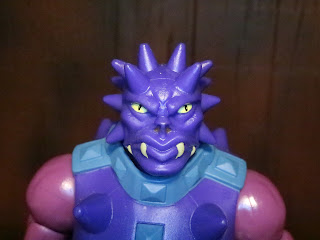 * Spikor's headsculpt is great. I love his mean look, his wicked little teeth, and his porcine nose. He's a funky looking dude and since the armor is supposed to be magical I'm assuming the helmet is magically bonded to him too, right? That'd make sense. Then again, it also would make sense that maybe this is just his regular helmet and the armor he is cursed with was designed to replicate his appearance. Who knows? 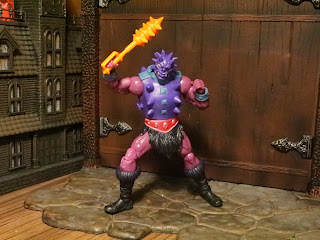 * This line has very solid articulation, really some of the best I've seen on Mattel action figures. He moves freely, has a nice range of motion, and the joints are plentiful. 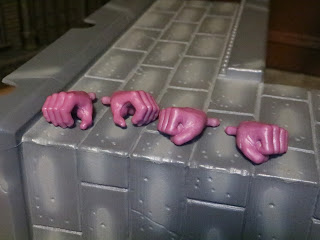 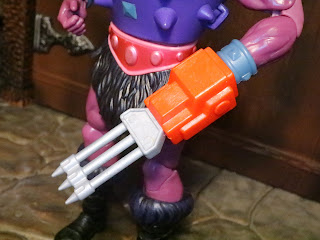 * Spikor also comes with his cool trident hand although this one's a bit different looking than his classic trident. In Revelation it seems to be able to fire spikes so it's more of a projectile weapon than just a straight up melee weapon. You can put it on either wrist although Spikor wears his on his left. The sculpt of the red box part makes me think of a Kenner Real Ghostbusters rolepay item for some reason. Must be the big, boxy shape. 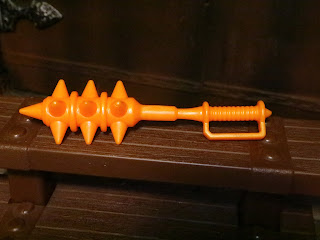 * Spikor also comes with his orange, spikey mace. It's big, it's orange, and it looks pretty nasty. 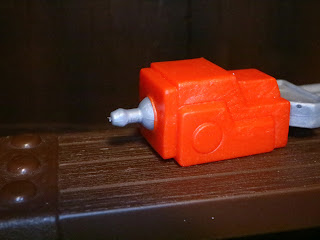 The Negatives:
* My complaint is maybe less of a complaint and more of a warning but do be careful of the peg on this piece. It seems like it could be brittle. it's kind of small and I just get a little worried when swapping it in and out on Spikor. 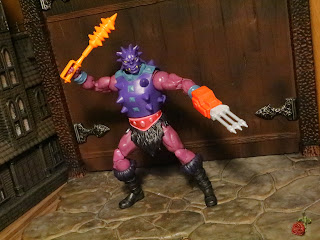 Spikor isn't a bad figure at all but I just don't find him as impressive as most of the other Masterverse releases so far. He's a Good and a 1/2 figure and fans of this line and of Spikor will definitely want him but he's not likely to draw much interest from the passersby or the cherry pickers. It would have been cool if his trident was a bit more impressive. It's kind of dull for what it is, you know. Still, his colors are great and he's fairly eye-catching but he just isn't as sharp as I hoped he would be.
If you're a fan of Spikor then check out my review of Super7's Filmation inspired Spikor, the M.U.S.C.L.E. green Spikor, the Vinyl SODA Spikor, the POP! + PEZ Spikor dispenser, and the POP! Spikor #20.
For more Masterverse reviews check out the following:
Battle Cat
Beast Man
Evil-Lyn
Faker
He-Man
Man-At-Arms
Moss Man
Scareglow (Mattel Creations)
Skelegod
Skeletor
Posted by Barbecue17 at 12/20/2021