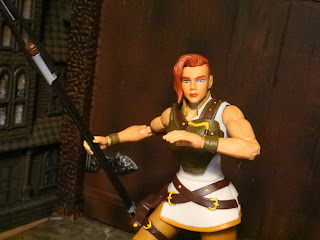 Today I'm checking out the last figure of series 2 from Masterverse/ Masters of the Universe: Revelation and this time it's Teela in her "Modern" outfit (that's how the character sheet refers to this particular costume). Do I even dare talk about Teela and Masters of the Universe: Revelation? Yes, I do. I liked it. It was fun, unique, different while still being familiar, and it had lots of great Easter eggs and nods to the wealth of MOTU lore from the past 40 years. Would I have changed some things if I had been telling the story? Of course, but overall I'm satisfied with what we got. Poor Teela, however, has really drawn a lot of criticism due to her outfits, her character arc, and the fact that the show focuses heavily on her. Hey, if I had written the show it would have been all about the adventures of Moss Man and Cringer as they cruise around in the Land Shark, so be happy with what you got. I'm going to give my review of the figure after the break but I'm also going to talk a heck of a lot about Teela in Revelation, too....
Anyways, in my mind Teela has always been a main character in MOTU and I think it was interesting to see more events from her perspective. Teela's never been a peripheral character and she's never been a "civilian" character. She's as hardcore an as deadly as anyone else and a core part of the Heroic warriors/ Masters of the Universe/ whatever you want to call them. Teela's also always been a bit opinionated in most media and quick to act, whether for good or ill. She's also the person closest to Adam, other than his parents, who doesn't know his secret. For being someone with so much responsibility for the safety and wellbeing of Eternos, Teela sure has had a lot of secrets kept from her. The identity of her mother, her true nature and destiny, and the real identity of her best friend (and perhaps love interest). That's a lot of significant stuff that Teela was left in the dark about and while I don't necessarily love how everything went down in the show I do see where Teela comes from in being so angry. How many times did she risk her life or the lives of others to protect or save Adam, now knowing that he was fully capable of saving himself? Why wasn't Teela told? In some mediums it makes sense for the hero to keep their identity secret to protect loved ones but it doesn't make as much sense in MOTU. Skeletor and the Evil Warriors are already targeting Randor, Marlena, and the other Heroic Warriors every chance they get. Does He-Man's secret being hidden really protect them or just lead to some awkwardness and inefficiency. I can imagine Teela seeing it that way. Plus, it has to hurt to know that Adam shared his secret with Orko rather than her. Ouch. Anyways, I think Teela is as deserving as a starring role in the show as any other A-list character, I think part 2 fully gave He-Man his chance to shine and I think Teela was rather justified in how she felt. Now, about her outfit and new look? I'll cover that in the rest of the review. 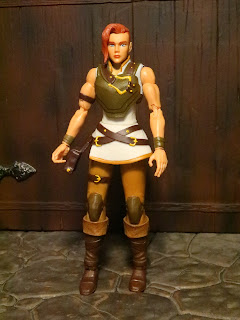 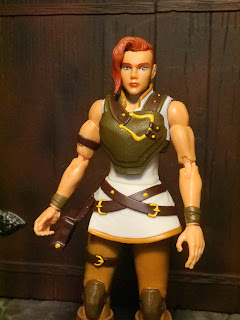 The Positives:
* While Teela wears her classic outfit in flashback scenes her main look throughout the series is different, intended to be more armored and reflect her new role as a travelling mercenary. Overall it really is a simple look with similar colors to her classic outfit but a design that seems more like something you'd see on a rogue or fighter in a fantasy game like Dungeons and Dragons. I like how the color scheme is similar but it still offers up a noticeable different look for Teela. The straps on her outfit look fantastic and her armor is simple but seems quite effective. 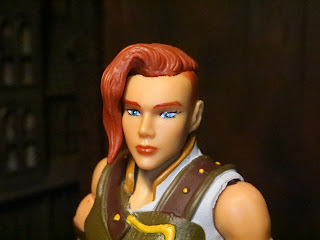 * I honestly think that the most criticism about this version of Teela is aimed at her hair. I will admit that it is weird to see a more modern hairstyle on a MOTU character. I don't know that I dislike it but it wouldn't have been my first choice for her. Still, Mattel did a pretty nice job with the headsculpt and capturing the hairdo and Teela is instantly recognizable here. 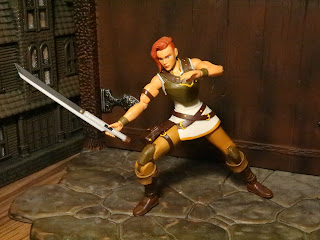 * Overall I really like the articulation on the figures in this series. It's probably one of the best lines in terms of the quality of the figure builds and articulation scheme that Mattel has put out. Teela moves nicely and has plenty of useful joints with a great range of motion. 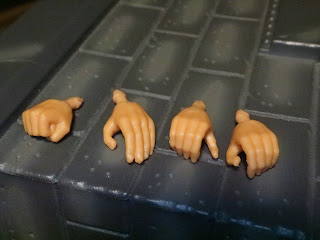 * Teela comes with four hands that you can swap out with a little effort. She has a right fist, a left gesture, and a pair of standard grips. You may need to use a little heat but they do give the figure some nice display options to utilize her arsenal. 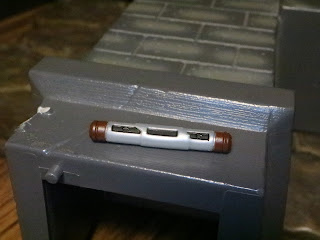 * Teela uses a very cool technologically advanced staff that can be compacted into a small, almost lightsaber sized, handle. It's a neatly detailed little piece. 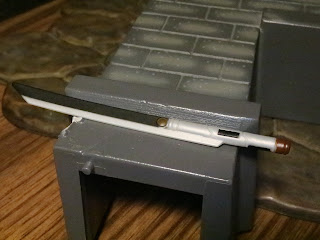 * The staff has multiple functions and Mattel included two of them in the package as weapons. First up is a more standard sword. The staff converts into a blade. 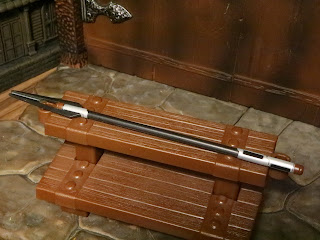 * Next up is a staff with a spear like end. Teela is known for using both staffs and swords so it's nice to get both in this set. Pick the one you like best or go crazy and have her dual wield them. Your choice. 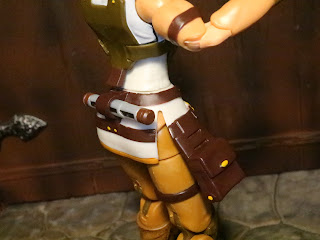 * When the staff is not in use Teela can store it in the beltloop on the back of her belt. It fits quite securely and looks pretty cool there. She also has a neat pouch on the side that's probably loaded with goodies. 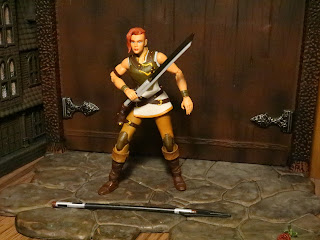 How'd Teela turn out? I think she's pretty Great. There's a classic styled Teela coming out in Masterverse later on but this one brings something really unique to the table. A different outfit, different personality, and some rather different weapons. If you didn't like the character arc that's fine but as a figure there's not too much to complain about here. I always find it fascinating to see different takes on the MOTU cast and this one definitely is a unique take on Teela. I think she's quite fun, nicely articulated, and well accessorized. What more could you ask for?
I've reviewed so many toys of Teela that she has her own review archive. Check out Teela: Warrior Goddess for all of my Teela reviews.
For more Masterverse reviews check out the following:
Battle Cat
Beast Man
Evil-Lyn
Faker
He-Man
Man-At-Arms
Moss Man
Scareglow (Mattel Creations)
Skelegod
Skeletor
Spikor
Posted by Barbecue17 at 12/21/2021