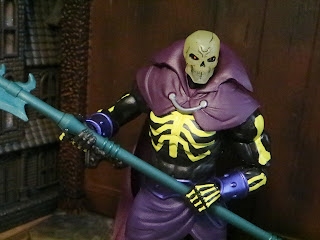 "You will be haunted… by Three Spirits… Without their visits,” said the Ghost, “you cannot hope to shun the path I tread. Expect the first tomorrow, when the bell tolls One."
He's not Jacob Marley but the Masterverse Scare Glow is paying you a visit this Christmas season! OK, I intended for this for Christmas Eve and Christmas Day but ended up not getting around to it. Oh well! He's still spooky, it's still the Christmas season, and you're still here. Let's do this! Anyways, Scare Glow has already been released in Masterverse as a Mattel Creations exclusive. He was sold on July 22nd and shipped in September. I even used him as my special Halloween review. This version is not an exclusive, however, and is part of the third series of Masterverse/ Masters of the Universe: Revelation figures. He's not quite as cool as the Mattel Creations exclusive Scare Glow but if you missed out on that one this version of the Evil Ghost of Skeletor isn't a bad consolation prize. Let's take a look at Scare Glow and see how this ghost with the most compares to the previous one after the break... 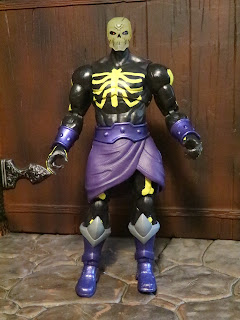 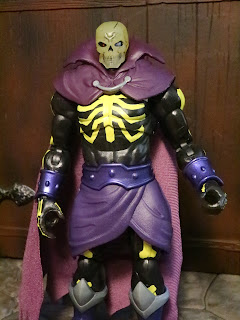 The Positives:
*  Overall, Scare Glow is quite similar to the figure released earlier this year as a Mattel Creations exclusive. Like that figure this Scare Glow is cast in black plastic with his bones painted on. Here they're more of a traditional off-white/ glow in the dark color than the neon green of the exclusive. He's wearing a superb "outfit" with a purple waist robe and his traditional purple cape with an elaborate mantle. I love the metallic paint used for his boots, wrist guards, and belt, and the white of his bones just jumps out! There's no way this guy is just going to fade into the background of your toy shelf! 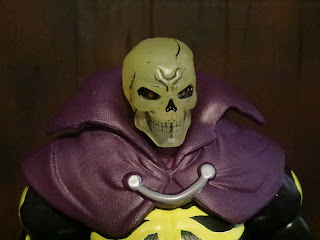 * The headsculpt is excellent and oh so evil! I really like this version better than the exclusive version as as the cracks and the lines on his skull are more pronounced. He really does look truly evil, doesn't he? This is one of the most menacing looking toys I've ever seen. It's a fantastic sculpt and looks better in the classic colors of Scare Glow. 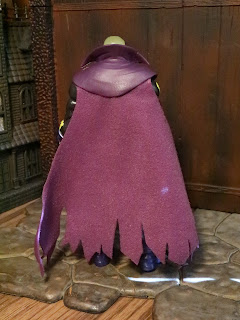 * While the exclusive Scare Glow had a much longer cape with wires in it for posing this version has a standard cloth cape. It's tattered and worn and fits around his neck and rests under his mantle. It's a great looking piece and while it's definitely not as impressive as the exclusive version's cape it's still quite nice. 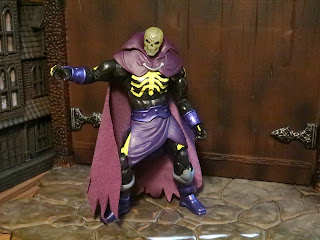 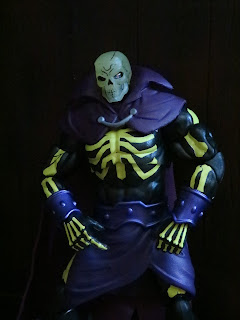 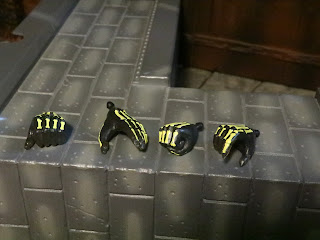 * Scare Glow comes with four interchangeable hands complete with lots of painted on bones. He's got an open palmed left hand and a gripping left hand and a right hand fist and a pointing right hand. They swap pretty easily and do give a nice variety of posing options. The hands are also cast in a smoky looking plastic that makes him seem more ethereal. 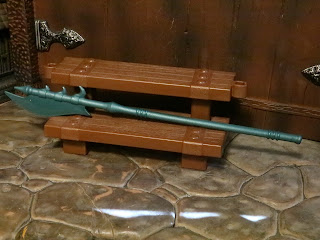 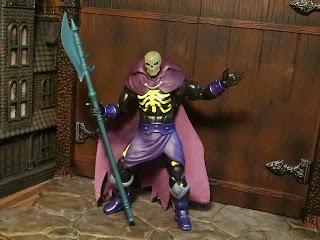 Overall, this version of Scare Glow is probably a pretty good option for folks who missed out on the exclusive. He's also desirable for anyone who just likes Scare Glow, too, since his colors are a bit more classic. He's missing the very cool sword of the exclusive, the wired cape, and the great packaging, but considering you can pick him up for retail price that's not bad at all. He's a Great figure and well worth adding to the set, especially if you missed the exclusive. Scare Glow had a great role to play in MOTU: Revelation and it's nice to see him get two action figures out of the show.