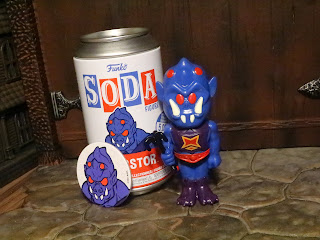 Today I'm going to start another review mini marathon, this time covering five of the recent releases from Funko's Vinyl SODA line. Vinyl SODA ended up being one of my top 10 favorite toylines of 2020 and, with lots of MOTU releases for 2021, they look like they're on track to make the list again. The first of the five Masters of the Universe in sleek, SODA form I'm checking out is Webstor, the Evil Master of Escape. I remember getting Webstor for Christmas as a kid one year when I was quite young (probably 1987 or 1988) and while he's never been one of my top favorites I'm still always glad to see him. Webstor is one of those Evil Warriors that just doesn't pop up all of the time. Released as part of Funkon 2021 he was also a shared exclusive with Toy Tokyo, which is where I got mine. He was part of a big bundle along with the POP! Roboto, POP! Whiplash, and some other stuff I've tried to sell off. There's a glow in the dark variant released as well (only 800 of them) but I ended up with the standard Webstor. Ready to check out Webstor (AKA Araneus, son of Raknus) after the break? 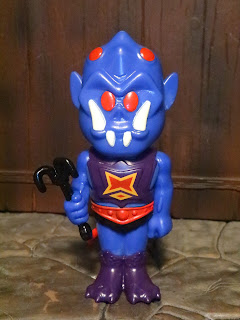 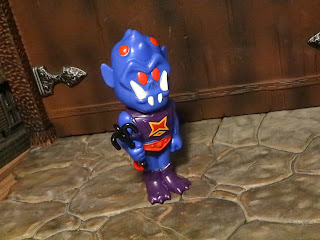 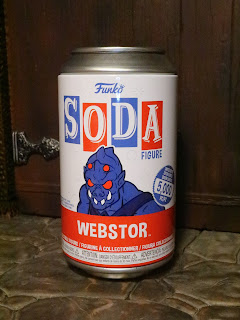 * I'm still loving the cans these come in! The soda can design is incredibly cool and makes for a rather unique display piece on a shelf. What would Webstor soda taste like? I'm thinking it would be a very carbonated (like overly carbonated) blueberry soda. Not blue raspberry, but very sweet with an intense flavor with the "web-like" heavy carnation helping to mellow it out a bit. The can displays all of the expected labels while the back shows off the figure and includes all of the legal info, etc. The top of the can separates so you could use the can to store trinkets as well, and it's even sculpted to look like the top of a soda can. It's made from a much more durable metal than your average soda can, too, so it's quite a nice collectible. 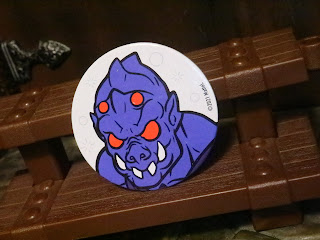 * Inside the can is a round, sturdy cardboard disc. It's kind of like a POG, though a bit larger. On the front is Webstor's creepy mug while the back has the figure's name and the edition size. 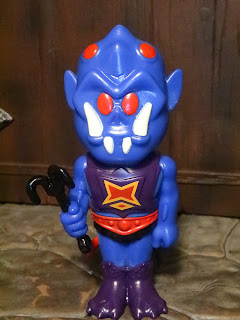 * Webstor looks fantastic in the Vinyl SODA style. The shade of blue he's molded in is just perfect and the details on his armor his trunks are fantastic. The red and orange details nicely standout against his dark blue body and deep purple armor. I think I was today year's old when I realized that the symbol on his armor is supposed to look like the markings on a Black Widow spider. He's standing at attention, like everyone else, and is carrying his grappling hook in his right hand. I'm a little disappointed that he doesn't have his classic orange rifle, though. I always liked how it stood out on the figure. It made Webstor seem like a sniper. You know, use his grappling hook to get up to some high place and pick off the Heroic Warriors one by one. 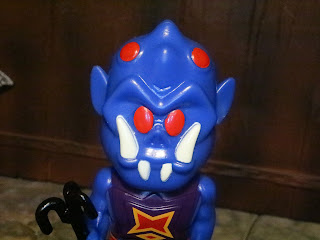 * The headsculpt is fantastic. I like all of the ridges and detail in his face and on top of his head. The creepy teeth look excellent as do his multiple eyes. 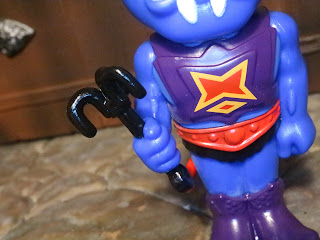 * Here's a close-up of the grappling hook which is something the vintage toy did have (it was attached to his backpack via a string) and it was integral to his action feature. Did you know early designs for Webstor had the string actually running right through the top of his head? 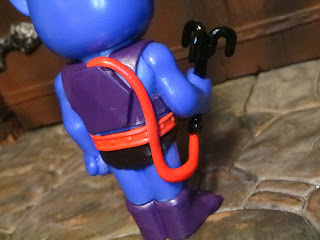 * Flip Webstor around and you can see the back of his Fast Pack with a red cable running from the top to his grappling hook. 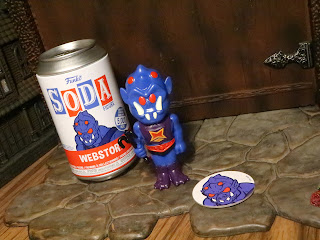 I really like Webstor and he turned out wonderfully in the Vinyl SODA line. He's a Great and a 1/2 figure and a worthy addition to the Evil Warriors. Funko is really offering up quite a few characters in this line and I'm hopeful they'll attempt to complete the vintage line as well as delve into Princess of Power. Wouldn't the Great Rebellion crew and the Evil Horde look great in this style? Anyways, Webstor is cool and my only complaint is that I wish he had his orange laser rifle like the vintage toy had. Otherwise, he's spectacular.

Webstor is just starting to get some respect around here. For more Webstor reviews check out the Funko POP! Webstor #997 and Webstor #997 (Metallic).